CBSE Class 12 Physics Thermal Expansion Theory and Examples. Please refer to the examination notes which you can use for preparing and revising for exams. These notes will help you to revise the concepts quickly and get good marks.

1. INTRODUCTION
Solids are made of atoms and molecules. At a given temperature, the atoms and molecules are placed at some equilibrium distance. When heat is supplied to solid, the interatomic separation increases by which there is an expansion of solids. This expansion can be in terms of length/area/volume.

where α is temperature coefficient of linear expansion at 0ºC. Here t should be in ºC only because initial temperature is taken as 0ºC.

3. APPLICATION OF LINEAR EXPANSION
3.1 Differential expansion of two solid rod
(1) Suppose there are two rods of length l1 and l2.The first rod is kept on the other such that the initial separation between the free ends of the
rod is S = l2 – l1

Both the rods are initially at a temperature of t1ºC. On heating the entire system, the temperature increases to t2 such that the length of both the rod increases. So, if the new length of the rod be 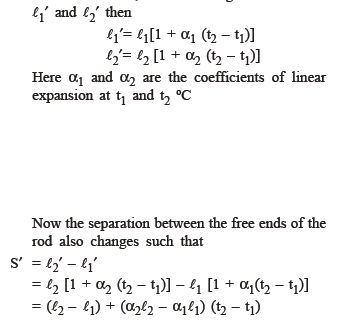 3.2 Radius of Bimetallic strip
If two strips of different metals are welded together to form a bimetallic strip, when heated uniformly it bends in the form of an arc, the metal with greater coefficient of linear expansion lies on convex side. The radius of arc thus formed by bimetal is 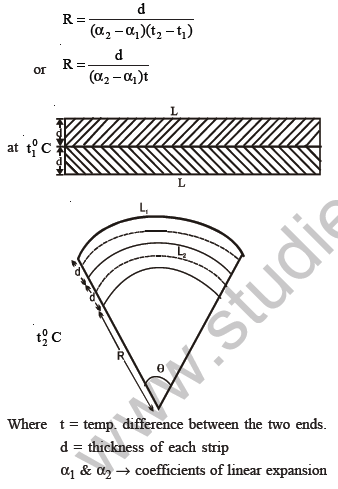 Ex. 2 A metal sheet with a circular hole is heated. The hole

(A) Gets larger
(B) Gets smaller
(C) Remains of the same size
(D) Gets deformed
Sol. (A) When a body is heated, the distance between any two points on it increases. So due to thermal expansion of solids, the hole gets larger.

Ex. 3 Two identical rectangular strips one of copper and other of steel are riveted together to form a bimetallic strip (αcopper > αsteel). On heating this strip will

(A) Remains straight
(B) Bend with copper on convex side
(C) Bend with steel on convex side
(D) Get twisted
Sol. (B) When a bimetallic strip of different metals is heated, the strip bends due to unequal linear expansion of the two metals. The strip will bend with metal of greater α on the convex side i.e. outer side.

(1) When a rod is heated or cooled, it expands or contracts. It is turned as free expansion of the rod 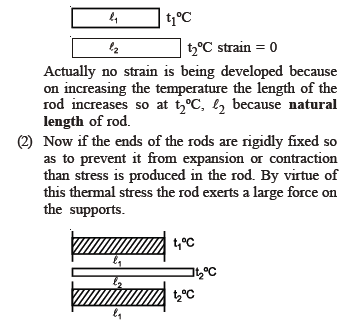