Class 12 Social Science students should refer to the following printable assignment in Pdf for Novels Society And History in standard 12. This test paper with questions and answers for Grade 12 Social Science will be very useful for exams and help you to score good marks

Short Answers Type Questions
Q.1: - “Novels were useful for both the colonial administrators and Indians in colonial India.” Support the statement with example.
Ans.:- To colonial administration –
1. A source to understand native life and customs.
2. It helped to govern Indian society with various communities and castes.
3. Novels helped to know the domestic life dresses religious worships etc.
4. Some of the books were translated into English by British administrators or Christian missioners.
To Indians –
1. Indians used the novels as a powerful medium to criticize defects what they considered in the society and to suggest remedies.
2. To established relationship to its past.
3. To propagate their ideas about society.
4. It glorified the accounts of the past and helped in creating sense of National Pride among the readers.
5. Novels helped in creating a sense of collective belongingness on the basis of one’s language.
Any other relevant point.
Q.2: - Explain how did novels became a popular medium of entertainment among the middle class during late 19th century.
Ans.:-
1. The world created by novels were absorbing, believable and seemingly real.
2. While reading novels, The readers was transported to another person’s world and began looking at life as it was experienced by the characters of the novel.
3. Novels allowed individuals the pleasure of reading in private as well as publicity.
4. The storied of novels were discussed in homes meetings or even in offices.
Q.3: - What were the advantages of serialized novels—
Ans.:-
1. A story is published in installments, keeping the suspense for the next issue.
2. Serialization allowed readers to relish the suspense discuss the characters of a novel and live for weeks with their stories.
3. This was possible science the magazines were illustrated and cheap and affordable.
Q.4: - What were the advantages of vernacular novels?
Ans.:-1. They were written in the language of common people.
2. Vernacular novels produced a sense of shared world between diverse people of a nation.
3. Novels also draw from different styles of languages. A novel may tale a classical language and combine it with the language of street to make them all a part of vernacular that it uses.
4. Novels were read individually. Sometimes in groups also.
Long Answers Type Questions
Q.1:- Explain the contribution of Premchand in Hindi novels.
Ans.:-1. Munshi Premchand was one of the greatest literary figures of modern Hindi and Urdu literature.
2. He began writing in Urdu and then shifted to Hindi.
3. His novels lifted the Hindi novels from the realm of fantasy.
4. Premchand wrote on the realistic issues of the day i.e. communalism, corruption, zamidari dept, poverty and colonialism etc.
5. He wrote in traditional art of “Kissa - Goi”.
Q.2: - How ‘Industrial Revolution’ was reflected in the novels?
Ans.: -
1. When Industrial Revolution began factories came up, business profits increased but workers faced problems.
2. Cities expanded in an unregulated way and were filled with over worked and unpaid workers.
3. Deeply critical of these developments, novelists such as Charles Dickens wrote about terrible effects of industrialization on people’s lives and characters.
4. His novel ‘Hard Times’ depicts a fictions industrial town as a grim full of machinery, smoking chimneys and rivers polluted.
5. Dickens criticized not just the greed for profit but also the ideas that reduced human beings into simple instruments of production.
6. Dickens’ ‘Oliver Twist is the tale of poor orphan who lived in a world of petty criminals and beggars. Oliver was finally adopted by a wealthy man and lived happy ever after.
7. Emili Zola’s ‘Germinal’ was written on the left of a young miner but it ends up in desire. It didn’t have happened like Oliver Twist of Dickens. 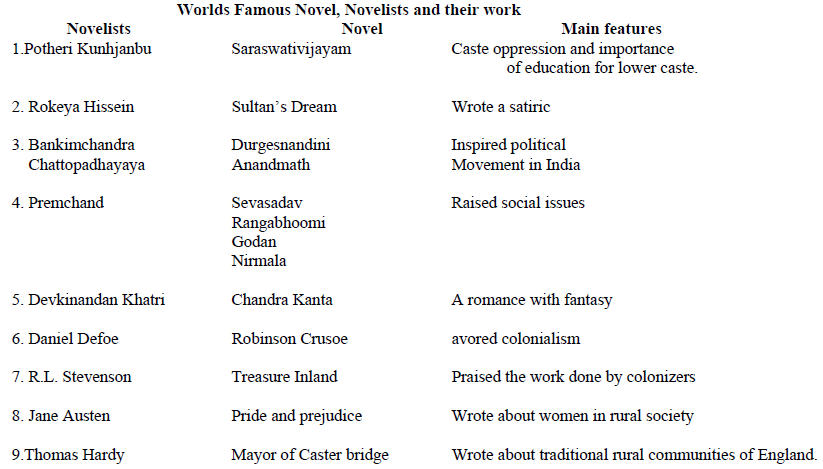