Class 12 Social Science students should refer to the following printable assignment in Pdf for Agriculture in standard 12. This test paper with questions and answers for Grade 12 Social Science will be very useful for exams and help you to score good marks

Question : Which one of following is not Agro-based industry:
(a) Cement Industry    (b) Jute Industry   (c) Cotton textile Industry   (d) Sugar Industry
Answer : A

Question : It’s type of Agriculture where farmers clear a patch of and produce rereads and other food crops to sustain that family that is:
(a) Commercial farming   (b) Extensive farming   (c) Modern farming   (d) Slash and burn farming
Answer : D

Question : Maximum consumption of natural rubber is made of –
(a) Auto tyres & tubes   (b) Footwear   (c) Beats and hoses   (d) Dipped goods
Answer : A

Fill In The Blank

DIRECTION : Read each of the following statements and write if it is true or false.
Question : Intensive subsistence farming is a bush or tree farming.
Answer : False
Question : Kharif crop requires temperature between 21°C to 27°C.
Answer : True

Assertion and Reasoning Based Questions

Question : Name the crops for which India is the largest producer in the world.
Answer : Fruits and vegetables, oilseeds and pulses
Question : Describe ‘Jhumming cultivation’ in one sentence.
Answer : ‘Slash and burn’ cultivation in North- Eastern states of India.
Question : By which other name is ‘slash and burn’ agriculture known?
Answer : Primitive subsistence farming/jhumming (Any one)
Question : Hoe, dao, digging sticks are associated with which type of farming?
Answer : Primitive subsistence farming.
Question : Which crop is the major crop of rabi?
Answer :  Wheat
Question : Name one staple crop of India and the regions where it is produced.
Answer : Rice is the staple crop of the people of the eastern and southern parts of the country.
It is grown in West Bengal, Uttar Pradesh, Andhra Pradesh, Assam and Punjab.
Question : Find out the importance of pulses in agricultural pattern in India.
Answer : Pulses are mostly grown in rotation with other crops because as leguminous crops, they fix nitrogen from the air with soil and restore the soil fertility. It also provides agronomic benefits to the succeeding crop in terms of better soil microenvironment, quality and yield.

Question : Discuss three main impacts of globalization on Indian agriculture.
Answer :   1. Indian agriculture products are not able to compete with the developed countries.
2.Bad condition of marginal and small farmers
3.Caused land degradation due to overuse of chemicals.

Question : Why has Indian agriculture started a declining trend in food production? Explain with any three reasons.
Answer : Indian agriculture started a declining trend in food production as
i. Indian farmers are facing a big challenge from international competition.
ii. The quality of our production is not able to compete with those of the developed countries.
iii. Subsidy on fertilizers, pesticides and HYV has been decreased, it lead to increase in the production cost.
iv. More and more cultivable lands have been converted into factories, residential area, which has reduced the area under cultivation.
v. The productivity of land has also started to decline due to various new diseases inspite of many insecticides that have been used to control these crop diseases.
vi. Periodic scarcity of water has led to reduction in area under irrigation
Question : Some features are marked on the map of India given below. Identify them with the help of the following information and write their correct names on the lines marked on the map.
i. A major wheat producing state
ii. A major producer of jute
iii. The state which is the major producer of coffee 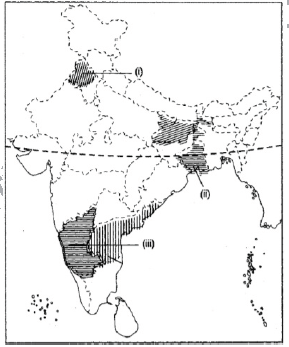 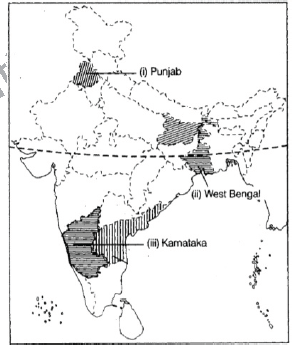 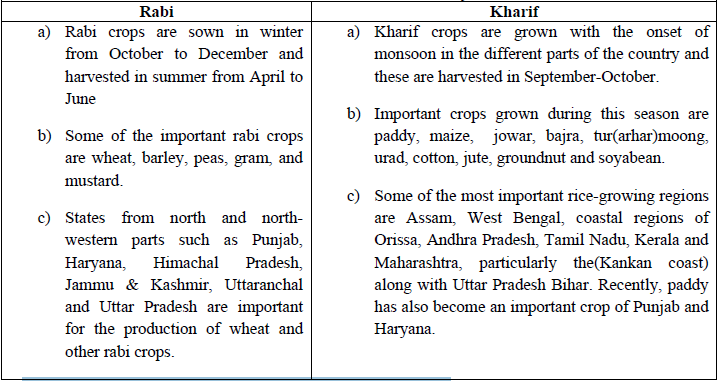 Question : What is Horticulture? Name the fruits grown in India?
Answer : “Horticulture:-It is an art of cultivating fruits and vegetables. India is the largest producer of fruits and vegetables in the world. India is the producer of tropical as well as temperate fruits.”
India is known for
- Mangoes - Maharashtra, Andhra Pradesh, Uttar Pradesh and West Bengal.
- Oranges - Nagpur and Cherrapunjee (Meghalaya),
- Bananas- Kerala, Mizoram, Maharashtra and Tamil Nadu,
-Lichi and guava- Uttar Pradesh and Bihar,
-Pineapples - Meghalaya,
-Grapes - Andhra Pradesh and Maharashtra
-Apples, pears, apricots, and walnuts - Jammu & Kashmir and Himachal Pradesh are in great demand all over the world.
India produces about 13 per cent of the world vegetables. It is an important producer of pea, cauliflower, onion, cabbage, tomato, brinjal and potato.
Question : Distinguish between Subsistence and Commercial agriculture.
Answer :

Question : What are the four important fiber crops of India? Describe any one of them.
Answer :  four important fiber crops of India are:
Cotton, Jute, Hemp and Natural silk.
Cotton:-
(a) India is known as the original home of the cotton plant.
(b) India is the third largest producer of cotton in the world.
(c)Cotton grows well in the drier parts of the black cotton soil of the Deccan plateau.
(d) It requires high temperature, light rainfall or irrigation, 210-frost-free days and bright sun-shine for its growth.
(e) It is Kharif crop and requires 6 to 8 months to mature.
(f) Major Cotton producing states are Maharashtra, Gujarat, Madhya Pradesh, Karnataka, Andhra Pradesh,Tamil Nadu, Punjab, Haryana and Uttar Pradesh.
OR
Jute:-
(a) Jute is known as the golden of fiber.
(b) It grows well on well-drained fertile soil in the flood plains where soils are renewed every year.
(c) High temperature is required during the time of growth.
(d) Major jute producing states are West Bengal, Bihar, Assam, Orissa and Meghalaya.
(e) It is used in making gunny bags, mats, ropes, yarn, carpets and other artifacts.
Question :  Define plantation agriculture. Explain any four characteristics of plantation agriculture.
Answer : Plantation Agriculture: Plantation agriculture is a form of commercial farming in tropical and sub-tropical regions.where crops are grown for profit. Large land areas are needed for this type of agriculture. It was introduced by the British in India.
Characteristics:
a. A single crop is grown over a large area.
b. It refers to the large scale, capitalised and often highly centralised cultivation in the plantations of cash crops for export.
c. All produce is used raw material in industries such as tea, coffee, rubber, sugarcane, banana etc.
d. Plantation has interface of agriculture and industry both.