1.Until 18th century which two countries were considered the richest in the world?
(a) India and China
(b) China and Japan
(c) England and France
(d) England and Italy
Ans :(a)
2.Why were the Europeans attracted to Africa?
(a) By its natural beauty
(b) By the opportunities for investment
(c) For its vast land resources and mineral wealth
(d) For recruitment of labour
Ans :(c)
3.Transport of perishable goods over long distance was possible because of
(a) improved railways
(b) airline services
(c) refrigerated ships
(d) steam ships
Ans :(c)
4.The World Bank was set-up to
(a) finance rehabilitation of refugees.
(b) finance post war construction.
(c) finance industrial development.
(d) help third world countries.
Ans :(b)
5.The Chutney music was popular in ____________ and ______________.
Ans :Trinidad and Guyana
6.Before the war, _____________ was a major supplier of wheat in the world market.
Ans :eastern Europe
7.The method used by Henry Ford for faster and cheaper automobile production was known as_________________.
Ans :assembly line
8.Peru was called the city of gold. (True/False)
Ans :False
9.The silk route helped in cultural and commercial exchange. (True/False)
Ans :True
10.Second World War did not result in economic devastation and social disruption. (True/False)
Ans :False
11.Match the columns.

12.Most Indian indentured workers came from:
(a) Eastern Uttar Pradesh
(b) North-eastern states
(c) Jammu and Kashmir
(d) None of these
Ans :(a)
13.Who adopted the concept of an assembly line to produce automobiles?
(a) Henry Ford         (b) Karl Benz
(c) V.S. Naipaul        (d) Samuel Morse
Ans :(a)
14.______________ travelled west from China to be called “Spaghetti’.
Ans :Noodles
15.Tax imposed on a country’s imports from the rest of the world is called_______________.
Ans : tariff
16.Britain was the world’s leading economy during the pre-First World War period. (True/False)
Ans :True
17.The IMF and the World Bank were designed to meet the financial needs of the industrial countries. (True/False)
Ans :True
18.The person who got people from village, ensured them jobs, helped them settle in cities and provided them money in times of need was known as:
(a) Stapler (b) Fuller
(c) Gomastha (d) Jobber
Ans :(d)
19.Why did Manchester export to India decline after the First World War?
(a) People were busy fighting the war.
(b) Factories closed down due to security problem.
(c) Factories and mills were busy producing goods to fulfill the need of army.
(d) Export trade was restricted by the government.
Ans :(c)
20.Why were workers in England hostile to machines and new technology?
(a) They did not know how to use these.
(b) They feared that they would lose their jobs and livelihood.
(c) The workers were too poor to buy new machines.
(d) They were scared of machines.
Ans :(b)
21.Why were there frequent clashes between the gomastha and the weavers?
(a) The weavers hated foreigners.
(b) The gomastha forced the weavers to sell goods at a dictated price.
(c) Gomasthas were outsiders without long term social link with the village.
(d) None of the above.
Ans :(c)
22.From which of the following trade did the early entrepreneurs make a fortune?
(a) Textile trade      (b) China trade
(c) Trade in tea       (d) Industries
Ans :
(b)
23.Which of the following was a European managing agency?
(a) Tata Iron and Steel Company
(b) Andrew Yule
(c) Elgin Mill
(d) Birla industries
Ans :(b)
24.Guilds were associations of ____________.
Ans :traders
25.______________ was a mechanical device used for weaving.
Ans :Fly shuttle
26.Manchester in England was well-known for ____________.
Ans :textile production
27.In Bengal, Dwarakanath Tagore made his fortune in China Trade. (True/False)
Ans :True
28.G.D. Birla was a Parsi entrepreneur who built huge industrial empire in India. (True/False)
Ans :False
29.Advertisements make the products appear desirable and necessary. (True/False)
Ans :True
30.Match the columns. 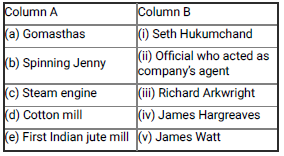 Ans :(a) (ii), (b) (iv), (c) (v), (d) (iii), (e) (i)
31.By late 19th century why did the British manufacturers print calendars for advertisements?
(a) Indian people were fond of using calendars in their houses.
(b) Unlike newspapers and magazines, calendars were used even by people who did not know how to read or write.
(c) It was cheaper to advertise goods through calendars.
(d) It used to add beauty to the room.
Ans :(b)
32.Which of the following innovations helped the weavers in increasing productivity and compete with mill sector?
(a) Spining jenny (b) Fly shuttle
(c) Cotton Gin (d) Roller
Ans :(b)
33.The yarn produced in Indian industries was exported to __________________.
Ans :China
34.The expansion of railways boosted the growth of __________ and __________ industries.
Ans :iron and steel
35.When there is plenty of labour, wages are low. (True/False)
Ans :True
36.In European society, members of the royal family are referred as ‘bourgeoisie’. (True/False)
Ans :False
37.Who was Marcopolo?
(a) German scientist
(b) English philosopher
(c) Spanish explorer
(d) Italian traveller/explorer
Ans :(d)
38.Who wrote about the injustices of the caste system in ‘Gulamgiri’?
(a) Raja Rammohan Roy
(b) Jyotiba Phule
(c) Balgangadhar Tilak
(d) Bankim Chandra Chattopadhyay
Ans :(b)
39.Which of the following refers to print revolution?
(a) Invention of printing press
(b) Shift from hand printing to mechanical printing
(c) Revolt of people against printed matters
(d) Handwritten manuscripts for printed books
Ans :(b)
40.Aim of Protestant Reformation was to:
(a) reform religion
(b) reform the Catholic church
(c) reform Jewish religion
(d) to protest against all reform
Ans :(b)
41.Why was James Augustus Hickey persecuted by Governor General Warren Hastings?
(a) For poor editing of Bengal Gazette
(b) For publishing a lot of gossip about company’s Senior Official
(c) For publishing substandard material
(d) None of these
Ans :(b)
42.By whom was ‘Sambad Kaumudi’ published in 1821?
(a) Iswer Chandra Vidyasagar
(b) C.R. Das
(c) Raja Rammohun Roy
(d) Swami Vivekanand
Ans :(c)
43.In ancient India which of the following material was used for writing manuscripts?
(a) Parchments (b) Vellum
(c) Palm leaves (d) Paper
Ans :(b)
44.Skilled hand writers were known as _________.
Ans :scribes
45._____________ was the Latin scholar who expressed deep anxiety about printed book.
Ans :Erasmus
46.‘Amar Jiban’ is the autobiography of_____________.
Ans :Rashsundari Debi
47.Amar Jiban was the autobiography written by Rashsundari Debi. (True/False)
Ans :True
48.Vellum is the parchment made of animal skin. (True/False)
Ans :True
49.Monnocchio said “The printing press is the most powerful engine of progress”. (True/False)
Ans :False
50.Match the columns.

1. In what three ways the print culture help in creating conditions for the French revolution of 1789 ? Explain any three ways.

2. Liberty of speech ---- Liberty of press ---- Freedom of association. The government of India is now seeking to crush the three powerful vehicles of cultivating public opinion. The fight for swaraj means a fight for this threatened freedom.

(i) Who said the above statement?

(ii) Why was government truing to crush the vehicles? Give two reasons.

3. Highlight any three contributions of Print culture in the growth of nationalism in India? How did the British rulers attempt to check it.

4. “Politics and social division should not be allowed to mix.” Give three arguments in favour of your answer.

5. Identify and justify the three areas where Indian women are yet discriminated.

1) What types of soil is found in the river deltas of the Eastern Coast? Give two main features of this type of soil.

3) Describe how communities have conserved and protected forests and wildlife in India.