Anomalous behaviour of first member of

Anomalous behaviour of first element in the p-block elements is attributed to small size, large (charge/radius) ratio, high ionization enthapy, high electronegativity and unavailability of d-orbitals in its valance shell.

1. The first element in p-block element has four valence orbitals i.e. one 2s and three 2p, Hence maximum covalency of the first element in limited to four. The other elements of the p-block elements have vacant d-orbitals in their valence shell, e.g. elements of the third period have nine (9) one 3s, three 3p and five three 3d orbitals. Hence these show maximum covalence greater than four. Following questions can be answered -

(iii) Though nitrogen forms pentoxide but it does not form pentachloride. Explain. Why?

(iv) Fluorine forms only one oxoacid while other halogens form a number of oxoacids. Why?

This is because p-orbitals of the heavier members are so large and diffuse that they cannot have effective sideways overlapping. Heavier members can form pπ– dπbonds with oxygen. 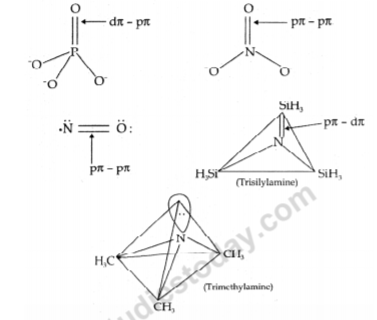 Now, the following questions can be explained using the above reasoning-

(i) Nitrogen forms N2 but phosphorus forms P4 at room temperature. Why?

(ii) Oxygen forms O2 but sulphur exists as S8. Why?

3. Due to small size and high electronegativity and presence of lone pair(s) of electrons, elements N, O, F when bonded to hydrogen atom, forms intermolecular hydrogen bonds which are stronger than other intermolcular forces. This results in exceptionally high m.p. and b.p. of the compounds having N–H/O–H/F–H bonds.

Please click the link below to download pdf file for CBSE Class 12 Chemistry notes and questions for The p block Elements Part D.

Download Printable Worksheets, test papers for Class 12 Chemistry with questions answers for all topics and chapters as per CBSE, NCERT, KVS sylabus
More..

The intend of this article is to guide the students about the course of action they should follow once they receive the CBSE question papers in the school as well as board examination centre. Before initiating the examination there are few key aspects which the...

CBSE has launched a Quiz on Mahatma Gandhi. The quiz portal can be accessed on Discover Gandhi portal at: https://discovergandhi.in/ DIKSHA platform (https://diksha.gov.in) and the Discover Gandhi mobile App which can be easily downloaded from Google Play Store on...

With a larger goal to promote 21st century skills such as critical thinking and problem solving, the Central Board of Secondary Education has shared a Mathematical Literacy: Practice Book for Students. This Work Book is designed to allow learners of classes 7th to 10th...

The intend of this article is to present before you the 5 most efficient tips to facilitate the students to revise the entire course for the Annual School and Board Examination.  We are moving towards the upcoming examinations, almost all the academic institutions of...

The National Mission for Clean Ganga (NMCG) is organising the annual ‘Ganga Utsav’ on November 2nd , 3rd & 4th, 2020 on a virtual platform. The Utsav will involve storytelling, folklores, & dialogues with eminent personalities, quizzes, display of traditional...