CBSE Class 12 Chemistry - Coordination Compounds Chapter Notes. Learning the important concepts is very important for every student to get better marks in examinations. The concepts should be clear which will help in faster learning. The attached concepts made as per NCERT and CBSE pattern will help the student to understand the chapter and score better marks in the examinations. 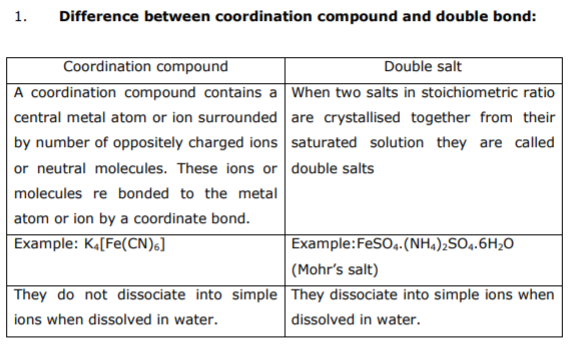 4. Ligands: A molecule, ion or group that is bonded to the metal atom or ion in a complex or coordination compound by a coordinate bond is called ligand. It may be neutral, positively or negatively charged. Example: H2O, CN-, NO+ etc.

5. Donor atom: An atom of the ligand attached directly to the metal is called the donor atom. For example: in the complex K4[Fe(CN)6], carbon is a donor atom.

8. Counter ions: The ions present outside the coordination sphere are called counter ions. For example: in the complex K4[Fe(CN)6], K+ is the counter ion.

11. Denticity: The number of ligating (linking) atoms present in ligand is called denticity.

13. Didentate ligands: The ligands which contain two donor atoms or ions through which they are bonded to the metal ion. For example: ethylene diamine (H2NCH2CH2NH2) has two nitrogen atoms, oxalate ion has two oxygen atoms which can bind with the metal atom. | COO-  - COO-