CBSE Class 9 Science Structure of atoms Notes. There are many more useful educational material which the students can download in pdf format and use them for studies. Study material like concept maps, important and sure shot question banks, quick to learn flash cards, flow charts, mind maps, teacher notes, important formulas, past examinations question bank, important concepts taught by teachers. Students can download these useful educational material free and use them to get better marks in examinations.  Also refer to other worksheets for the same chapter and other subjects too. Use them for better understanding of the subjects.

STRUCTURE OF THE ATOM

Atoms are the basic units of matter and the defining structure of elements. Matters are made of tiny particles called atom. Atom is made of three particles; electron, proton and neutron. These particles are called fundamental particles of an atom or sub atomic particles.

Electron (e–) - Electron is denoted by ‘e’ and is a negatively charged particle. The absolute charge over an electron is equal to 1.6x10-19 of negative charge and is considered equal to – 1.

The relative mass of electron is 1/1836. Since the mass of an electron is very small, thus it is considered equal to 0. Electrons revolve round the nucleus of atoms.

Proton (p+) - Proton is denoted by ‘p’ and is positively charged particle. The absolute charge over proton is 1.6x10 -19 coulomb of positive charge and it is considered as unit positive charge.

Thus absolute charge over a proton is equal to +1.

The absolute mass of a proton is equal to 1.6x10 -24 g and considered equal to 1 as it is equal to the mass of 1 hydrogen atom. Proton is present in the nucleus of atom.

Neutron (n) – Neutron is denoted by ‘n’ and is a neutral particle. 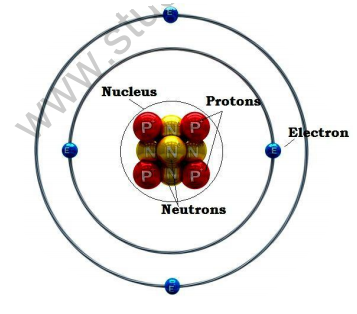 Q1. What are canal rays?