3. What are inner transition elements?
• The elements in which the extra electron enters (n-2)f orbitals are called f-block elements.
• These elements are also called as inner transition elements because they form a transition series within the transition elements.
• In the inner transition elements there are two series of elements.
1) Lanthanoids (Previously called lanthanides)
2) Actinoids (Previously called actinides)
4. Justify the position of lanthanides and actinides in the periodic table.
• The actual position of Lanthanoids in the periodic table is at group number 3 and period number6.
• In sixth period after lanthanum, the electrons are preferentially filled in inner 4f sub shell and these fourteen elements following lanthanum show similar chemical properties. Similarly, the fourteen elements following actinium resemble in their physical and chemical properties.
• Therefore these elements are grouped together and placed at the bottom of the periodic table.
• This position can be justified as follows.
1. Lanthanoids have general electronic configuration [Xe]4f1-14 5d0-16s2
2. The common oxidation state of Lanthanoids is+3
3. All these elements have similar physical and chemical properties. Hence a separate position is provided to the inner transition elements.
5. What are actinides? Give three examples.
The fourteen elements following actinium, i.e. from Thorium (Th) to Lawrentium (Lr) are called actinoids.
Examples : Thorium (Th), Uranium (U) and Plutonium (Pu)
6. Why Gd3+ is colourless?
Electronic configuration of Gd is [Xe]4f75d16s2
Electronic configuration of Gd3+ is [Xe] 4f75d6s
In Gd3+, no electrons are there in outer 5d orbitals.
d-d transition is not possible. So Gd3+ is colourless.
7. Explain why compounds of Cu2+ are coloured but those of Zn2+ are colourless. 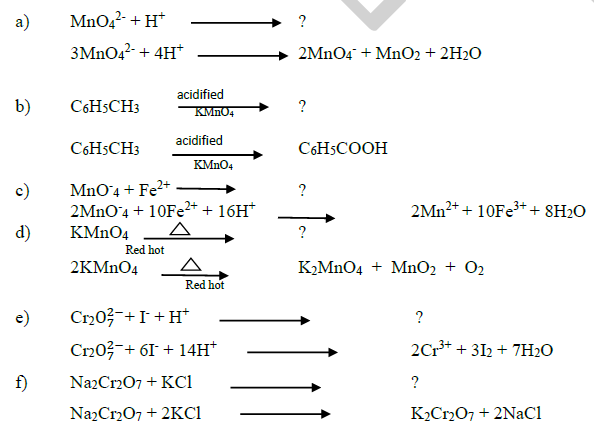 16. Explain the variation EOM3+/M2+in 3dseries
• The standard electrode potential for the M3+/M2+ half cell gives the relative stability between M3+ and M2+.
• The negative values for titanium, vanadium and chromium indicate that the higher oxidation state is preferred. If we want to reduce such a stable Cr3+ ion, strong reducing agent which has high negative value for reduction potential like metallic zinc (E=- 0.76V) is required.
• The high reduction potential of Mn3+ / Mn2+ indicates Mn2+ is more stable than Mn3+. For Fe3+ / Fe2+ the reduction potential is 0.77V, and this low value indicates that both Fe3+ and Fe2+ can exist under normal conditions.
17. Compare lanthanides and actinides. 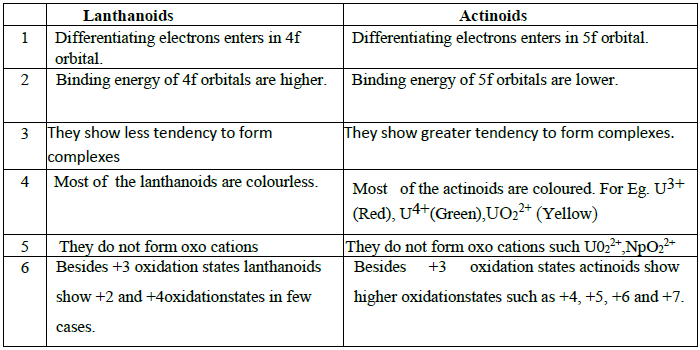 18. Explain why Cr2+ is strongly reducing while Mn3+ is strongly oxidizing.
Cr2+ is reducing as its configuration changes from d4 to d3, the latter having a half filled t2g level. On the other hand, the change from Mn2+ to Mn3+ results in the half – filled (d5) configuration which has extra stability.
19. Compare the ionization enthalpies of first series of the transition elements.
Ionization energy of transition elements is intermediate between those of s and p block elements. As we move from left to right in a transition metal series, the ionization enthalpy increases as expected. This is due to increase in nuclear change corresponding to the filling of d electrons.

24. Which is stronger reducing agent Cr2+ or Fe2+?
If the standard electrode potential (EO) of a metal is large and negative, the metal is a powerful reducing agent, because it loses electrons easily.

Since Cr2+ has larger negative value of E, Cr2+ is a stronger reducing agent than Fe2+.
25. The

value for copper is positive. Suggest a possible reason for this.
E M2+/M for any metal depends upon the sum of the enthalpy changes taking place in the following steps.

Copper possesses a high enthalpy of atomization and low enthalpy of hydration. Hence ECu2+/Cu is positive.
26. Predict which of the following will be coloured in aqueous solutions Ti2+, V3+,Ti3+, Cu+, Sc3+, Fe3+, Ni2+ and Co3+ 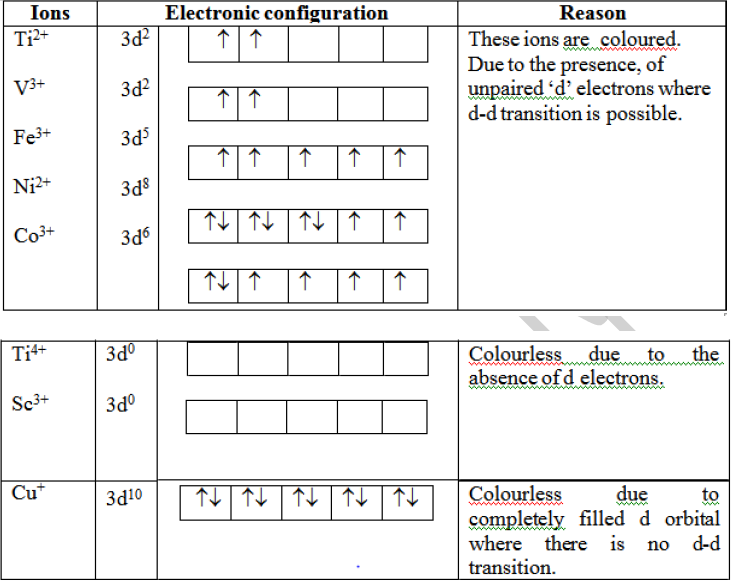 Number of unpaired electrons are two (n = 2)
8. Name the catalyst used for the following reaction?

14.What is the action of heat on K 2Cr2 O7?
On heating it decomposes and forms Cr2O3 and molecular oxygen

16.a. Which element in 3d series does not form ionic metal oxide ?
b. What is the acid formed when Mn2O7 dissolved in water?
a. Scandium
b .Mostly higher oxide are acidic. Mn2O7 dissolved in water to give permanganic acid (HMnO4)
17. Why d orbitals containing symmetrical distribution of electron is more stable?
When the d – Orbitals are considered together, they will constitute a sphere. So the half filled and fully filled configuration leads to complete symmetrical distribution of electron density. An unsymmetrical distribution of electron density will result in building up of a potential difference. To decrease this and to achieve a tension free State with lower energy, a symmetrical distribution is preferred.
18. In first transition series from Sc to V atomic radius decreases, thereafter up to Cu atomic radius nearly the same. Why ?
The added 3d electrons only partially shield the increased nuclear charge and hence the effective nuclear change increases slightly. At the same time the extra electrons added to the 3d sub shell strongly repel the 4s electron These two forces are operated in opposite direction As they tend to balance each other it leads to constancy in atomic radius
19.Which is more acidic in nature MnO(Mn2+) or Mn2O7 (Mn7+) why?
Mn2O7 is more acidic in nature. Acidic strength increases with increase in oxidation state of the element. In higher oxidation state there is no scope for further loss of electron, rather it can accept electrons. So it is more acidic in nature.
20.Classify the following oxides as acidic, basic and amphoteric oxides?
i.CrO  ii. Cr2O3  iii.CrO3
i. CrO –Basic oxide
ii.Cr2O3 – Amphoteric oxide
iii. CrO3 – Acidic oxide
21. Calculate spin magnetic moment of Co2+? 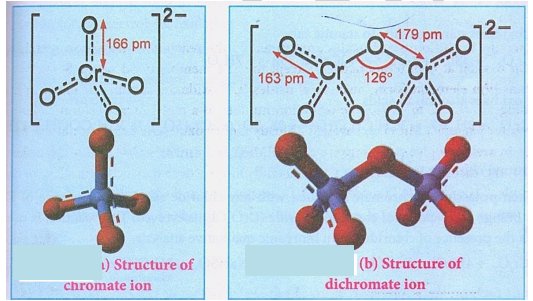 28. HCl and HNO3 are not used for generating acidic medium for KMnO4Why ? Suggest suitable acid medium for KMnO4?
HCl cannot be used. Since It reacts with KMnO4
2MnO4- + 10Cl- + 16H+ → 2Mn2+ + 5Cl2 +8H2O
HNO3 also cannot be used since it is a good oxidizing agent and react with reducing agents in the reaction.
H2SO4 is the most suitable acid since it does not react with potassium permanganate
29. Calculate the equivalent weight of KMnO4 ?

30. Write the uses of KMnO4?
i. It is used as a strong oxidizing agent.
ii. It is used for the treatment of various skin infections and fungal infections of the foot.
iii. It used in water treatment industries to remove iron and hydrogen sulphide from well water.
iv. It is used as a Bayer’s reagent for detecting unsaturation in an organic compound.
v. It is used in quantitative analysis for the estimation of ferrous salts, oxalates, hydrogen peroxide and iodides.
31. Complete the following reaction and give the balanced equation?

32. What is the hybridization in Mn7+ ion of KMnO4 and what is the structure of permanganate ion?
Permanganate ion has tetrahedral geometry in which the central Mn7+ is sp3 hybridised.
33. Compound A is an orange red crystalline solid which on heating with NaCl and conc H2SO4 evolves red orange vapours B. On passing the vapors of B into a solution of NaOH and then adding the solution of acetic acid and lead acetate, yellow precipitate C is obtained. Identify A,B, andC. Give chemical equations for these reactions What is the name of this test?

34.What are the properties of Interstitial compound?
They are hard and show electrical and thermal conductivity
i. They have high melting points higher than those of pure metals
ii. Transition metal hydrides are used as powerful reducing agents
iii. Metallic carbides are chemically inert.
35. Complete the following reactions and give the balanced equations?

36. What is Hume- Rothery rule to form a substitute alloy?
i. The difference between the atomic radius of solvent and solute is less than 15%
ii. Both the solvent and solute must have the same crystal structure and valence.
iii. The eletronegativity difference between solvent and solute must be close to zero.
37.What are the uses of potassium dichromate?
i. It is used as a strong oxidizing agent.
ii. It is used in dyeing and printing.
iii.It used in leather tanneries for chrome tanning.
iv.It is used in quantitative analysis for the estimation of iron compounds and iodides.

The intend of this article is to guide the students about the course of action they should follow once they receive the CBSE question papers in the school as well as board examination centre. Before initiating the examination there are few key aspects which the...

The intend of this article is to let us know the significance of writing within the prescribed word limit while attempting the CBSE Board Examination. Every single question in the board examination has a pre-specified word limit and every student needs to understand...