1. Write a short note on anamolous properties of the first element of p-block.
(i) Small size of the first member
(ii) High ionization enthalpy and high electronegativity
(iii) Absences of d-orbital in their valence shell
2. Describe briefly allotropism in p-block elements with specific reference to carbon.
Some elements exist in more than one crystalline or molecular forms in the same physical state. This phenomenon is called allotropism and the different forms of an element are called allotropes.
Eg: carbon exist as diamond, graphite, graphene, fullerenes and carbon nanotubes
3. Boron does not react directly with hydrogen. Suggest one method to prepare diboranefrom BF3.

4. Give the uses of borax.
(i) Borax is used for the identification of coloured metal ions
(ii) It is used as a flux in metallurgy.
(iii) It act as a preservative.
5. What is catenation? Describe briefly the catenation property of carbon.
Catenation is an ability of an element to form chain of atoms.
The following conditions are necessary for catenation.
(i) The valency of element is greater than or equal to two
(ii) Element should have an ability to bond with itself
(iii)The self-bond must be as strong as its bond with other elements Carbon possesses all the above properties and forms a wide range of compounds with itself and with other elements such as H, O, N, S and halogens.
6. Write a note on Fisher tropsch synthesis.
The reaction of carbon monoxide with hydrogen at pressure of less than 50 atm using metal catalysts at 500 – 700K yields saturated and unsaturated hydrocarbons

8. Give the uses of silicones.
(i) Silicones are used for low temperature lubrication.
(ii) Silicones are used for making water proofing clothes.
(iii)Silicones are used as insulating material in electric motor.
9. AlCl3 behaves like a lewis acid. Substantiate this statement.
AlCl3 is electron deficient. Al forms three bonds with chloride and hence outer shell has six electron. It needs two more electrons to complete its octet. So readily accept a pair of electrons. Hence AlCl3 is a Lewis acid and forms addition compounds with ammonia and phosphate.
10. Describe the structure of diborane.

• In diborane twoBH2 units are linked by two bridged hydrogens. Therefore, it has eight B-H bonds. However, diborane has only 12 valence electrons and are not sufficient to form normal covalent bonds.
• The four terminal B-H bonds (two centre – two electron bond or 2c-2e bond) are normal covalent bonds.
• The remaining four electrons have to be used for the bridged bonds. i.e. two three centred B-H-B bonds utilize two electrons each. Hence, these bonds are three centre –two electron bonds (3c-2e)
• The bridging hydrogen atoms are in a plane. In diborane, the boron is sp3 hybridised.
11. Write a short note on hydroboration.
Diborane adds on alkenes and alkynes in ether solvent at room temperature. This reaction is called hydroboration.
B2H6 + 6RCH = CHR → 2B(RCH – CH2R)3
Diborane                        trialkyl borane
12. Give one example for each of the following:
(i) Icosagens --- Boron family (group 13) --- Eg : aluminium
(ii) Tetragen --- Carbon family (group 14) --- Eg : Silicon
(iii)Pnictogen ---Nitrogen family(group 15) --- Eg : Phosphorous
(iv)Chalcogen --- Oxygen family (group 16) --- Eg : Sulphur
13. Write a note on metallic nature of p-block elements.
The tendency of an element to form a cation by losing electrons is known as electropositive(or) metallic character. This character depends on the ionization energy.Generally on descending a group the ionization energy decreases and hence the metalliccharacter increases. In p-block, the elements present in lower left part are metals.
14. Complete the following reactions: 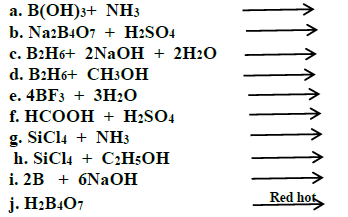 15. How will you identify borate radical?
When boric acid or borate salt is heated with ethyl alcohol in presences of conc.H2SO4 a n ester, trialkylborate is formed. The vapour of this ester burns with a green edged flame and this reaction is used to identify the presence of borate.

16. Write a note on zeolites.
• Zeolites are three dimensional crystalline solids containing aluminium, silicon and oxygen.
• The general formula NaO.(Al2O3).x(SiO2).yH2O .
• The Si and Al atoms are tetrahedrally coordinated with each other through shared oxygen atoms.
17. How will you convert boric acid to boron nitride?

18. A hydride of 2nd period alkali metal (A) on reaction with compound of Boron (B) to give a reducing agent (C). identify A, B, and C.

19. A double salt which contains fourth period alkali metal (A) on heating at 500K gives (B). Aqueous solution of (B) gives white precipitate with BaCl2 and gives a red colour compound with alizarin. Identify A and B.

20. COis a reducing agent.Justify with an example.
Carbon monoxide is a strong reducing agent. It reduce the oxides of the less active metals to theirrespective metals and itself gets oxidised to carbon dioxide in the process.
Eg:

II.Additional Question with Answers:
1. Why boron does not form B3+ ions?
Because of its small size and sum of first three ionization enthalpies is high, boron does not lose all its valence electrons to form B3+ ions.
2. Why the ionization enthalpy from aluminium to thallium is only a marginal difference?
This is due to the presence of inner d and f-electrons which has poor shielding effect compared to s and p-electrons.
3. What isInert pair effect?
Inert pair effect: In heavier post transition metals, the outer s-electrons (ns) have a tendency to remain inert andshow reluctance to take part in the bonding is known as inert pair effect
4. What happen when boron burns with nitrogen and oxygen (or) air?

5. Write any two methods for the preparation of metal borides

6. Write any three uses of boron.
a. Amorphous boron is used as a rocket fuel igniter.
b. Boron is essential for the cell walls of plants.
c. Isotope of boron10B5 is used as a moderator in nuclear reactors.
7.How borax is prepared from colemanite ore?

14. Why Boric acid is a weak monobasic acid ?
Boric acid act as a weak acid by accepting a hydroxide ion of water and releasing a proton into the solution

15. How sodium metaborate and sodium tetraborate are prepared from boric acid
NaOH + H3BO3 → NaBO2+ 2H2O
sodium metaborate
2NaOH + 4H3BO3→ Na2B4O7+ 7H2O
Sodium tetraborate
16. Explain the structure of boric acid
Boric acid has a two dimensional layered structure. It consists of [BO3]3- unit and these are linked to each other by hydrogen bonds
17. Write the uses of boric acid
• Boric acid is used in the manufacture of pottery glases,enamels and pigments
• It is used as an antiseptic and as an eye lotion
• It is also used as a food preservative.
18. What happen when diborane react with water and alkali?

19. What happen when diborane react with metal hydride?

20. How to prepare trimethyl borate?

21. What happen when diborane react with ammonia?
(OR)
How to prepare borazine or borazole or inorganic benzene?

23. Explain McAfee process
Aluminium chloride is obtained by heating a mixture of alumina and coke in acurrent of chlorine