Download PDF
I-TEXT BOOK QUESTION AND ANSWERS
1. Define unit cell.
A basic repeating structural unit of a crystalline solid is called a unit cell.
2. Give any three characteristics of ionic crystals.
• Ionic solids have high melting points.
• They do not conduct electricity in solid state.
• They conduct electricity in molten state (or) when dissolved in water.
• They are hard and brittle.
3. Differentiate crystalline solids and amorphous solids.

5. Explain briefly seven types of unit cell.
There are seven primitive crystal systems. They differ in the arrangement of their crystallographic axes and angles. 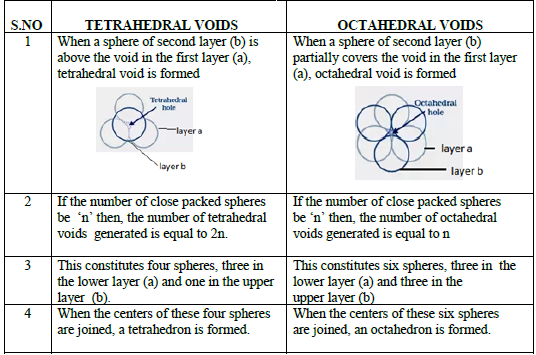 8. What are point defects?
Point defects are the deviations from ideal arrangement that occurs at some points or atoms in a crystalline substance.
9. Explain Schottky defect. 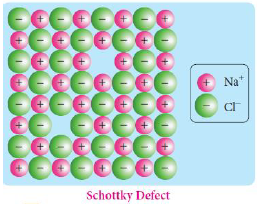 • Schottky defect arises due to the missing of equal number of cations and anions from the crystal lattice .Hence stoichiometry of the crystal is not changed.
• Ionic solids in which the cation and anion are of almost of similar size show schottky defect.
Example: NaCl.
• Presence of large number of schottky defects in a crystal lowers its density.
10. Write short note on metal excess and metal deficiency defect with an example.(or) Write a short note on non-stoichiometric defects.
Metal excess defect: 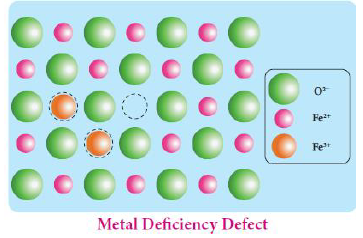 • Metal deficiency defect arises due to the presence of less number of cations than the anions.
• This defect is observed in a crystal in which the cations have variable oxidation state. For example, in FeO crystal, some of the Fe2+ ions are missing from the crystal lattice. To maintain the electrical neutrality, twice the number of other Fe2+ oxidized to Fe3+ ions.
• In such cases, overall number of Fe2+ and Fe3+ ions is less than the O2- ions.
11. Calculate the number of atoms in an fcc unit cell. 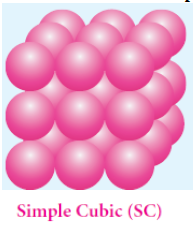 • It occurs in simple cubic arrangement.
• This type of three dimensional packing arrangements can be obtained by repeating the AAAA type two dimensional arrangements in three dimensions.
• Spheres in one layer sitting directly on the top of those in the previous layer so that all layers are identical.
• All spheres of different layers of crystal are perfectly aligned horizontally and also vertically.
• In simple cubic packing , each sphere is in contact with 6 neighbouring spheres- Four in its own layer, one above and one below and hence the coordination number is 6.
ii.  ABABA three dimensional packing: 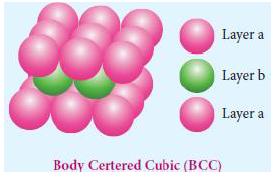 • It occurs in body centeredcubic arrangement.
• In this arrangement, the spheres in the first layer(a) are slightly separated and the second layer (b) is formed by arranging the spheres in the depressions between the spheres in first layer (a) .
• The third layer is a repeat of the first.
• This pattern ABABAB is repeated throughout the crystal.
• In this arrangement, each sphere is in contact with 8 neighbouring spheres- Four in the above layer and four in the below layer and hence the coordination number is 8.
iii.   ABCABC three dimensional packing: 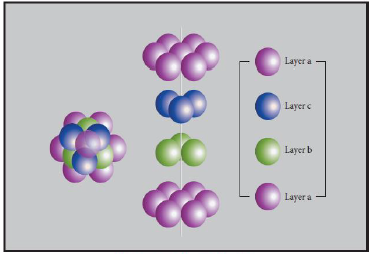 • The first layer (a) is formed by arranging the spheres as in the case of two dimensional ABAB arrangements.
• The second layer (b) is formed by placing the spheres in the depressions of the first layer.
• A tetrahedral void(x) and octahedral voids(y) are formed in the first layer.
• The third layer is placed over the second layer in such a way that all the spheres of the third layer fit in octahedral voids.
• This arrangement of the third layer is different from other two layers (a) and (b) . Hence, the third layer is designated (c).
• If the stacking of layers is continued in abcabc...pattern, then the arrangement is called cubic close packed (ccp) structure.
• In ccp arrangements, the coordination number of each sphere is 12- six neighbouring spheres in its own layer, three spheres in the layer above and three sphere in the layer below.
13. Why ionic crystals are hard and brittle?
• Ionic crystal are hard due to strong electrostatic force of attraction between cations and anions.
• They are brittle because ionic bonds are non directional.
14. Calculate the percentage efficiency of packing in case of body centered cubic crystal.
In bcc, the spheres are touching along the leading diagonal of the cube as shown in the fig. 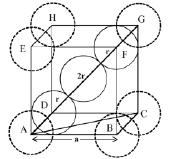 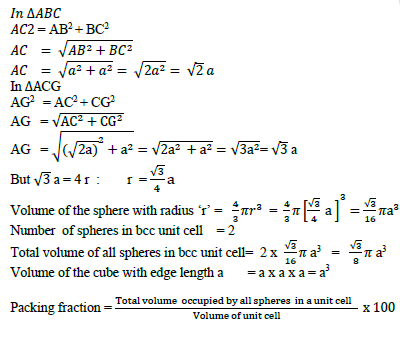 19. Aluminium crystallizes in a cubic close packed structure. Its metallic radius is 125pm.Calculate the edge length of unit cell.
Given: r = 125pm.

23. Atoms X and Y form bcc crystalline structure. Atom X is present at the corners of the cube and Y is at the centre of the cube. What is the formula of the compound? 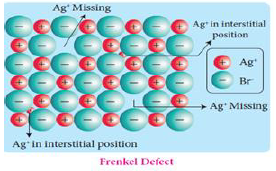 • Frenkel defect arises due to the dislocation of ions from its crystal lattice.
• The ion which is missing from the lattice point occupies an interstitial position.
• This defect occurs when cation and anion differ in size.
• Unlike Schottky defect, this defect does not affect the density of the crystal.Ex: AgBr
II-EVALUATE YOURSELF:
1. An element has a face centered cubic unit cell with a length of 352.4 pm along an edge. The density of the element is 8.9 gcm-3. How many atoms are present in 100 g of an element?
Given: Density =8.9 gcm-3:  a = 352.4 pm = 3.524 x 10 -8cm , Mass = 100g , Z = 4

IV-ADDITIONAL QUESTIONS:
1. How solids are classified?
Solids are classified into two types
(i) Crystalline solids
(ii) Amorphous solids..Ex: glass, rubber
Crystalline solids are further classified depending upon nature of their constitutents.
(a) Ioniccrystals. Ex: NaCl, KCl
(b) Covalent crystals Ex: Diamond, SiO2
(c) Molecular crystals. Ex: Naphthalene, Anthracene, Glucose
(d) Metallic crystals. Ex: Na,Mg,Au,Ag
(e) Atomic solids. Ex: Frozen elements of group 18
2. Explain isotropy and anisotropy ?
• Isotropy means having identical values of physical properties (refractive index, electrical conductance) in all directions. Ex-amorphous solids.
• Anisotropy means having different values of physical properties when measured along different directions. Ex- crystalline solids
3. Give a note on covalent solids ?
• In covalent solids, the constituents (atoms) are bound together in a three dimensional network entirely by covalent bonds
• Examples: Diamond, silicon carbide etc.
• Such covalent network crystals are very hard, and have high melting point.
• They are usually poor thermal and electrical conductors
4. What are molecular crystals? How are they classified?
• In molecular solids, the constituents are neutral molecules.
• They are held together by weak Vanderwaals forces.
• Generally, molecular solids are soft and they do not conduct electricity
• Molecular solids are further classified into three types.
5. Explain metallic solids.
• In metallic solids, the lattice points are occupied by positive metal ions and a cloud of electrons pervades the space.
• They are hard, and have high melting point.
• Metallic solids possess excellent electrical and thermal conductivity. They possess bright lustre.
• Examples: Metals and metal alloys belong to this type of solids, for example Cu, Fe, Zn, Ag ,Au, Cu- Zn etc.
6. Name the parameters that characterize a unit cell
A unit cell is characterised by the three edge lengths or lattice constants a ,b and c and the angle between the edges α, β and γ.
7. What are primitive and non-primitive unit cell?
A unit cell that contains only one lattice point is called a primitive unit cell,
A unit cell that contains additional lattice points, either on a face or within the unit cellis called anon- primitive unit cells.
8. Sketch i.sc ii.bcc iii.fcc&calculate its numberof atoms per unit cell 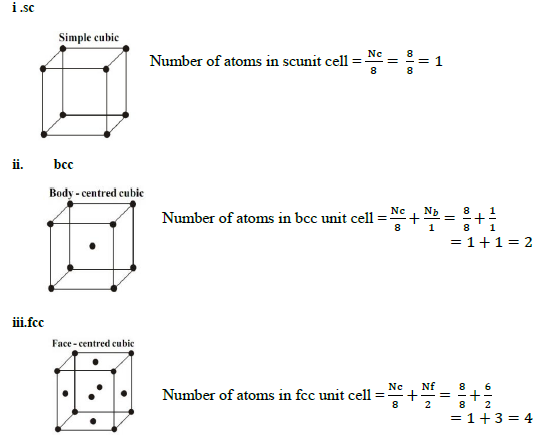 9. How inter planar distance are calculated in unit cell?
The inter planar distance (d) between two successive planes of atoms can be calculated using the following equation form the X-Ray diffraction data
2dsin θ= n λ
The above equation is known as Bragg’s equation, where
λ-wavelength of X-ray used for diffraction. θ-angle of diffraction n – order of refraction
By knowing the values of λ, θ and n we can calculate the value of d.
d = nλ/2dsin θ
10. Explain the relationship between atomic radius and edge length of fcc unit cell and calculate its packing efficiency 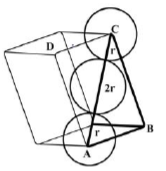 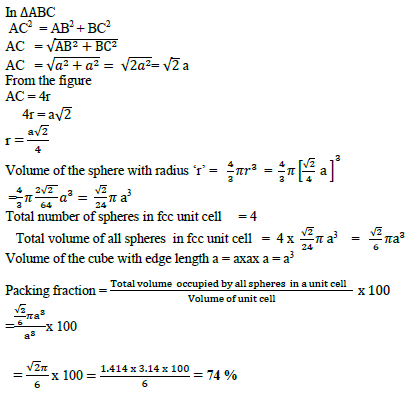 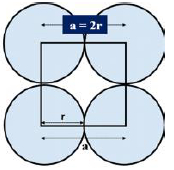 12. Radius ratio of an ionic solid is found to be 0.415. Where the cations are occupied?
Cations occupies the octahedral voids.
{Hint: radius ratio <0.4 – tetrahedral voids
radius ratio >0.4 – octahedral voids}
13. Write the possible octahedral voids and tetrahedral voids exist per atom in a crystal.
Number of tetrahedral voids = 2
Number of octahedral voids = 1
14. How electrical neutrality is maintained in stoichiometric ionic crystals?
In stoichiometric ionic crystals, a vacancy of one ion must always be associated with either by the absence of another oppositely charged ion (or) the presence of same charged ion in the interstitial position so as to maintain the electrical neutrality.
15. Explain how vacancies are introduced in an ionic solid when a cation of higher valence is added as impurity in it. (Impurity defect)
• Due to the presence of impurity, ions in ionic solids causes vacancies in the crystal lattice of the host.
• For example, addition of CdCl2 to silver chloride yields solid solutions where the divalent cation Cd 2+ occupies the position of Ag+.
• This disturbs the electrical neutrality of the crystal.
• In order to maintain the same, proportional number of Ag+ ions leaves the lattice This produces a cation vacancy in the lattice, such kind of crystal defects are called impurity defects.
16. What happens when ZnO is heated?
• ZnO is colourless at room temperature.
• When it is heated, it becomes yellow in colour.
• On heating, it loses oxygen and thereby forming free Zn2+ ions.
• The excess Zn2+ ions move to interstitial sites and the electrons also occupy the interstitial positions.
17. Why Frenkel defect is not found in alkali halides?
Larger size of alkali metal ions dose not allow them to fit in interstitial sites.
18. Schottky defect lowers the density of the ionic solid. Why?
The total number of ions in a crystal with this defect is less than the theoretical value of ions. Thus the density of the solid crystal is less than expected.
19. How F centers are formed when NaCl crystals are heated in the presence of sodium vapour, excess of Na+ ions are observed. Justify your answer.
• When NaCl crystals are heated in the presence of sodium vapour, Na+ ions are formed and are deposited on the surface of the crystal.
• Chloride ions (Cl-) diffuse to the surface from the lattice point and combines with Na+
• The electron lost by the sodium vapour diffuse into the crystal lattice and occupies the vacancy created by the Cl- ions.
• Such anionic vacancies which are occupied by unpaired electrons are called F centers.
• Hence, the formula of NaCl which contains excess Na+ ions can be written asNa1+ x Cl
20. Give the relationship between atomic radius (r), inter atomic distance (d) and packing efficiency of the unit cell of a cubic crystal.