6. Calculate the ratio of 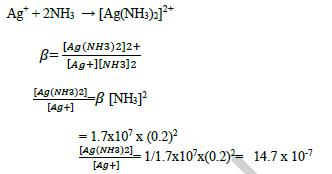 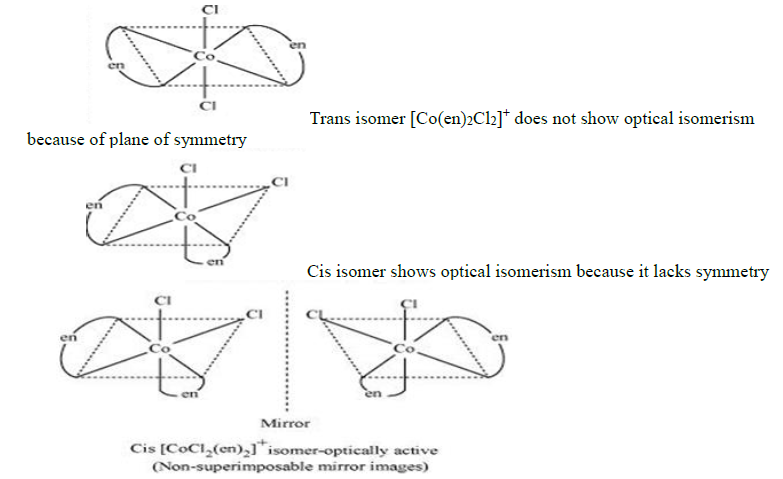 11. Give an example for complex of the type. [Ma2b2c2] where a, b, c are monodentate ligands and give the possible isomers.
[PdI2(ONO)2(H2O)2] Diaquadiiododinitrito-K -O Palladium (IV)
[PdI2(NO2)(H2O)2] Diaquadiiododinitrito-K -N palladium (IV)
They will exhibit linkage isomerism
12. Give one test to differentiate [Co(NH3)5Cl]SO4 and [Co(NH3)5 SO4]Cl.

13. In an octahedral crystal field, draw the figure to show splitting of d orbitals.
The energy of the orbitals dx2-y2and dz2(represented as eg orbitals) will increase by

while that of the other three orbitalsdxy, dyzanddzx( represented as t2g orbitals ) decrease by

represents the crystal field splitting energy in the octahedral field. 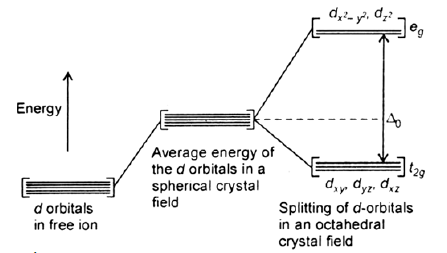 14. What is linkage isomerism? Explain with an example.
This type of isomers arises when an ambidentate ligand is bonded to the central metal atom/ion through either of its two different donor atoms.(-NO2/-ONO-)
Example :

15. Write briefly about the applications of coordination compounds in volumetric analysis.
Complexometric Titrations:
An example of this is the use of EDTA in the volumetric determination of a wide variety of metal ions in solution, e.g. Zn2+, Pb2+,Ca2+,Co2+,Ni2+,Cu2+, etc. By careful adjustment of the pH and using suitable indicators, mixtures of metals can be analysed, e.g. Bi3+ in the presence of Pb2+. Alternatively, EDTA may be used as a masking agent to remove a metal ion which would interfere with the analysis of a second metal ion present.
16. Classify the following ligand based on the number of donor atoms.
a) NH3
b) en
c) ox2-
d) triaminotriethylamine
e) pyridine

17. Give the difference between double salts and coordination compounds.

18. Write the postulates of Werner’s theory.
1. Most of the elements exhibit, two types of valence.
• Primary valence
• Secondary valence
2. Primary valence is referred as the oxidation state of the metal atom and the Secondary valence as the coordination number.
3. The primary valence of a metal ion is positive in most of the cases and zero in certain cases. They are always satisfied by negative ions.
4. The secondary valence is satisfied by negative ions, neutral molecules, positive ions or the combination of these.
5. According to Werner, there are two spheres of attraction around a metal atom/ion in a complex.
• The inner sphere is known as coordination sphere.
• The outer sphere is called ionisation sphere.
6. The primary valences - non-directional
the secondary valences - directional.
7. The geometry of the complex is determined by the spacial arrangement of the groups which satisfy the secondary valence.
Six - octahedral geometry.
Four -either tetrahedral or square planar geometry. 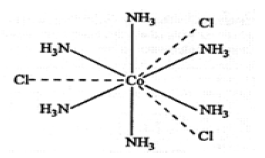 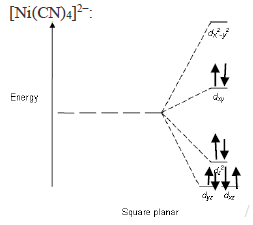 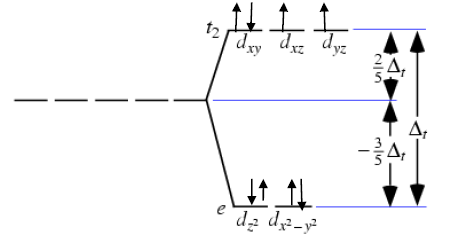 The d orbitals here fill with 8 electrons, but instead, high spin. So, the dz2 and dx2−y2 fill with one electron each, then the dxy, dxz, and dyz with one electron each, and then pairing occurs only after that, filling the dz2, dx2−y2, and dxy completely. This leaves two unpaired electrons in the t2 orbitals, and thus this complex is paramagnetic with two unpaired electrons, as expected.
20. Why tetrahedral complexes do not exhibit geometrical isomerism.
• All the four ligands are adjacent or equidistant to one another in tetrahedral complex.
• As the relative positions of donor atoms of ligands attached to the central atom are same with respect to each other.
21. Explain optical isomerism in coordination compounds with an example.
Optical Isomerism
• Coordination compounds which possess chirality exhibit optical isomerism.
• The pair of two optically active isomers which are mirror images of each other are called enantiomers.
• Their solutions rotate the plane of the plane polarised light either clockwise or anticlockwise and the corresponding isomers are called 'd' (dextro rotatory) and 'l' (levo rotatory) forms respectively.
• The octahedral complexes of type [M(xx)3] n±, [M(xx)2AB]n± and [M(xx)2B2]n± exhibit optical isomerism.
Example:

22. What are hydrate isomers? Explain with an example.
The exchange water molecules in the crystal lattice with a ligand in the coordination entity will give different isomers. These type of isomers are called hydrate isomers.
Example :
CrCl3.6H2O has three hydrate isomers as shown below.

negis number of electrons in eg orbitals
npis number of electron pairs in the ligand field
n'pis the number of electron pairs in the isotropic field (barycentre).
25. Discuss briefly the nature of bonding in metal carbonyls.
In metal carbonyls, the bond between metal atom and the carbonyl ligand consists of two components.
• An electron pair donation from the carbon atom of carbonyl ligand into a vacant d-orbital of central metal atom.
σ
• This electron pair donation forms M←CO sigma bond.
This sigma bond formation increases the electron density in metal d orbitals and makes the metal electron rich.
In order to compensate for this increased electron density, a filled metal d-orbital interacts with the empty π* orbital on the carbonyl ligand and transfers the added electron density back to the ligand. This second component is called π-back bonding .
Thus in metal carbonyls, electron density moves from ligand to metal through sigma bonding and from metal to ligand through pi bonding, this synergic effect accounts for strong
M ←CObond in metal carbonyls.
26. What is the coordination entity formed when excess of liquid ammonia is added to an aqueous solution copper sulphate?
When excess of liquid ammonia is added to an aqueous solution of copper sulphate it gives tetraammine copper (II) sulphate.
CuSO4 + 4NH3→ [Cu(NH3)4]SO4
So, the coordination entity is : [Cu(NH3)4]2+
27. On the basis of VB theory explain the nature of bonding in [Co(C2O4)3]3- 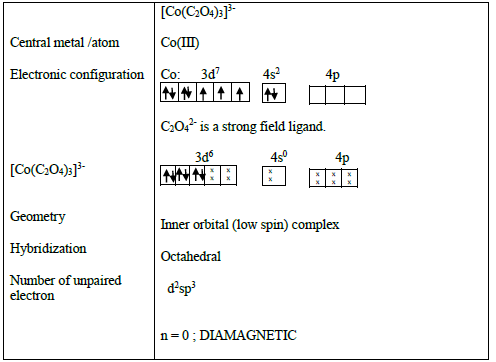 28. What are the limitations of VB theory?
1. It does not explain the colour of the complex
2. It considers only the spin only magnetic moments and does not consider the other components of magnetic moments.
3. It does not provide a quantitative explanation as to why certain complexes are inner orbital complexes and the others are outer orbital complexes for the same metal. For example, [Fe(CN)6]4- is diamagnetic (low spin) whereas [FeF6]4- is paramagnetic (high spin).
29. Write the oxidation state, coordination number , nature of ligand, magnetic property and electronic configuration in octahedral crystal field for the complex K4[Mn(CN)6].

6. Three compounds A,B and C have the molecular formulaCrCl3.6H2o they are kept in a container with a dehydrating agent and they lost water and attaining constant weight as shown below.

8. Draw all possible isomers of a complex Ca[Co(NH3)Cl(ox)2] 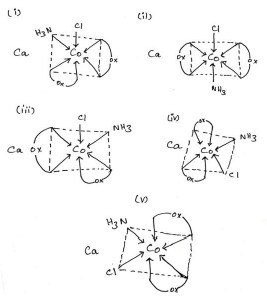 9. The spin only magnetic moment of tetrachloridomanganate(II) ion is 5.9 BM. On the basis of VBT predict the type of hybridization and geometry of the compound
Given complex [MnCl4]2-
When magnetic moment is 5.9BM it means it has 5 unpaired electron i.e., n=5

Chlorido is a weak ligand therefore no pairing takes place .

10. Predict the number of unpaired electrons in [CoCl4]2- ion on the basis of VBT.

Number of unpaired electron, n=3
11. A metal complex having composition Co(en)2Cl2Br has been isolated in two forms A and B. (B) reacted with silver nitrate to give a white precipitate readily soluble in ammonium hydroxide. Where as A gives a pale yellow precipitate. Write the formula of A and B. State the hybridization of Co in each and calculate their spin only magnetic moment.

13. Draw energy level diagram and indicate the number of electron in each level for the complex [Cu(H2O)6]2+ .
Whether the complex is paramagnetic or diamagnetic?
[Cu(H2O)6]2+ ion is a stretched octahedron. The electronic configuration of copper(II) ion is [Ar} 3d9. When the complex ion formed by Cu2+ has an octahedral structure, the d orbitals will split in to two different orbitals t2g and eg. The electronic configuration is (t2g)6 (eg)3 , the 3 electrons in eglevel can be arranged in two different ways t2g6 eg3 ( dz2)2 (dx2-y2)1 or t2g6 eg3 ( dz2)1 (dx2-y2)2 . To break the degeneracy there is a distortion of the octahedral splitting
The presence of one unpaired electron in the eg level makes [Cu(H2O)6]2+ as paramagnetic
14. For the [CoF6]3- ion in the mean pairing is found to be 21000 cm-1. The magnitude of Δₒ is 13000 cm-1. Calculate the crystal field stabilization energy for this complex ion corresponding to low spin and high spin states.
Given mean pairing energy 21000 cm-1 and Octahedral splitting energy is 13000 cm-1
Forthe [CoF6]3 electronic configuration Co3+ is 3d6

EXTRA QUESTIONS
1. Write the coordination number and oxidation state of platinum in the complex [Pt(en)2Cl2]
Coordination number and oxidation state of Pt in the complex [Pt(en)2Cl2] are 6 and +2 because en is a bidentate and neutral ligand
2. What type of isomerism is exhibited by the complex [Co(NH3)5Cl]SO4 and [Co(NH3)6][Cr(CN)6] ?
Ionization isomerism and coordination isomerism respectively.
3.Write the postulates of Valence bond theory.
1. The ligand → metal bond in a coordination complex is covalent in nature. It is formed by sharing of electrons (provided by the ligands) between the central metal atom and the ligand.
2. Each ligand should have at least one filled orbital containing a lone pair of electrons.
3. In order to accommodate the electron pairs donated by the ligands, the central metal ion present in a complex provides required number (coordination number) of vacant orbitals.
4. These vacant orbitals of central metal atom undergo hybridisation, the process of mixing of atomic orbitals of comparable energy to form equal number of new orbitals called hybridised orbitals with same energy.
5. The vacant hybridised orbitals of the central metal ion, linearly overlap with filled orbitals of the ligands to form coordinate covalent sigma bonds between the metal and the ligand.
6. The hybridised orbitals are directional and their orientation in space gives a definite geometry to the complex ion.