Read and download PDF of CBSE Class 10 Science Sample Paper Solved 2021 Term 1 Set A designed as per the latest curriculum and examination pattern for Class 10 issued by CBSE, NCERT and KVS. The latest Class 10 Science Sample Papers have been provided with solutions so that the students can solve these practice papers and then compare their answers. This will help them to identify mistakes and improvement areas in Science Standard 10 which they need to study more to get better marks in Grade 10 exams. After solving these guess papers also refer to solved Class 10 Science Question Papers available on our website to build strong understanding of the subject

Section A
Section – A consists of 24 questions. Attempt any 20 questions from this section.
The first attempted 20 questions would be evaluated.
Question 1. Translate the following statement into the chemical equation and choose the correct option “Hydrogen gas combines with nitrogen to form ammonia.”
(a) 3H2(g) + N2(g) →2NH3(g)
(b) H2(g) + N2(g) NH2(g) +
(c) 2H(g) + N2(g) 2NH3
(d) None of these
Answer :  A
Question 2. In an experiment to study the properties of acetic acid, a student takes about 2 ml of acetic acid in a dry test tube. He adds about 2 ml of water to it and shakes the test tube well. What will he observe ?
(a) The acetic acid dissolves readily in water.
(b) The solution becomes light orange.
(c) Water floats over the surface of acetic acid.
(d) Acetic acid floats over the surface of water.
Answer :  A
Question 3. When a metal X is treated with cold water, it gives a base Y with molecular formula XOH (Molecular mass = 40) and liberates a gas Z which easily catches fire. Here X, Y and Z are 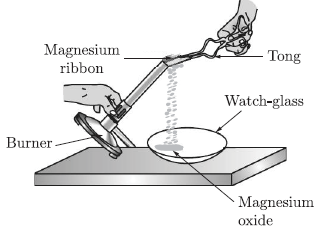 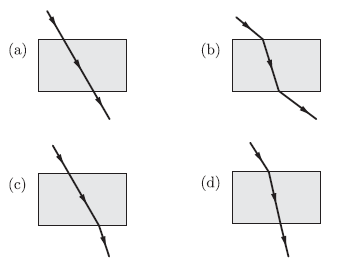 Answer :  B
Question 40. Which of the following correctly represents graphical relation between angle of incidence (i) and angle of reflection (r)? 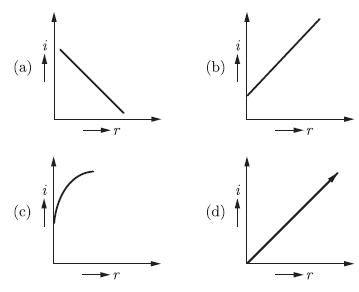 Answer :  D
Question 41. Which process is shown by the following picture? 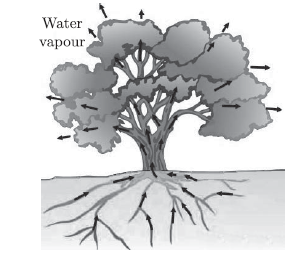 (a) Movement of food during photosynthesis in a tree
(b) Movement of water during transpiration in a tree
(c) Movement of minerals during in a tree
(d) Movement of carbon dioxide during in a tree
Answer :  B
Question 42. An artificial kidney is a device to remove nitrogenous waste products from the blood through-
(a) Diaphragm (b) Dialysis
(c) ECG (d) Electrolysis
Answer :  B
Question 43. In which of the following, the image of an object placed at infinity will be highly diminished and point sized?
(a) Concave mirror only
(b) Convex mirror only
(c) Convex lens only
(d) Concave mirror, convex mirror, concave lens and convex lens
Answer :  D
Question 44. If the central portion of a convex lens is wrapped in black paper as shown in the figure

(a) No image will be formed by the remaining portion of the lens
(b) The full image will be formed but it will be less bright
(c) The central portion of the image will be missing
(d) There will be two images each produced by one of the exposed portions of the lens
Answer :  B
Question 45. An object is kept in front of a concave mirror of focal length 20 cm. The image is three times the size of the object. The possible distances of the object from the mirror is-
(a) −80/3 (b) −40/3
(c) −50/3 (d) −10/3
Answer :  A
Question 46. A convex lens of focal length 25 cm and a concave lens of focal length 10 cm are placed in close contact with each other. The power of this combination is-
(a) 2 D (b) 6 D
(c) −6 D (d) 9 D
Answer :  C
Question 47. A convex lens of focal length 20 cm is placed in contact with a concave lens of focal length 10 cm. The power of the combination is-
(a) 10 dioptre (b) −10 dioptre
(c) −5 dioptre (d) 5 dioptre
Answer :  C
Question 48. Which of the following metals gives hydrogen with dil. HNO3?
(a) Al (b) Mg
(c) Az → (d) Sn
Answer :  B
Section C
Section- C consists of three Cases followed by questions. There are a total of 12 questions in this section. Attempt any 10 questions from this section.
The first attempted 10 questions would be evaluated.
Case Based Questions: (49-52)
The pH of a solution is a measure of its hydrogen ion (H+) concentration. It is measured generally using pH scale. The values on pH scale ranges from 0 to 14.
A pH of 1 is very acidic and corresponds to a high concentration of H+ ions. A pH of 14 is very basic and corresponds to a low concentration of H+ ions.
The pH of a neutral solution is 7. The table given below shows the pH and H+ ion concentration of some common aqueous solutions. The leftmost column shows the number of moles of H+ ions in 1 mole of liquid.
The pH and Hydrogen ion (H+) Concentration of Some Solutions 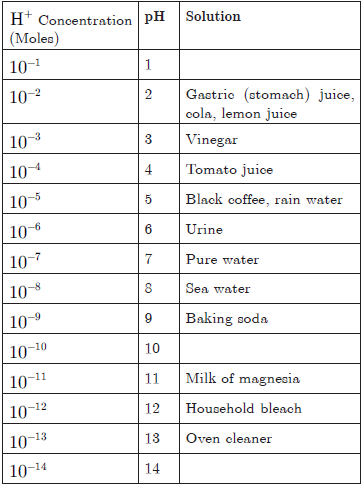 Question 49. How is the hydrogen ion concentration and pH related to each other?
(a) They are inversely proportional
(b) They are directly proportional
(c) They are equal
(d) They have no relation
Answer :  A
Question 50. Among the given solutions in the above table, the most basic in nature is
(a) pure water (b) oven cleaner
(c) household bleach (d) gastric juice
Answer :  B
Question 51. The acid having highest hydrogen ion concentration is one with
(a) pH = 2.5 (b) pH = 1.8
(c) pH = 7 (d) pH = 10
Answer :  B
Question 52. Which of the following acids is used in making of vinegar?
(a) Nitric acid
(b) Sulphuric acid
(c) Formic acid
(d) Acetic acid
Answer :  D
Case Based Questions: (53-56)
The excretory system is a passive biological system that removes excess, unnecessary materials from the body fluids of an organism, so as to help maintain internal chemical homeostasis and prevent damage to the body. 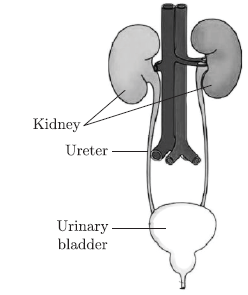 Question 53. Which among the following is the storage organ for urine?
(a) Urter (b) Kidney
(c) Urinary bladder (d) Urethra
Answer :  C
Question 54. The main function of ureter is
(a) contain urine till is released out
(b) carry urine from kidney to urinary bladder
(c) guard the urethra
(d) passage through which urine is excreted out of the body
Answer :  B
Question 55. The diagram shows a kidney and its associated vessels. 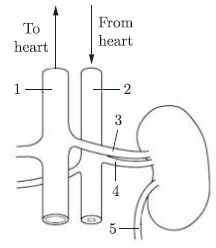 Which structure have the most and least urea concentration?

Answer :  D
Question 56. If Henle’s loop were absent from mammalian nephron, which one of the following to be expected?
(a) There will be no urine formation
(b) There will be hardly any change in the quality and quantity of urine formed
(c) The urine will be more concentrated
(d) The urine will be more dilute
Answer :  D
Case Based Questions: (57-60)
Refer to the path of rays of light through a glass prism. Now answer the following questions. 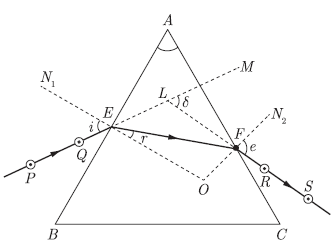 Download Free printable worksheets for Class 10 Science designed by expert teachers for all important chapters and topics and is available for free download in...
More..

Download free Printable Worksheets, test papers with questions and answers for Class 10 Science for all important topics and chapters as per CBSE, NCERT, KVS...
More..