Class 12 Biology students should refer to the following concepts and notes for Evolution in standard 12. These exam notes for Grade 12 Biology will be very useful for upcoming class tests and examinations and help you to score good marks

Evolution: Change in allele frequencies over time leading to diversity of organisms on earth. It is the genetic change in a population or species over generations (Genes mutate, individuals are selected, and populations evolve).

From comparative anatomy: Comparison of body structures amongst different species comes under comparative anatomy. Certain anatomical similarities among species bear witness to evolutionary history. eg. the same skeletal elements make up the forelimbs of man, horse, whale and bat, but each of them perform different functions. However, structural similarities in all mammals descended from a common ancestory with prototype forelimbs are common suggesting homology. Comparative anatomy confirms that evolution is a remodeling process. Ancestral structures that originally functioned in one capacity become modified as they take on new functions-‗descent with modification’. 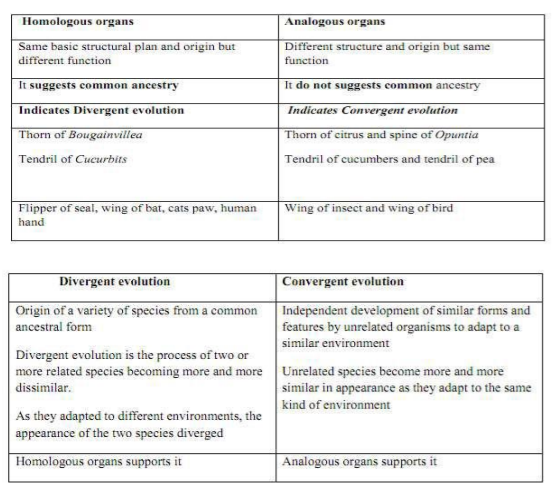 Adaptive radiation or mega evolution: Diversification, over evolutionary time, of a species or group of species into several different species or subspecies that are typically adapted to different ecological Group of organisms diversify greatly and take on new ecological roles. (for example, Darwin's finches in the Galapagos Island and Marsupials in Australia).

Darwin‘s finches: Divergent Evolution: Evolutionary pattern in which two species gradually become increasingly different. This type of evolution often occurs when closely related species diversify to new habitats. On a large scale, divergent evolution is responsible for the creation of the current diversity of life on earth from the first living cells. On a smaller scale, it is responsible for the evolution of humans and apes from a common primate ancestor. Adaptive radiation is one example of divergent evolution. 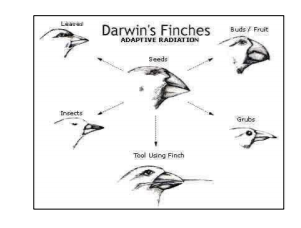 In the early 1800s French naturalist Jean Baptiste Lamarck suggested that evolution is a process of adaptation, the refinement of characteristics that equip organisms to perform successfully in their environment. However, unfortunately we remember Lamarck for his erroneous view of how adaptation evolved (the inheritance of acquired characters).

Branching descent and natural selection are the two key concepts of Darwinian Theory of evolution. According to him all the species inhabiting earth today descended from ancestral species (descent with modification) and natural selection is the mechanism for such descent with modification. Natural Selection states that a population of organisms can change over the generations if individuals having certain heritable traits leave more offspring than other individuals, resulting in a change in the populations genetic composition over time.

within a population. Natural selection may be directional: it may favor, for example, smaller individuals and will, if the character is inherited, produce a decrease in average body size. Directional selection

could, of course, also produce an evolutionary increase in body size if larger individuals had higher fitness.