Class 12 Biology students should refer to the following concepts and notes for Reproduction In Organisms in standard 12. These exam notes for Grade 12 Biology will be very useful for upcoming class tests and examinations and help you to score good marks

•  All organisms show remarkable similarity. Vast difference in their reproductive structure. Similar pattern or phases in their life cycles

• The main events of sexual cycle are:
i. Prefertilisation events:

• Sexuality in organisms : In plants Bisexual term is used for Homothallic and Monoecious plants
Both male and female reproductive structures in same plant eg. Higher plants, cucurbits and coconut. 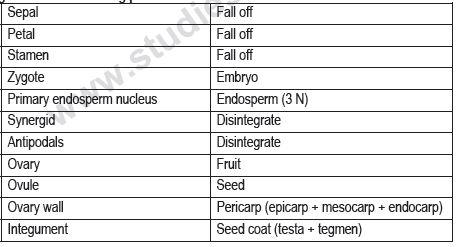 • Parthenogenesis: Female gamete develops into new organism.
• Seedless fruits formed by parthenogenesis
• Clone: A group of individuals of the same species that are morphologically and genetically similar to each other & their parents
• Turion :Fleshy overwintering buds in aqatic plants help in perrenation Eg potomegaton, utricularia
• Bulbil :Fleshy buds that produce new plant EgAgave and Oxalis

Question. Why do we refer to offspring formed by asexual method of reproduction as clones?
Answer : The reproduction is called asexual, when offspring is produced by a single parent with or without the involvement of gamete formation.
As a result, the offspring that are produced are not only similar to one another, but are also exact copies of their parent. Such a group of morphologically and genetically similar individuals is called clone.

Question. Rearrange the following events of sexual reproduction in the sequence in which they occur in a flowering plant embryogenesis, fertilisation, gametogenesis, pollination.
Answer : The correct sequence of events of sexual reproduction in a flowering plant are as follows gametogenesis, pollination, fertilisation, embryogenesis.

Question. Is there a relationship between the size of an organism and its life span?
Give two examples in support of your answer.
Answer : There is no relationship between the size and life span of an organism. e.g.,
(i) The mango tree has a shorter life span as compared to a peepal tree though both are of the same size.
(ii) The size of crow and parrot is almost same but the life span is 15 years and 150 years respectively.

Question. In the figure given below, mark the ovule and pericarp.
Answer : In flowering plants, the zygote is formed inside the ovule. After fertilisation the sepals, petals and stamens of the flower wither and fall off. The pistil however, remains attached to
the plant.
The zygote develops into the embryo and the ovules develop into the seed. The ovary develops into the fruit which develops a thick wall called pericarp that is protective in function.

Question. Why do gametes produced in large numbers in organisms exhibit external fertilisation?
In most aquatic organisms, such as a majority of algae and fishes as well as amphibians, syngamy (fusion of gametes in sexual reproduction) occurs in the external medium (water) , i.e., outside the body of the organism. This type of genetic fusion is called external fertilisation.
Answer : Organisms that take part in such process produce large number of gametes because (i) In external fertilisation, there is a great chance that the sperm and the eggs released by the organisms can be affected by factors present in the environment like dessication, predators, etc. So, to make up for the high fatality rate of the gametes, the organism produces a lot of gametes.
(ii) Producing large number of gametes increase the chance for at least some eggs and sperms to meet in the environment ensuring that atleast a stable number of offspring
are able to survive and carry on.

Question. Which of the following are monoecious and dioecious organisms?
(a) Earthworm ............. (b) Chara ..........
(c) Marchantia ........... (d) Cockroach ...........
Answer : (a) Earthworm- Monoecious animal
(b) Chara- Monoecious plant
(c) Marchantia-Dioecious plant
(d) Cockroach- Dioecious animal
Note In several fungi and plants, terms such as homothallic and monoecious are used to denote the bisexual condition (male and female reproductive structures in the same plant) and heterothallic and dioecious are the terms used to describe unisexual condition (male and female reproductive structures on different plants).
But in animals, individuals are either male or female (unisexual) or possess both the reproductive organs (bisexual).

Question. In haploid organisms that undergo sexual reproduction, name the stage in the life cycle when meiosis occurs. Give reasons for your answer.
Answer : Meiosis can take place only in a diploid stage (post-zygotic stage) because the zygote is the only diploid cell in the life cycle of such organisms. This meiosis an case of haploid organisms will occur of the fertilisation.

Question. The number of taxa exhibiting asexual reproduction is drastically reduced in higher plants (angiosperms) and higher animals (vertebrates) as compared with lower groups of plants and animals. Analyse the possible reasons for this situation.
Answer : Higher plants (angiosperms) and higher animals (vertebrates) have a more complex structural organisation as compared to the lower groups of plants and animals. They have evolved very efficient mechanism of sexual reproduction. These groups have resorted to reproduction by the sexual method for the following reasons (i) To ensure healthy progeny (ii) To produce genetically varied offsprings that adapt to changes in environment and surviveal in all climatic conditions. (iii) It ensures the genetic recombination that results in variation which gives rise to evolution.

Question. Honeybees produce their young ones only by sexual reproduction. Inspite of this, in a colony of bees we find both haploid and diploid individuals. Name the haploid and diploid individuals in the colony and analyse the reasons behind their formation.
Answer : (i) Sterile diploid females as workers (ii) One fertile diploid female as queen (iii) Fertile haploid males as drones. In case of honeybees, both haploid and diploid individuals formad as a result of incomplete (cyclic) parthenogenesis, i.e., both sexual reproduction and parthenogenesis. Fertilised eggs (zygote) give rise to queen and workers (both are females) by the process of sexual reproduction and unfertilised eggs (ova) develop into drones (males) by the process of parthenogenesis.

Question. Suggest a possible explanation why the seeds in a pea pod are arranged in a row, whereas those in tomato are scattered in the juicy pulp.
Answer : In pea, fruit is legume. The pea pod is developed from monocarpellary, unilocular and half superior ovary. At maturity, the fruit splits along the dorsal and ventral sutures and discharge its seeds. In gynoecium with single carpel, ovules are always attached to the ventral suture. This results in the fruit with marginal placentation. Thus, the seeds are arranged in a row in legume (pea) pod. (Image 21) In tomato, the fruit is berry. It is fleshy fruit develop from superior or inferior ovary. In this, the margins of the carpels grow inward to the centre of the ovary dividing the central chamber into compartments called locules. So that, the ovules are arranged radially on the axis, attached by placenta that is called axial placentation. That’s the reason the seeds are embedded in the juicy pulp.

Question. Draw the sketches of a zoospore and a conidium. Mention two dissimilarities between them and atleast one feature common to both structures.
Answer : The feature common to zoospores and conidia is that both of these are the asexual reproductive structures, which facilitate the process of reproduction in asexually reproducing organisms.

Question. Do all the gametes formed from a parent organism have the same genetic composition (identical DNA copies of the parental genome)? Analyse the situation with the background of gametogenesis and provide or give suitable explanation.
Answer : No, all the gametes formed from a parent organism do not have the same genetic composition.
It can be better understand with the help of the explanation given below Sexual reproduction in organisms generally involves the fusion of gametes from two different individuals. These gametes form by the process of gametogenesis. In the heterogametic species, gametes are of two types namely male and female. Gametes are haploid though the parent body from which they arise may be either haploid or diploid.
(a) A haploid parent like Monera, fungi, algae and bryophytes produce gametes by mitotic division. The number of chromosomes, i.e., the genetic composition remain same after such type of division.
(b) The diploid parent like pteridophytes, gymnosperms, angiosperms and most of the animals including human beings produces gametes by meiosis. In such organisms (diploid), specialised cells called meiocytes (gamete mother cell) undergo meiosis. At the end of meiosis only one set of chromosomes gets incorporated into each gamete. It means the gametes formed contain a haploid number of chromosomes in contrast to the number of chromosomes in mother cells.