Class 12 Biology students should refer to the following concepts and notes for Biodiversity And Conservation in standard 12. These exam notes for Grade 12 Biology will be very useful for upcoming class tests and examinations and help you to score good marks

Biodiversity is defined as the totality of genes, species and ecosystems of a given region, It is the variety and variability of life form (all animals, plants and microbes on earth) and the ecological complexes in which they occur.The term was first coined by Walter G. Rosen(1985),however the term was popularized by the American sociobiologist Edward Wilson(1988)

Arrhenius (1921) concluded that the number of species increases continuously less as the area increases. This phenomenon is known as the species/area relationship (SAR). This is reflected in the quantitative formula S = cAz, in which S represents the number of species and A the size of the area. The constant c is an empirically determined multiplier that varies among taxa and areasThe exponent z varies according to the topographic diversity, the isolation of the area and the mobility of the taxon. It is usually higher* for islands (around 0.3) than for the mainland (commonly assumed less that 0.2). (* the lower z, the less space isneededto capture a greater number of species.) 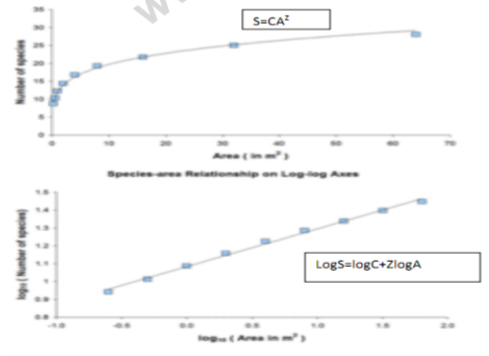 Loss of biodiversity in a region may lead to

2)lowered resistance to environmental changes such as drought.

Reasons for conservation can be grouped into three categories:

c)ethical-we need to realise that every species has an intrinsic value and we need to pass on our biological legacy to future generations.

How to conserve biodiversity:

In-situConservation– Threatened /endangered plants and animals are provided with urgent measures to save from extinction within their natural habitat( in wildlife sanctuaries, national parks & biosphere reserves, sacred groves /lakes-i.e. in protected areas)

Biodiversity hotspots – regions with very high levels of species richness and endemism. Norman Myers developed the concept of hotspots in 1998 to designate priority areas for insitu conservation. They are the most threatened reservoir of biodiversity on earth. In India 2 hotspots are there, eg.Western ghats, and the Eastern Himalayas.

Ex-situ Conservation –Threatened animals& plants are taken out from their natural habitat& placed in a setting where they can be protected and given care as in botanical gardens, zoological gardens, seed/pollen/gene banks etc.

The three main goals of CBD are

2)Sustainable use of components and

3)Fair and equitable sharing of benefits

Taking cognizance of the provisions of the CBD,India has enacted an umbrella legislation called the Biological Diversity Act,2002 and also notified the Biological Diversity Rulkes,2004.Its primary aim is to endorse the main goals of CBD suiting to India’s national needs and circumstances. India will host the 11th Conference of Parties(COP) (known as RIO+20)in October2012. Drivers of biodiversity loss

The main threats to biodiversity are one or more of the following developments:
•Human population growth- means growing demands for space and food.

•Extension of road, rail and electricity networks - fragments habitats and scares away some species.

•Overexploitation - we consume too much of a species or goods that ecosystems provide.
includes excessive hunting, collecting and trade in species and parts of species.

•Pollution- affects the health of animals and plants as much as human health.
Environmental disasters such as oil spills have devastating consequences for birds and the marine fauna and flora.

•Climate change – global rise in temperature between 1.4° and 5.8° Celsius and the sea level by between 9 and 88 cm. Many species will not be able to adapt or move to other regions in next century.

•Invasive alien species - species that enter an ecosystem where they don't occur naturally and then thrive and overwhelm endemic species.
•The tasty Nile perch was introduced to Lake Victoria in Africa in 1954 and caused the extinction of more than 200 endemic fish

Endangered species a species that is in danger of extinction throughout all or a significant portion of its range.
Ex situ conservation- removal of germplasm resources (seed, pollen, sperm, individual organisms), from their original habitat or natural environment. Keeping components of biodiversity alive outside of their original habitat or natural environment.
Extinction-termination of a species caused by the failure to reproduce and the death of all remaining members of the species; the natural failure to adapt to environmental change.
Fauna-All of the animals found in a given area.
Flora-All of the plants found in a given area.
Gene bank- A facility established for the ex situ conservation of individuals (seeds), tissues, or reproductive cells of plants or animals.
Genetic diversity-The variety of genes within a particular populaton, species, variety, or breed.
Hotspot-An area on earth with an unusual concentration of species, many of which are endemic to the area, and which is under serious threat by people.
Red List-The IUCN Red List of Threatened Species provides taxonomic, conservation status and distribution information on taxa that have been globally evaluated.
are Near Threatened).
Species diversity-The number and variety of species found in a given area in a region.

Table 1. Comparison Between the Number of Species in India and the World. 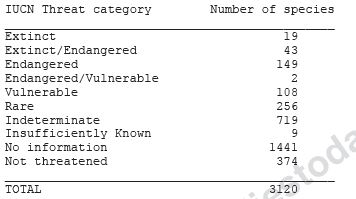 Q. Define Biodiversity.
Ans-totality of genes, species and ecosystems of a given region

Q.What is ecosystem diversity?
Ans.-No. of habitats or ecosystem in a given region of the biosphere.

Q.Can you mention the estimated number of species so far identified on earth?
Ans 1.7 to1.8 million

Q. What is meant by the term ‘endemism’?
Ans-native

Q.What are hot spots? Name two factors for declaring a hot spot. What are the hot spots found in India?
Ans- Eastern Himalaya and Western Ghat

• BIODIVERSITY :- It is the term used to describe the combine diversity at all the levels of biological organization.

•ECOLOGICAL DIVERSITY :- The diversity at the ecosystem level .

•ENDEMISM :- It is the condition when species confined to that region and not found anywhere else.

•GENETIC DIVERSITY :- The High diversity shown by a single species at the genetic level(distributional level .)

•SPECIES AREA RELATIONSHIPS :- The relation between species richness and area. 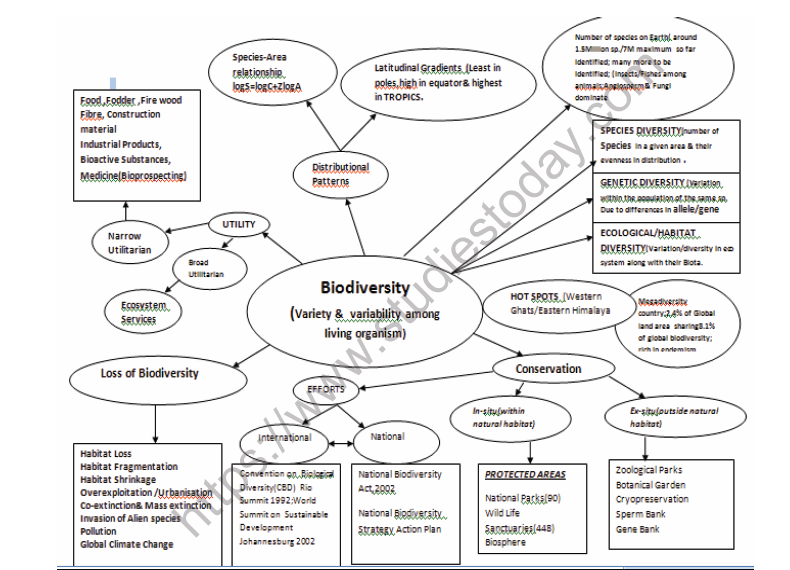