Class 12 Biology students should refer to the following concepts and notes for Biotechnology Principles And Processes in standard 12. These exam notes for Grade 12 Biology will be very useful for upcoming class tests and examinations and help you to score good marks

Biotechnology is a broad area of science involving multiple disciplines designed to use living organisms or their products to perform valuable industrial or manufacturing processes or applications pertaining to human benefit.

An organism's genome contains virtually all the information necessary for its growth and development .rDNA technology creates a recombined DNA with genome of two different cells or organisms.

1. The required gene is cut from a DNA molecule using a restriction enzyme.

2. A bacterial plasmid is isolated and cut with the same restriction enzyme. This ensures cut ends are complementary (same base sequence) to the ends of the required gene.

3. The required gene is joined to the plasmid using the enzyme DNA ligase in a process called ligation.

4. The resulting recombinant plasmid is returned to the bacterial cell.

5. The bacteria reproduce and the required gene is cloned.. 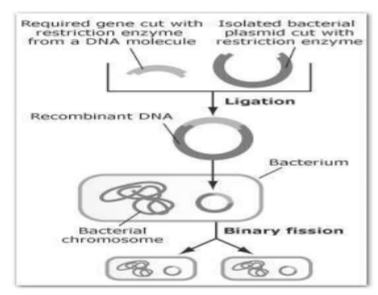 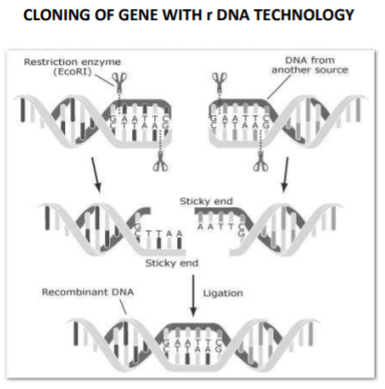 5. Add alcohol (ethanol or isopropanol) to precipitate DNA from solution

Each cell (with a few exceptions) carries a copy of the DNA sequences which make up the organism's genome.

- urification of the TARGET fragment

- Transformation of host cell and selection of transformed cells

- Culturing for the desired product.

Ques. Which one of the following is used as vector for cloning genes into higher organisms?
(a) Baculovirus
(b) Salmonella typhimurium
(c) Rhizopus nigricans (d) Retrovirus

Ques. DNA or RNA segment tagged with a radioactive molecule is called
(a) vector (b) probe
(c) clone (d) plasmid.

Ques. Restriction endonucleases are enzymes which
(a) make cuts at specific positions within the DNA molecule
(b) recognize a specific nucleotide sequence for binding of DNA ligase
(c) restrict the action of the enzyme DNA polymerase
(d) remove nucleotides from the ends of the DNA molecule.

Ques. In genetic engineering, a DNA segment (gene) of interest, is transferred to the host cell through a vector. Consider the following four agents (i-iv) in this regard and select the correct option about which one or more of these can be used as a vector/vectors.
(i) Bacterium (ii) Plasmid
(iii) Plasmodium (iv) Bacteriophage
(a) (i), (ii) and (iv) (b) (i) only
(c) (i) and (iii) (d) (ii) and (iv)

Ques. Which one of the following is commonly used in transfer of foreign DNA into crop plants?
(a) Meloidogyne incognita
(b) Agrobacterium tumefaciens
(c) Penicillium expansum
(d) Trichoderma harzianum

Ques. Gel electrophoresis is used for
(a) construction of recombinant DNA by joining with cloning vectors
(b) isolation of DNA molecules
(c) cutting of DNA into fragments
(d) separation of DNA fragments according to their size.

Ques. Restriction endonucleases
(a) are present in mammalian cells for degradation of DNA when the cell dies
(b) are used in genetic engineering for ligating two DNA molecules
(c) are used for in vitro DNA synthesis
(d) are synthesized by bacteria as part of their defense mechanism.

Ques. The Ti plasmid, is often used for making transgenic plants. The plasmid is found in
(a) Azotobacter
(b) Rhizobium of the roots of leguminous plants
(c) Agrobacterium
(d) Yeast as a 2 mm plasmid.

Ques. The most thoroughly studied of the known bacteriaplant interactions is the
(a) cyanobacterial symbiosis with some aquatic ferns
(b) gall formation on certain angiosperms by Agrobacterium
(c) nodulation of Sesbania stems by nitrogen fixing bacteria
(d) plant growth stimulation by phosphatesolubilising bacteria.

Ques. Which one of the following bacteria has found extensive use in genetic engineering work in plants ?
(a) Clostridium septicum
(b) Xanthomonas citri
(c) Bacillus coagulens
(d) Agrobacterium tumefaciens

Ques. Which of the following enzymes are used to join bits of DNA?
(a) Ligase (b) Primase
(c) DNA polymerase (d) Endonuclease

Ques. Which of the following cut the DNA from specific places?
(a) E.coli restriction endonuclease I
(b) Ligase
(c) Exonuclease
(d) Alkaline phosphate

Ques. Plasmid has been used as vector because
(a) it is circular DNA which have capacity to join to eukaryotic DNA
(b) it can move between prokaryotic and eukaryotic cells
(c) both ends show replication
(d) it has antibiotic resistance gene.

Ques. The process of replication in plasmid DNA, other than initiation, is controlled by
(a) mitochondrial gene
(b) plasmid gene
(c) bacterial gene
(d) none of these.