Class 12 Biology students should refer to the following concepts and notes for Others Notes And Questions in standard 12. These exam notes for Grade 12 Biology will be very useful for upcoming class tests and examinations and help you to score good marks

IMPORTANT SCIENTISTS AND THEIR CONTRIBUTION 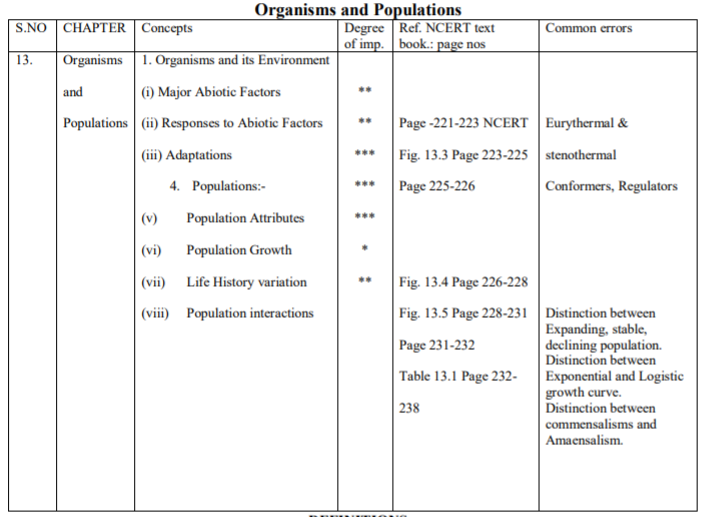 Biodiversity is defined as the totality of genes, species and ecosystems of a given region, It is the variety and variability of life form  (all animals, plants and microbes on earth) and the ecological complexes in which they occur. The term was popularized by the American sociobiologist Edward Wilson(1988)

This is reflected in the quantitative formula S = cAz, in which S represents the species richness and A the size of the area. The constant c represents y intercept ,.z is regression coefficient.

ALEXANDER VON HUMBOLDT observed within a region species richness increased with increasing explored area but only up to a limit. The relation between species richness and area for a wide variety of taxa turns out to be a rectangular hyperbola. On a logarithmic scale the relationship is a straight line described by the equation

Loss of biodiversity in a region may lead to

2) lowered resistance to environmental changes such as drought.

--- Habitat loss and fragmentation
----- Over exploitation
----- Alien species invasions eg •The Nile perch was introduced to Lake Victoria in Africa and causedthe extinction of more than 200 endemic fish
---- Co-extinctions
---- Overexploitation ,

------- broad utilitarian-as biodiversity plays a major role in many ecosystem services.
------- ethical-we need to realise that every species has an intrinsic value and we need to pass on our biological richness to future generations.

How to conserve biodiversity:

In-situ Conservation– Threatened /endangered plants and animals are provided with urgent measures to save from extinction within their natural habitat ( in wildlife sanctuaries, national parks & biosphere reserves, sacred groves / lakes-i.e. in protected areas)

Biodiversity hotspots – regions with very high levels of species richness and endemism. Norman- Myers developed the concept of hotspots in 1998 to designate priority areas for insitu conservation. They are the most threatened reservoir of biodiversity on earth. In India 2 hotspots are there, eg.Western ghats, and the Eastern Himalayas.
Ex-situ Conservation –Threatened animals& plants are taken out from their natural habitat& placed in a setting where they can be protected and given care as in botanical gardens, zoological gardens, seed/pollen/gene banks etc.

Q1. Define Biodiversity.
Ans-totality of genes, species and ecosystems of a given region

Q2.What is ecosystem diversity?
Ans.-No. of habitats or ecosystem in a given region of the biosphere.

Q5.Can you mention the estimated number of species so far identified on earth?
Ans 1.7 to1.8 million

Q10. Why should we conserve biodiversity?
Ans- (comment on the broad/narrow utilitarian and ethical value of biodiversity)

Q12. What is meant by the term ‘endemism’?
Ans-native

Please click the link below to download pdf file for CBSE Class 12 Biology - Other Chapters Notes and Questions.