Class 12 Biology students should refer to the following concepts and notes for Reproductive Health in standard 12. These exam notes for Grade 12 Biology will be very useful for upcoming class tests and examinations and help you to score good marks

A total view of human reproductive health is basic to personal well-being as well as to interpersonal relationships.

Every individual is a unique sexual being.

Adolescents are vibrant, fragile and prone to experimentation and risk taking, as a result they are the most vulnerable population as far as delinquent behavior and attitude is concerned.

Every decision has its own consequence. Any wrong decision can lead to disastrous consequence, which in turn can ruin one’s life.

Sexual adjustment is part of total personality adjustment. Self-esteem is the key to sexual maturity.

Broad based community and institutional support for reproductive health is essential.

Adolescence Reproductive and Sexual Health(ARSH) topics are to be taken care of to dispel the myths and misconception about this important aspect with focus on:

• Theories which explain what influences people's sexual choices and behaviour

• Providing accurate information about, the risks associated with sexual activity, about contraception birth control, methods of avoiding or deferring intercourse

• Dealing with peer and other social pressures on young people; providing opportunities to practice communication, negotiation and assertion skills

• Uses approaches to teaching and learning which are appropriate to young people's age, experience and cultural background

o Coitus Interruptus: Coitus interruptus means 'interrupted sex". In this birth control method, the penis is withdrawn from the vagina just before ejaculation.

Advantage - method does not require the use of any drug, does not interfere with normal body functions, and the couple can plan for pregnancy at any time they want. The main disadvantage is that it is dependent almost wholly on the man's selfcontrol. The failure rate is high at 15 - 18%.

o Rhythm method or Safe Period: Method requires a good knowledge of the female partner's menstrual cycle to identify the days on which sexual intercourse is possible without the risk of pregnancy.

• Barrier methods: In barrier methods of birth control, a barrier is placed between the penis and the vagina during intercourse so that the sperm cannot meet the ovum for fertilization.

o Male Condoms:, usually made of latex that covers the erect penis during penetration of the vagina.

o Diaphragm: vaginal - a small saucer shaped rubber sheath with a metal coil in its rim which is fitted  across the mouth of the uterus (cervix).

o Cervical Cap: The cervical cap is a small dome-shaped rubber device fitted on the cervix. It is  uncomfortable to apply and is rarely used nowadays.

o Vaginal Sponge: Small polyurethrane round device which needs to be placed inside the vagina before sexual intercourse. It releases spermicide which makes sperm inactive. It should be left in place for 8 hours  after use and can be used more than once during this time.

The sponge also acts as a barrier contraceptive to some extent since it swells up to fit across the cervix once it is inside the vagina.

• Hormonal Methods: Drugs are used to either prevent ovulation or to prevent implantation of the embryo after fertilization.

• Combined oral contraceptives contains two hormones similar to the natural hormones in a woman’s body---an estrogen and a progestin.

How the Birth Control Pill works

Mainly work by preventing ovulation. In a normal menstrual cycle, the pituitary gland secretes the hormones FSH and LH to stimulate the ovary to release an egg ('ovulation").

Progesterone in pills make the cervical mucus hostile to the sperm.

o Oral Contraceptive pills: Combined oral contraceptive pills or birth control pills contain two hormones - estrogen and progesterone. They have two functions. The main one is to prevent ovulation. The second function is to disrupt the normal growth of the internal uterine lining (endometrium) so that the embryo cannot implant in it.

o Centchroman: This is a non-hormonal non steroidal contraceptive. The main function is to cause a slowing down in the growth rate of the internal uterine lining as well as to speed up the movement of the embryo so that implantation cannot occur.

o The Patch: The patch (Ortho Evra). This is a thin band-aid like patch containing estrogen and progesterone should be applied over the skin. Releases the hormones slowly into the skin through which they are absorbed.

o Depo-provera: This birth control method consists of injecting a high dose of the hormone progesterone every three months. It acts mainly by preventing ovulation. The main disadvantage is that there may be irregular bleeding throughout the three months.

o Nuvaring: This is a thin silastic ring which should be inserted into the vagina once every month. It releases the hormones estrogen and progesterone and prevents ovulation during the menstrual cycle.

Subdermal Implants
The Norplant (a registered trademark of The Population Council for levonorgestrel subdermal implants) Implant system set of six small plastic capsules. Capsules placed under the skin of a woman’s upper arm.

Norplant capsules thicken cervical mucus making it difficult for sperm to pass through. It stops ovulation (release of eggs from ovaries) in about half of the menstrual cycles after the first year of use.

Vaginal Pessaries, Tablets, Creams or Foams:
These contain spermicides which are toxic to the sperm and should be inserted into the vagina just before coitus. Their advantages are that they are easy to apply, do not interfere with coitus and act as lubricants. Disadvantage is that they are not very effective always.

Intra-Uterine Contraceptive Devices (IUCD):
IUCDs or IUDs are contraceptive devices which are placed inside the uterus. Small, flexible plastic frame. Has copper wire or copper sleeves on it. Inserted into a woman’s uterus through her vagina. Have two strings, or threads, tied to them. Strings hang through the opening of the cervix into the vagina. A provider can remove the IUD by pulling gently on the strings with forceps.

Preventing sperm and egg from meeting. Perhaps the IUD makes it hard for sperm to move through the woman’s reproductive tract, and it reduces the ability of sperm to fertilize the egg. Prevent the egg from implanting itself in the wall of the uterus.

IUDs like Copper-T’s also come wrapped in copper. Copper is toxic to sperms and is a method
of enhancing the contraceptive effect of the IUDs.
The IUCDs can come in various shapes and sizes.

• Lippes Loop: The Lippes loop consists of a thin plastic (or polyethylene)wire bent in a series of S-shapes

• Copper T: T-shaped structure which stays inside the uterus with the long arm of the T along the uterine cavity (endometrium) and the shorter arms transversely across the upper part of the endometrium.

• Mirena:Releases a progesterone called levonorgestrel. Works by affecting ovulation, affecting the normal growth of the endometrium and by affecting the cervical mucus so that the
movement of sperm is obstructed. In the United Kingdom, hormone based IUDs are known as Intra-uterine Systems (IUS).

• Surgical Methods: These are more or less permanent methods of contraception.

o Tubal Ligation: Both the female tubes are tied off and usually cut during tubal ligation to prevent the sperm from reaching the ovum during intercourse.

o Vasectomy:The two tubes which carry sperm from the testes to the penis are the vas deferens. Tying them off and cut.

o Essure: Essure is a method in which small micro-inserts are placed at the mouth of the fallopian tubes to cause scarring and block them. This prevents sperm from reaching the ovum for fertilization. 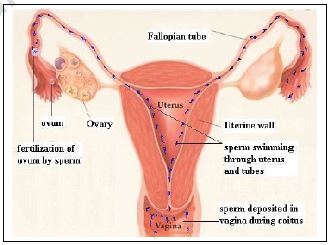 HOW PREGNANCY OCCURS
Occurs when a sperm meets with an ovum.
Ovum round about 100 microns in diameter.Ovum picked up by the fallopian tube on the same side. Tubes have long fingerlike projections called fimbria which it uses, rather like hands to pick up the ovum. Ovum moves through the tube, propelled along by long hairs growing from cells in the tubes. Like grass bending before the wind, the hairs bend towards the uterus in waves, pushing the ovum slowly towards the uterus. The egg remains viable, (alive) for about 72 hours, but is capable of being fertilized for only about 12 - 24 hours. If it remains unfertilized during this period, it disintegrates in the tube without leaving any trace. Its end products (mainly proteins) are absorbed into the bloodstream and excreted through the urine or stool. 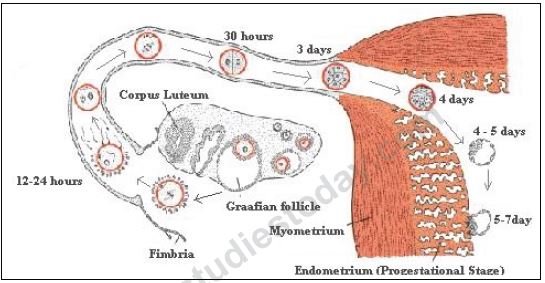 Fertilization, Implantation and Pregnancy
Sperm viable for a longer period, found in uterus 5 – 7 days after coitus.But capable of fertilizing an ovum for only 48 - 72 hours after being ejaculated. Time taken by sperm to reach tubes is between 6 – 12 hours but many authorities say it can be as early as 1 hour.

Intercourse has to take place within this narrow time frame (1-2 days before ovulation or immediately after ovulation), for a pregnancy to occur. At every intercourse normal man deposits 2 – 5 mililitre of semen in the upper part of the vagina (see diagram). Each mililitre of semen normally contains about 50 – 200 million of sperms.

Sperms swim rapidly upwards into the uterus and from there into the two tubes on either side at the rate of 3mm per hour. Takes an average of 10 hours for sperm to reach tubes.

Hundreds of sperm (estimated to be around 300) surround the ovum in the tube. They press against the membrane of the ovum attempting to penetrate it and fertilize the ovum. Finally one sperm succeeds. At once a chemical reaction is triggered off in the wall of the ovum, making it impenetrable to any other sperm. No other sperm can enter the ovum now.