Class 12 Biology students should refer to the following concepts and notes for Ecosystem in standard 12. These exam notes for Grade 12 Biology will be very useful for upcoming class tests and examinations and help you to score good marks

It is an assemblage of different communities with abiotic factors in an environment.

Primary productivity is high in terrestrial systems rather than in aquatic systems because of BIOMASS.

Detritus is the starting matter.

2. Leaching – Water soluble substances are seeped into the soil.

3. Catabolism- The role of enzymes in the conversion process.

The main source of energy is the light energy obtained from sunlight.

Plants capture 2-10% of the light energy and prepare the food and all other organisms depend on it.

Producers trap the sunlight and prepare the food.

Consumers- Herbivores depend on the producers

Carnivores depend on the herbivores

It begins with detritus

A much fraction of energy flows through this food chain as they are connected at any trophic level.

Both GFC and DFC interconnect to form FOOD WEB.

It comprises the population density (N) 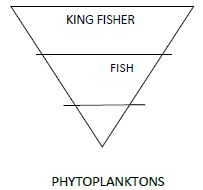 PYRAMID OF ENERGY
It is always upright because there is transfer of energy from one trophic level to another.

There is loss of energy in every state as we move upwards by 10 %.

ECOLOGICAL SUCCESSION
There is gradual change in the state of species composition from one form to other with relation to time factor in a particular habitat.
The change of species is called seral communities.

TYPES
A) Primary succession- It is a state of environment where no life exists. It may include dry, bare rock.
In such circumstances, the living state begins very slow because there is no suitable substrata-nutrients, soil. It consumes time duration and depend on factors. (REFER TO CLASS IX-SCIENCE- Environment)
B) Secondary succession-It exists in a place where life exists earlier.
Presence of soil or sediment 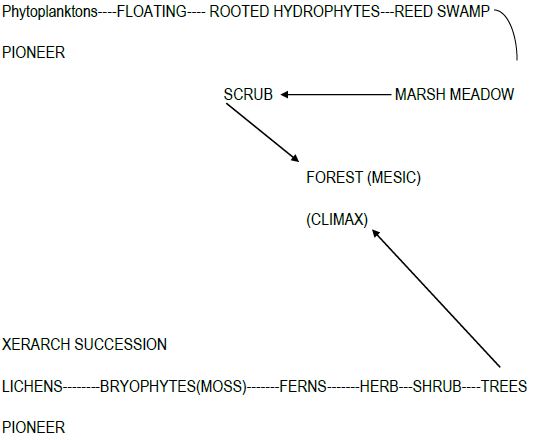 It is found that both the succession lead to mesic community.