Class 12 Biology students should refer to the following concepts and notes for Sexual Reproduction In flowering Plants in standard 12. These exam notes for Grade 12 Biology will be very useful for upcoming class tests and examinations and help you to score good marks 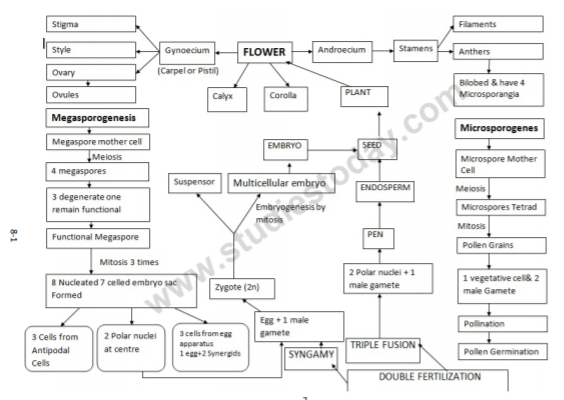 Function of calyx:protects the bud.

Function of corolla :attracts insects by its colour 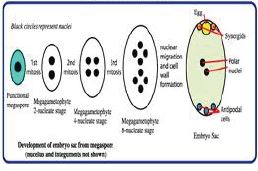 I) Apomixis- Production of seeds without fertilisation e.g.
species of Astereceae and grasses.
ii) Polyembryony- Occurrence of more than one embryo in a seed e.g.Orange. 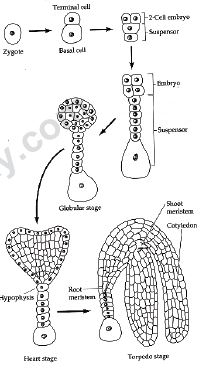 Types of cross-pollination performed by man for cropimprovement. Achieved by
i) Emasculation i.e. removal of anthers from the flower bud of a bisexual flower before the anther dehisces using a pair of forceps and
ii) Bagging i.e. covering the emasculated flowers with a bag of suitable size to protect them from contamination with unwanted pollen
If flower is unisexual, emasculation is notneeded. Flower bud bagged & when the stigmabecomes receptive, pollination is done using desired pollen & the flower is rebagged

Pollen –pistil Interaction
i) All the events from pollen deposition on the stigma until the entry of the pollen tube into the ovule are together called pollen‐pistil interaction.
ii) It is a dynamic process involving pollen recognition by stigma/pistil for compatible pollen by accepting them and if incompatible rejecting them

The process of formation of microspores from a Pollen Mother Cell (PMC) through meiosis is called microsporogenesis. The microspores, as they are formed, are arranged in a cluster of four cells i e . ., the microspore tetrad.
As the anthers mature and dehydrate, the microspores dissociate from each other and develop into pollen grains (male gametophyte). When the pollens mature, it contains two cells the vegetative cell (bigger) and generative cell (smaller). 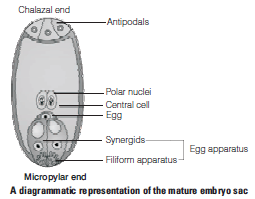 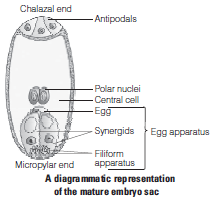 Question. In the diagram given below, show the path of a pollen tube from the pollen on the stigma into the embryo sac. Name the components of egg apparatus.
Answer : Following compatible pollination, the pollen grain germinates on the stigma to produce a pollen tube through one of the germ pores. The contents of the pollen grain (2 mole nuclei) move into the pollen tube. Pollen tube grows through the tissues of the stigma and reaches the ovary.
After reaching the ovary, pollen tube, enters the ovule through the micropyle and then enters the embryo sac by passing into one of the synergids through the filiform apparatus. It leads to the degeneration of that synergid.
The pollen tube breaks to release its contents (2 male nuclei). Out of the two male gametes one fuses with egg and the other fuses with central cell and fertilise. The component cells of the egg-apparatus in an embryo sac include, two synergids, one egg cell and the filiform apparatus.

Question. Does self-incompatibility impose any restrictions on autogamy? Give reasons and suggest the method of pollination in such plants.
Answer : Self-incompatibility imposes restrictions on autogamy. The season far this may be as Majority of flowering plants produce hermaphrodite flowers and when pollens grains comes in contact with the stigma of the same flower to continue self-pollination. Such type of continued self-pollination result in inbreeding depression. That’s why flowering plants have developed many devices to discourage self-pollination and to encourage cross-pollination. One of the major way to prevent self-pollination is self-sterility.
Self-sterility in some bisexual flowers, if the pollen grains fall on the stigma of the same flower, germination does not occur. But the same pollen grains germinate when they fall on
the stigma of other flowers of the same species. It is a genetic mechanism to prevent self pollination.

Question. In the given diagram, write the names of parts shown with lines.

Question. Why does the zygote begin to divide only after the division of Primary Endosperm Cell (PEC)?
Answer : The primary endosperm cell divides repeatedly and forms a triploid endosperm tissue. The cells of this tissue are filled with reserve food materials and are used for nutrition of the developing embryo. Embryo develops at the micropylar end of the embryo sac where zygote is situated. Most zygotes divide only after certain amount of endosperm is formed. This is an adaptation to provide assured nutrition to the developing embryo.

Question. In the figure given below label the following parts-male gametes, egg cell, polar nuclei, synergid and pollen tube
Answer : The following are the parts of this figure