Class 12 Biology students should refer to the following concepts and notes for Biotechnology And Its Application in standard 12. These exam notes for Grade 12 Biology will be very useful for upcoming class tests and examinations and help you to score good marks

v) Increased efficiency of mineral use.

Bt- cotton -- BT stands for Bacillus thuringiensis (Soil Bacteria). Bacterium produces proteins (Crystal Protein-cry I AC, cry II AB). A crystalliane insecticidal protein that kills the insects.Hence cry-Genes have been introduced in plants to produce crystal proteins as Protoxin (inactive toxin), which is converted to toxins in alkaline medium (i.e. in the gut of insects) and cause death of the insect larva. 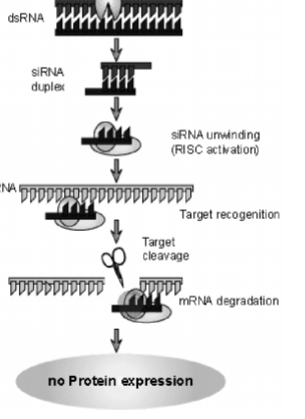 rDNA technology was applied in therapeutic application by generating genetically engineered insulin for man. In 1983, Eli Lilly, an American company prepared 2 DNA sequences coding for chains A & B.

Human insulin consists of two short Polypeptide chains A & B being linked by disulphide bridges.In man, Insulin secreted as Prohormone containing C peptides that is removed during maturation.

In rDNA technique, insulin could be generated by preparing two separate DNA sequences of A & B chain which are incorporated into plasmids of E. coli to produce insulin chains.

• Gene therapy involves correction of the gene defects in child or embryo.

• It can be cured by bone marrow transplantation or enzyme replacement therapy.

• A functional ADA-cDNA(through Retrovirus) is introduced in lymphocyte culture for genetic infusion and transfered to the patient body for normal functioning.

ELISA (Enzyme Linked Immunosorbent Assay) used to detect AIDS based on detection of antibodies produced against antigen of pathogen.

Animals with manipulated genes or a foreign gene to be expressed are called as transgenic animals. They are useful-

1. To know how genes contribute to development of disease.

Biropiracy -- Some organizations and multinational companies exploit or patent bioresources of other nations without proper authorization. Indian patent bill is there to prevent such unauthorized exploitation.

1) What is the main advantage of producing genetically engineered insulin?
Ans- i) Produces only A&B peptides ii) No C-Peptides produced iii)No need to remove CPeptides during maturation.

2) What are the advantages of Molecular diagnosis technique?
Ans- i) Accurate ii) disease can be detected at very early stage iii)Can be diagnosed even if the number of pathogens is very low.

4)What is hirudin? How do you get it?
Ans- Anti coagulant obtained from transgenic Brassica napus.

6) Why do farmers face the problems in Agro chemical based farming?
Ans – i) Too expensive ii) Conventional breeding procedure do not ensure increased production.

Five mark question
1)Explain the steps involved in the production of genetically engineered insulin?
Ans- i) Human insulin consists of 51 amino acids arranged in chains of A and B bearing 21 and 30 a. a respectively interconnected by disulphide bridges. 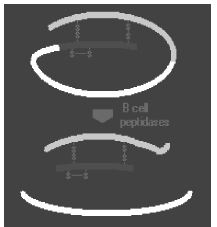 2. What is the main objective of Gene therapy in biotechnological techniques?
Ans Gene therapy involves replacement of defective genes by normal genes.

4.Which kind of bioweapon is most widely used ?
Ans Bacillus anthracis.

5.What is the main objective of herbicide resistant GM crop ?
Ans It effectively eliminates the weeds without involving manual labour .

7.Gene medicine refers to use of gene manipulation technology to ameliorate or
Ans even permanently cure diseases in human. Name the technique. 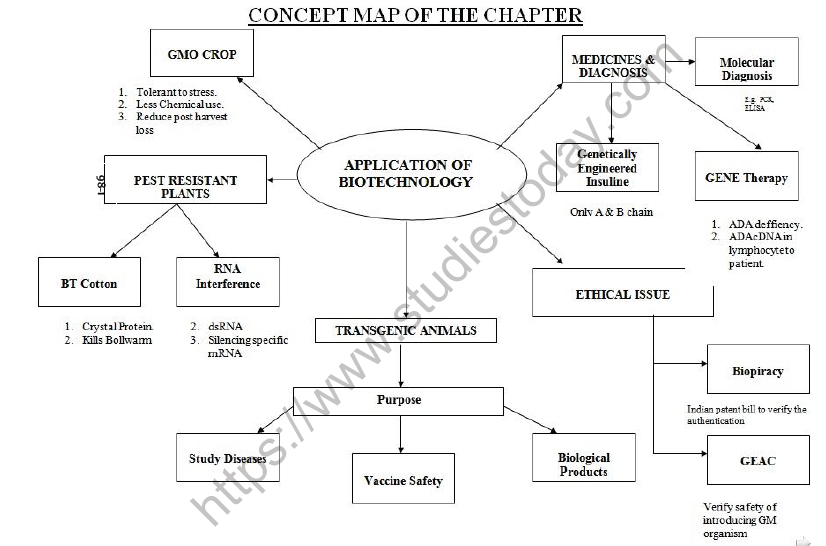 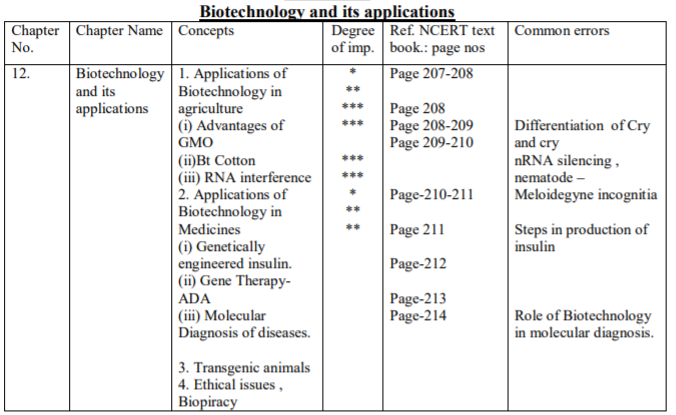 BIO PATENT :- A right given to inventor to get the economic benefits of the product. It also prevents the others to get benefit without permission.

BIOPIRACY :- The use of bio resources by multinationals companies & other organizations with out proper authorization from the countries & people concerned without compensatory payment.

ELISA :- It is a diagnostic technique based on the principle of antigen- antibody interaction.

GENE THERAPY :- A collection of methods that allow correction of agene defect that has been diagnosed in a child / embryo.

GREEN REVOLUTION :- The process of increase in crop yields with the use of improved crop varieties, better management practices& use of agrochemicals.

PROBE :- These are the detectable sequence of polynucleotide which are used to detect the presence of complimentary DNA sequence.

TRANSGENIC ANIMALS :- Animals that had their DNA manipulated to possess & express an extra (Foreign) gene are known as transgenic animals.

TRANSPOSONS :- these are the mobile genetic elements which replicate via an RNA intermediate.

Patent
A set of exclusive rights granted by a state (national government) to an inventors or their assignee for a limited period of time in exchange for a public disclosure of an invention.
Patents are supposed to satisfy three criteria of : Novelty, non-obviousness, and Utility.
Novelty implies that the innovation must be new. It cannot be part of ‘prior art’ or existing knowledge. Non-obviousness implies that it may not be documented but is otherwise well known. The discored fact or product should be of a particular use for the human beings.

Controversies in India regarding patent and biopiracy

Turmeric : In May, 1995 the US Patent Office granted to the University of Mississippi Medical Center a patent for “Use of Turmeric in Wound Healing.”
Consider the implication of ‘turmeric patent’. If an Indian in America sprinkles turmeric powder – just as her ancestors in India have done for centuries – on her child’s scrape, she would in fact be infringing US patent laws and would be open to prosecution.
The patent was promptly challenged by Dr. R A Mashelkar, an Indian scientist who has done much to awaken India to Intellectual property Rights issues. After four months of submissions it was established that the use of turmeric as a healing agent was well-known in India for centuries. The patent was revoked.

Neem : In 1996, Vandana Shiva challenged the patent ranted to the firm of W.R. Grace & Co. by the European Patent Office, Munich for ‘fungicidal uses of neem oil’. Although the patent has been granted on an extraction technique, the Indian press described it as a patent on the neem tree itself: the result was widespread public outcry, which was echoed throughout the developing world. Vandana Shiva and Ajay phadke, who had researched neem in India, flagged ancient Indian texts to point out that there was on ‘novelty’ factor in neem’s magical properties that Grace & Co. had unveiled – Indians had known them for long. Legal action by the Indian government followed, with the patent eventually being overturned in 2005.

Basmati Rice : In September 1997, a Texas company called Rice Tec won a patent on “basmati rice lines and grains.” The patent secured lines of basmati and basmati-like rice and ways of selecting that rice for breeding. Rice Tec, owned by Prince Hans-Adam of Liechtenstein, international outrage over allegations of biopiracy. It has also caused a brief diplomatic crisis between India and United States with India threatening to take the matter to WTO ( World Trade Organization) as a violation of TRIPS (trade-related aspects of intellectual property rights) which could have resulted in a major embarrassment for the United States. Both voluntarily, and due to review decisions by the United States patent Office, Rice Tec lost most of the claims of the patent.