Class 12 Biology students should refer to the following concepts and notes for Molecular Basis Of Inheritance in standard 12. These exam notes for Grade 12 Biology will be very useful for upcoming class tests and examinations and help you to score good marks

→ Components of DNA are (i) deoxyribose sugar, (ii) a phosphate, and (iii) nitrogen containing organic bases.

→ DNA double helix with sugar phosphate back bone on outside and paired bases inside.

→ Planes of the bases perpendicular to helix axis.

→ DNA found both in nucleus and cytoplasm.

→ DNA is mostly right handed and B form. 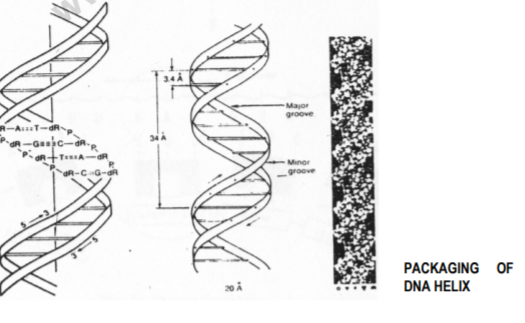 DNA AS THE GENETIC MATERIAL

• Two strains of bacteria are S-type and R-type cells.

# Transformation - change in the genetic constitution of an organism by picking up genes present in the remains of its relatives.

From this we conclude that DNA is the genetic material.
Semi conservative nature of DNA Mathew Messelson and Franklin start. 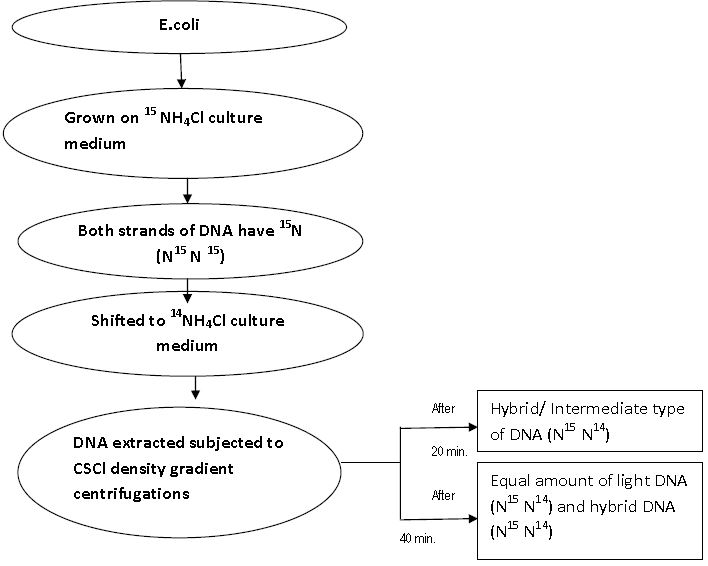 Replication of DNA In Eukaryotes:
Definition: "Process by which DNA produces daughter DNA molecules which are exact copies of the original DNA." In eukaryotes, DNA is double stranded. The two strands are complementary to each other because of their base sequences.

Semi-conservative method of DNA replication Important points:
(i) Most common method of DNA replication.
(ii) Takes place in the nucleus where the DNA is present in the chromosomes.
(iii) Replication takes place in the S-phase (synthesis phase) of the interphase nucleus.
(iv) Deoxyribose nucleotides needed for formation of new DNA strands are present in nucleoplasm. At the time of replication, the two strands of DNA first separate. Each strand then acts as a template for the formation of a new strand. A new strand is constructed on each old strand, and two exactly identical double stranded DNA molecules are formed. In each new DNA molecule, one strand is old (original) while the other is newly formed. Hence, Watson and Crick described this method as semi-conservative replication. (A) An overall process of DNA replication showing replication fork and formation of new strands template and lagging template.

The various steps involved in this process are summarized as follows:
i. Mechanism of replication starts at a specific point of the DNA molecule, called origin.
ii. At origin, DNA strand breaks because of an incision (nick). This is made by an enzyme called incision enzyme (endonuclease).
iii. The hydrogen bonds joining the two strands are broken by the enzyme.
iv. The two strands start unwinding. This takes place with the help of a DNA unwinding enzyme Helicases.
Two polynucleotide strands are thus separated.
v. The point where the two strands separate appears like a fork or a Y-shape. This is described as a replicating fork.
vi. A new strand is constructed on each old strand. This takes place with the help of a small RNA primer molecule which is complimentary to the DNA at that point.
vii. Each old DNA strand acts as a template (site) for the construction of new strand. The RNA primer attaches itself to the old strand and attracts the enzymes (DNA polymerase III) which add new nucleotides through base complementation. The deoxyribose nucleotides are present in the surrounding nucleoplasm. New DNA strand is thus constructed opposite to each old strand.
viii. Formation of new complementary strand always begins at the 3' end of the template strand (original strand)
and progresses towards the 5' end (ie in 3' - 5' direction). Since the new strand is antiparallel to the template strand, it is obvious that the new strand itself is always developed in the, 5'-3' direction. For this reason when the two original strands separate (then with respect to the origin of separation), one acts as 3'-5' template while the other acts as 5'- 3' template.
ix. Of the two, the replication of 3'-5' template begins first. Hence the new strand formed on it is called the leading strand. The other template (5'-3') must begin replication at the fork and progress back toward the previously transcribed fragment. The new strand formed on it is called the lagging strand.
x. Replication of the lagging strand takes place in small fragments called Okazaki fragments. These are then connected together by the enzyme ligase.
xi. Replication may take place in only one direction on the DNA helix (unidirectional) or in two directions (bidirectional).
xii. At the end of the process, two double stranded DNA molecules are formed from the original DNA molecule.

1. Messenger RNA or mRNA- has the information to make a protein. It is very unstable and comprises
~5% of total RNA polymer. Its length is highly variable, of the range 7503000 nucleotides.

2. Transfer RNA or tRNA- small molecule, about 90 nucleotides long. It is highly folded into an elaborate 3-d structure and comprises about 15% of total RNA.

3. Ribosomal RNA or rRNA- 80% of the total RNA, is associated with subcellular structures called ribosomes in which the polymer length varies from 120-3000 nucleotides and is folded into an elaborate structure which give ribosomes their shape. 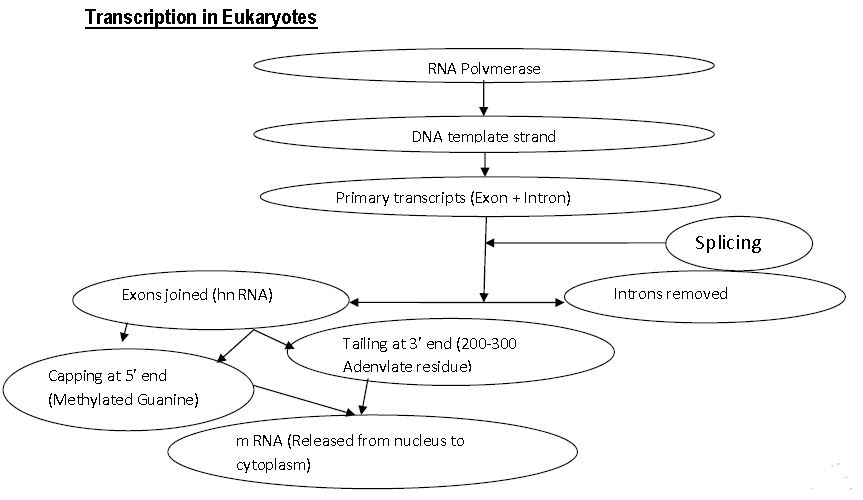 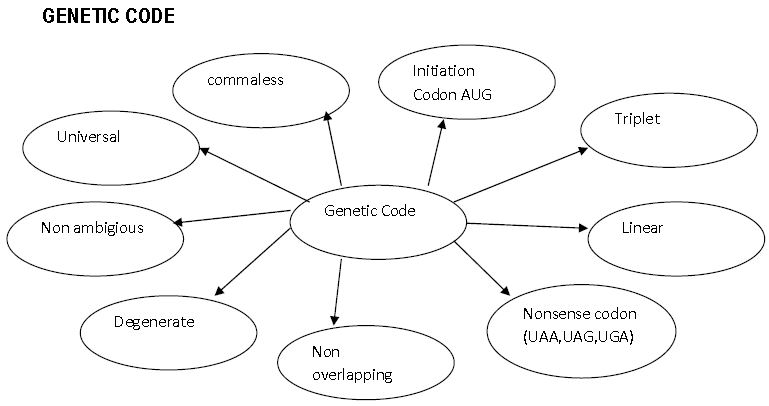 Translation:-
♦ Process of joining of amino acids by peptide bond to form a polypeptide 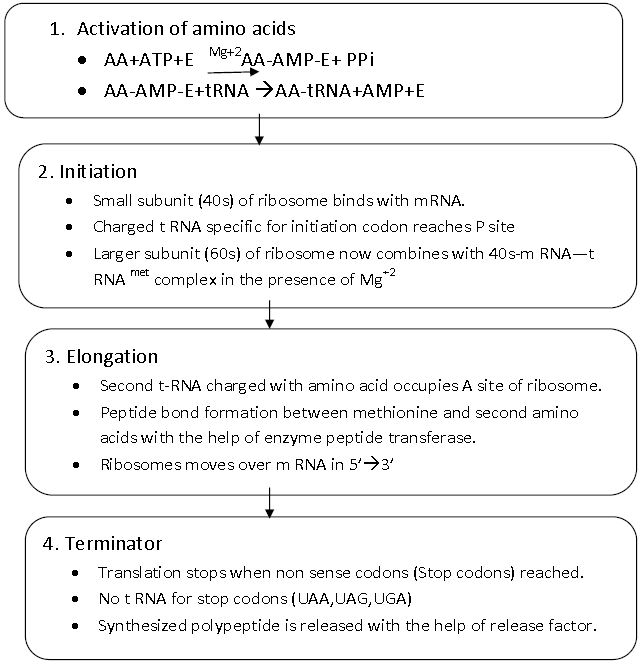 LAC OPERON
*Discovered by Jacob and Manod.
*Experimented on E.coli.
Refer to figure number 6.14 of page 117 of text Book 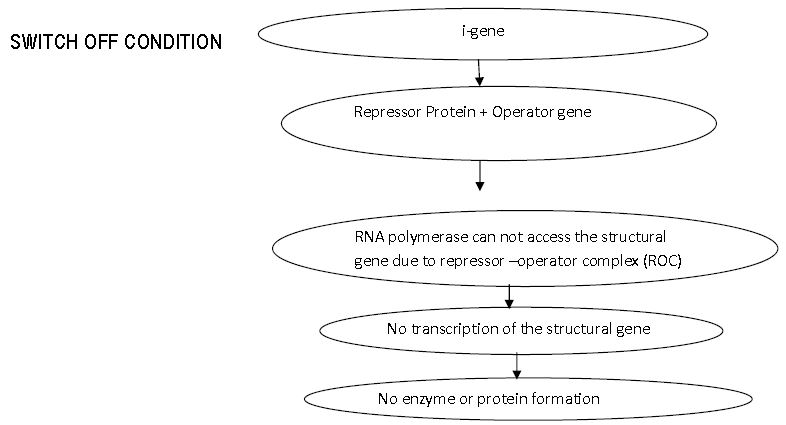 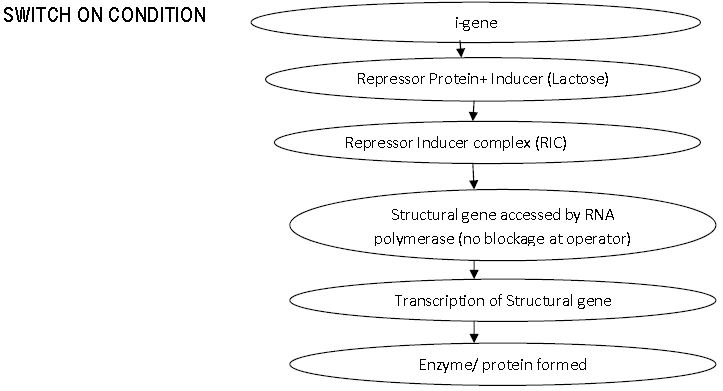 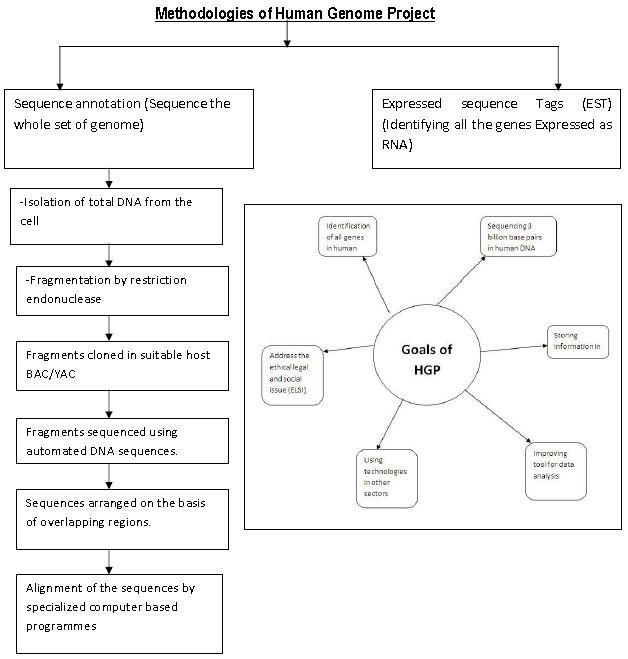 VApplication of Human genome project
-: Identification of defective genes.
-: Opportunity to offer early treatment.
-: Identification of genes that confer susceptibility to certain disease.
-: Prediction of protein that the genes produce.
-: Drug designing to enhance or inhibit the activities of the proteins. 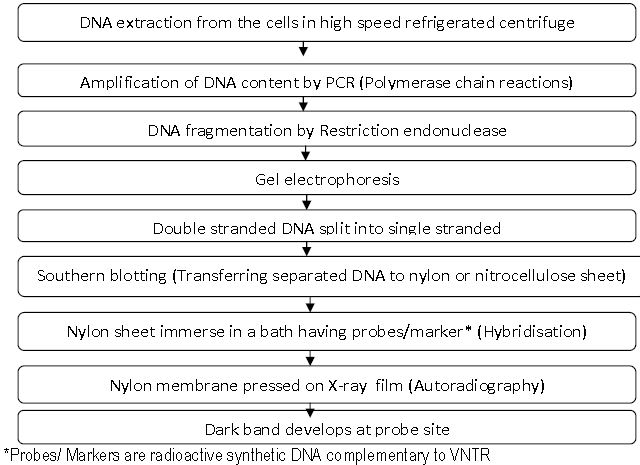 1. Name the genetic material in TMV.

2. Write the scientific name of the plant on which Taylor et al performed their experiment.

3. What would be the proportion of light and hybrid density DNA molecules after 80 minutes of a single cell of E. coli growth?

4. When does DNA replicate in the cell cycle ?

5. Name the amino acids having only one codon.

1. What is meant by semiconservative nature of DNA replication?

2. What are the functions of DNA polymerase?

3. What is frame shift mutation ? Name the type of mutation that does not affect protein synthesis .

4. What are the untranslated regions (UTRs) ?

11. Why is lactose considered an inducer in lac operon?
Ans: Lactose binds to repressor molecule and prevents it from binding with the operator, as a result RNA polymerase binds to promoter-operator region to transcribe the structural genes. Thus the lac operon is switched on.

13. What is cistron?
Ans: Region of the DNA template (gene) coding for a single protein is called cistron.

1.Describe the discontinuous synthesis of DNA.

3.Name the three RNA Polymerases found in eukaryotes and mention their functions.

4.Explain the two major approaches involved in the sequencing of genomes.

1.Describe the salient features of the double helical model of DNA.

2. Bring out the salient features of genetic code .

3.Describe in detail the steps in the technique of DNA finger printing.

4.Describe the process of replication of DNA.

6. What are the differences between DNA and RNA?
Ans:

8. What do you mean by grooves of DNA?
Ans: DNA backbone is somewhat tilted from its vertical axis, it has two uneven grooves or furrowings i.e., one major groove (about 12 A°) and one minor groove (about 6 A°). They are the protein binding sites of DNA.

9. Recall the experiment done by Frederick Griffith. If the RNA, instead of DNA was the genetic material, would the heat killed strain of strain of streptococcus have transformed the r-strain into virulent strain? Explain your answer.
Ans: RNA is more labile and prone to degradation (owing to the presence of 2’-OH group in its ribose). Hence heat-killed S-strain may not have retained its ability to transform the R-strain.

10. What do you mean by selfish DNA?
Ans: DNA whose role appears to be to mediate its own replicationand survival within the genome, e.g. some satellite DNA, and transposable elements.

11. What are the differences between euchromatin and heterochromatin?
Ans: