Class 12 Biology students should refer to the following concepts and notes for Organisms And Populations in standard 12. These exam notes for Grade 12 Biology will be very useful for upcoming class tests and examinations and help you to score good marks

Question. When does the growth rate of a population following the logistic model equal zero? The logistic model is given as dN/dt = rN(l-N/K) NEET 2016
(a) when N nears the carrying capacity of the habitat
(b) when N/K equals zero
(c) when death rate is greater than birth rate
(d) when N/K is exactly one
Answer : D

Question. Which model is considered a more realistic one?
(a) Logistic model
(b) Exponential model
(c) Geometric model
(d) J-shaped model
Answer : A

Question. Interspecific interaction could be
(a) beneficial
(b) detrimental
(c) neutral
(d) All of these
Answer : D

Question. If ‘+’ sign is assigned to beneficial interaction, ‘–’sign to detrimental and ‘0’ sign to neutral interaction,then the population interaction represented by ‘+’ ‘–’refers to
(a) mutualism
(b) amensalism
(c) commensalism
(d) parasitism
Answer : D

Question. The population interaction in which free-living organism that catches, kills and devours individuals of other species called prey is called
(a) parasitism
(b) predation
(c) amensalism
(d) commensalism
Answer : B

Question. The prickly pear cactus becomes unusually abundant after its introduction in Australia because it
(a) does not have its predator
(b) formed new mycorrhizal association
(c) lost its thorns
(d) All of the above
Answer : A

Question. ‘Cryptically-coloured’ (camouflaged) is a technique through which prey can
(a) feed abundantly
(b) lessen the impact of predator
(c) increase their number
(d) increase their reproductive fitness
Answer : B

Question. Monarch butterflies are highly distasteful to predator due to
(a) its ugly look
(b) a special chemical present in his body
(c) Both (a) and (b)
(d) a poison secreted by their special glands
Answer : B

Question. You never see any cattle or goat browsing on Calotropis due to
(a) its appearance
(b) production of foul odour
(c) production of cardiac glycosides
(d) distastefulness of its leaves
Answer : C

Question. Which of the following is not an example of a defence used by plants against herbivores?
(a) Production of caffeine, tannins and quinine
(b) More production of non-woody tissues
(c) Production of hairs, thorns, spines
(d) Production of hormone-like chemicals that interfere with insect metamorphosis
Answer : B

Question. Which of the following is not an example of prey-predator relationship?
(a) Tiger eating deer
(b) Plant Nepenthes trapping an insect
(c) Bacteria decomposing organic matter
(d) Crocodile killing a man
Answer : C

Question. In which of the following interactions both partners are adversely affected?
(a) Competition
(b) Predation
(c) Parasitism
(d) Mutualism
Answer : A

Question. On the rocky sea coasts of Scotland, the larger and competitively superior barnacle Balanus dominates the intertidal areas and excludes the smaller barnacle Chathamalus from that zone.
Which kind of interaction is being depicted by this example?
(a) Predator
(b) Parasitism
(c) Commensalism
(d) Competition
Answer : D

Question. Level of competition between species depends on
(a) availability of resources
(b) population density
(c) group interaction of organism
(d) All of the above
Answer : D

Question. A species whose distribution is restricted to a small geographical area because of the presence of a competitively superior species is found to expand its distributional range dramatically when the competing species is experimentally removed. This is called as
(a) competitive exclusion
(b) competitive release
(c) predation
(d) mutualism
Answer : A

Question. The principle of competitive exclusion was stated by
(a) C Darwin
(b) GF Gause
(c) MacArthur
(d) Verhulst and Pearl
Answer : B

Question. Species facing competition might evolve mechanism that promotes coexistence rather than exclusion. One such mechanism is
(a) competitive release
(b) resource partitioning
(c) coevolution
(d) None of the above
Answer : B

Question. Read the following reasons for the adaptation in parasites.
I. loss of unnecessary organs.
II. presence of adhesive organs.
III. origin of suckers to cling to host.
IV. loss of digestive system.
V. high reproductive capacity.
Choose the correct option.
(a) I, III and IV
(b) II, IV and V
(c) I, IV and V
(d) I, II, III, IV and V
Answer : D

Question. Parasite that feed on the external surface of the host organism is called
(a) endoparasite
(b) ectoparasite
(c) brood parasite
(d) None of these
Answer : B

Question. An interaction in which one organism is benefitted and other is unaffected
(a) predation
(b) commensalism
(c) mutualism
(d) parasitism
Answer : B

Ecology: It is a branch of biology which studies the interactions i) among organisms and ii) between the organism and its physical ( abiotic) environment.

Organism: Individual of a species.

Population: Population is a group of individuals of the same species which can interbreed among themselves and live in a localized area.

Alpine tundra: Alpine tundra is located on mountains throughout the world at high altitude where trees cannot grow. The growing season is approximately 180 days. The night time temperature is usually below freezing. Unlike the arctic tundra, the soil in the alpine is well drained.

Group of animals that live in Alpine tundra:

Coniferous forests: Coniferous forests are made up mainly of cone-bearing or coniferous trees, such as spruces, hemlocks, pines and firs. The leaves of these trees are either small and needle-like or scale-like and most stay green all year around (evergreen). All are softwoods able to survive cold temperatures and acidic soil.

Temperate Forests: The term ‘temperate forest’ is very broad. It covers the forests found between the tropical and subtropical regions and the barren, treeless lands of the far north and extreme south.

Tropical forest: "Tropical forests" encompass the idyllic rainforest, the remote cloud forest, and the lesser-known but equally endangered dry forest, pine savanna and much, much more. They are not one ecosystem, but millions of unique ecosystems.

• Influences life of organisms. No life without water.

• Productivity and distribution of plants are water dependent.

• Organisms may be Euryhaline or Stenohaline.

•  Sciophytes need to use diurnal and seasonal light intensity of forage, migration and reproduction.

•  Nature and proportion of soil in a place depends on climate, weathering process and types of soil.

• Physical and chemical properties determine type of plants and Animals that survive in a habitat.

Response of organisms to environmental condition 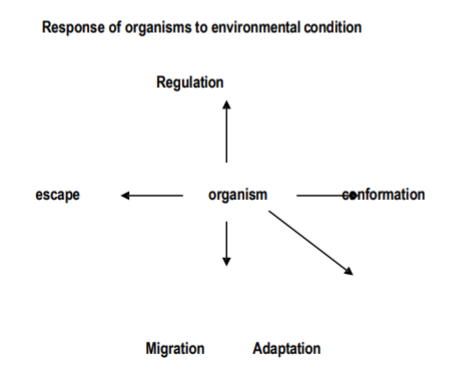 Suspension
• Organisms suspend their metabolic activities during stressful condition
• Resume their function at the return of favorable conditions.

Adaptation
• Morphological, physiological and behavioral changes that enable organisms to adjust to the ever changing environment .

Factors that affect the size of population
Food
availability
Weather
Predation pressure
Competition
Density of population at any time at a given
place depends on Natality, Mortality, Emigration
Immigration