Class 12 Biology students should refer to the following concepts and notes for Strategies For Enhancement In Food Production in standard 12. These exam notes for Grade 12 Biology will be very useful for upcoming class tests and examinations and help you to score good marks

1.) Out crossing- mating within the same breed but not having ancestors.

2.) Crossbreeding- superior males of one breed are mated with superior females of another breed to get better progency.e.g.- cows of inferior breed with superior bull. Hisardale- is a new breed of sheep developed in Punjab by crossing Bikaneri Eves and Marano Rams.

(a)Artificial insemination- semen of superior male is collected and injected unto the reproductive tract of selected female. The spread of certain diseases can be controlled by this method.

(b) MOET- Technique for herd improvement by successful production of hybrids.

i) Hormone(FSH) are administered to the cow for inducing follicular maturation and super ovulation.

ii)Cow produces 6-8 eggs instead of one egg & is either mated with elite bull or artificially inseminated.

2.Evaluation and selection of parents-Germplasm is evaluated to identify plants with desirable traits.

4.Selection and testing of superior recombinants-Selection of the plants having desired character combinations.

5.Testing, release and commercialization of new cultivars-Newly selected lines are evaluated for their yield, agronomic traits, disease resistance etc. and released into the market.

Eg-Spirulina can be grown in waste water (from potato processing plant) to produce protein rich biomass treated as food.

In this method, hybridization of different species could produce variants of economic value as follows:

i) Isolation of desired single cells

Question…… is the agricultural practice of feeding, breeding and raising livestock. Choose the most appropriate word to fill in the blank.
(a) Animal husbandry
(b) Cattle improvement
(c) Both (a) and (b)
(d) Cattle farming
Answer : A

Question. Crustacean fishery is connected with exploitation of
(a) oysters and crabs
(b) mussels and squids
(c) shell and cuttle fish
(d) crabs and prawn
Answer : D

Question. The management of animals for milk and its products for human consumption is called
(a) dairy farming
(b) poultry farming
(c) white revolution
(d) livestock improvement
Answer : A

Question. In dairy farm management
(a) livestock improvement is done
(b) milk yield and quality is improved
(c) regular inspection of animals
(d) All of the above
Answer : D

Question. Choose the correct option.
(a) More than 70% of the world livestock population is in India and China
(b) The contribution of India and china to the world farm produce is about 25%
(c) Important livestock of India are cattle and buffaloes
(d) All of the above
Answer : D

Question. Which of the following qualities is considered for the selection of good breeds?
(a) High yielding potential
(b) Resistance to diseases
(c) Breed with pureline
(d) Both (a) and (b)
Answer : D

Question. What measures should be taken for cattles, to realise the yield potential?
(a) They have to be housed well
(b) Feeding should be in scientific manner
(c) Hygienic milking, storage and transport of milk
(d) All of the above
Answer : D

Question. Which of the following birds are domesticated in poultry farm management?
(a) Chicken
(b) Ducks
(c) Turkey and geese
(d) All of these
Answer : D

Question. Which of the following points should be kept into consideration for management of poultry farm?
A. Selection of disease free and suitable breeds
B. Proper and safe farm conditions
C. Proper feed and water
D. Hygiene and healthcare
(a) A,B,C
(b) A,C,D
(c) A,B,C,D
(d) None of these
Answer : C

Question. An infectious bacterial disease of cattle, buffaloes, sheeps and goats is
(a) anthrax
(b) rinderpest
(c) tick fever
(d) necrosis
Answer : A

Question. Which of the following is an aim of animal breeding?
(a) Increasing the yield of animals
(b) Improving the desirable qualities of the produce
(c) Producing better looking animals
(d) Both (a) and (b)
Answer : D

Question. Livestock refers to
(a) pet animals
(b) poultry and pet animals
(c) domestic animals which are kept for use or profit
(d) None of the above
Answer : C

Question. The practices concerned with the improvement in animal husbandry include
(a) management of farm and farm animals
(b) management of animals and plants at a same place
(c) genetic engineering
(d) None of the above
Answer : A

Question. In MOET procedure, to induce follicular maturation and superovulation which of the following hormones are administered to the cow?
(a) Follicle stimulating hormone
(b) Progesterone
(c) Androgen
(d) Oxytocin
Answer : A

Question. Saccharum barberi and Saccharum officinarum are varieties of
(a) sugarcane
(b) maize
(c) wheat
(d) rice
Answer : A

Question. The process by which genetic variations are created through changes in the base sequences within genes is
(a) plant breeding
(b) interspecific hybridisation
(c) outcrossing
(d) mutation
Answer : D

Q2.What is blue and green revolution?

Q3. What is inbreeding depression?

Q4. What is ‘Heterosis’ or hybrid vigour?

Q5.Name the Indian variety of rice patented by an American company.

Q1. What is Biofortification?

Q2.Which part of the plant is best suited for making virus free plants?

Q3.What is breed? What are the objectives of animal breeding?

Q5.What is artificial insemination? What is its importance?

Q6. What are the differences between aqua and pisciculture?

Q7. What is animal husbandry?

Q9. Name the most common species of honey bees of India? What are the products from the honey bees?

Q10. What is germplasm? How it is maintained?

Q1.What does inbreeding mean? Suggest its advantages. What is the danger of inbreeding?

Q2.Name the methods employed in animal breeding. Which method is the best? Why?

Q3. Explain the procedure of MOET technique in cattle.

Q4. What is interspecific hybridization ? Give one example of crop in which it is practiced and mention one advantage.

Q5. What is cross-breeding ? What advantages does it have? Give an example

Q1. Explain the points that have to be considered for successful bee- keeping?

Hint: Collection of variability, Evaluation and selection of parents, Cross hybridisation among the selected parents, Selection of testing of superior Recombinants, Testing , release and comercialisation of new cultivars 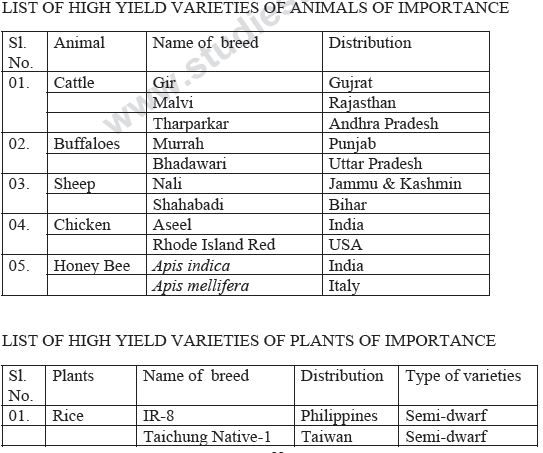