Class 12 Biology students should refer to the following concepts and notes for Principles Of Inheritance And Variation Notes in standard 12. These exam notes for Grade 12 Biology will be very useful for upcoming class tests and examinations and help you to score good marks

Principles of Inheritance and Variation

Genetics: Genetics is a branch of biology which deals with principles of inheritance and its practices.

Heredity: It is transmission of traits from one generation to another through the molecular mechanism.

Variation: Variation is the degree by which progeny differ from their parents.

Allele: Various or slightly different forms of a gene, having same position on chromosomes.

Phenotype: The observable or external characteristics of an organism.

Genotype: The genetic constitution of an organism.

Monohybrid cross : A cross between two individuals of species, considering the inheritance of single pair of contrasting character e.g., a cross between pure tall (TT) and Dwarf (tt).

Dihybrid cross: A cross between two individuals of a species, considering the inheritance of two pairs of contrasting traits/characters e.g., a cross between Round & Yellow seeds (RRYY) and wrinkled & green seeds (rryy).

Incomplete dominance: When one of the two alleles of a gene is incompletely dominant over the other allele.

Co-dominance: When two alleles of a gene are equally dominant and express themselves even when they are together.

Aneuploidy : The phenomenon of gain or loss of one or more chromosome(s), that results due to failure of separation of homologous pair of chromosomes during meiosis.

Trisomy : The condition in which a particular chromosome is present in three copies in a diploid cell/nucleus.

Pedigree Analysis : The analysis of the distribution and movement of trait in a series of generations of a family.

Law of Dominance: i) Characters are controlled by discrete units called factors. Ii) Factors occur in pairs. iii) In a dissimilar pair of other (recessive).

Law of Segregation: The members of allelic pair that remained together in the parent Segregate/separate during gamete formation and only one of the factors enters a gamete.

Test Cross: When offspring or individual with dominant phenotype, whose genotype is not known, is crossed with an individual who is homozygous recessive for the trait.

Aneuploidy: Failure of segregation of chromatids during cell division results in the gain or loss of a chromosome(s) called aneuploidy.

Polyploidy: Failure of cytokinesis after telophase stage of cell division results in an increase in a whole set of chromosomes in an organism and this phenomenon is known as polyploidy.

Pleiotropism: Pleiotropism is defined as a phenomenon when single gene may produce more than one effect (the multiple effect of a gene) or control several phenotypes depending on its position.

Carrier: A person with a ‘defective recessive gene’ and a ‘dominant normal gene’ on homologous pair of chromosomes and therefore, not affected by the disorder but transmit the defective gene to the next progeny through gametes.

Genome: All the genetic material in the chromosomes of a particular organism; size generally given as its total number of base pairs.

Hemophilia = sex-linked recessive. Males get it most often.

Homologous chromosomes: A pair of chromosomes containing the same linear gene sequences, each derived from one parent

Karyotype: Photomicrograph of an individual’s chromosomes arranged in a standard format showing the number, size, and shape of each chromosome type.

Linkage map: relative positions of genetic loci on a chromosome, determined on the basis of how often the loci are inherited together.

Locus (pl. loci): The position on a chromosome of a gene or other chromosome marker; also, the DNA at that position. The use of locus is sometimes restricted to mean regions of DNA that are expressed.

Non-Disjunction: When homologous chromosomes fail to segregate properly during meiosis. Down syndrome, Turner syndrome and Klinefelter syndrome result from non-disjunction. 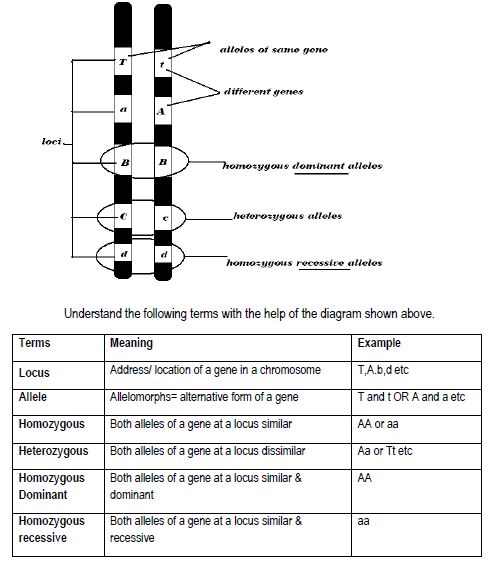 Exceptions to Mendel’s laws of inheritance

II. Co-dominance ( Multiple allelism)
When both dominant and recessive allele lack dominant recessive relationship, then both are expressed side by side. This phenomenon is known as co-dominance.

III. Polygenic Inheritance
At least in some instances the same character can be determined by more than one gene, each with the same but cumulative phenotypic effect Quantitative characters like plant height, yield of crops (size, shape and number of seeds and fruits per plant), intelligence in human beings and milk yield in animals have been found to be determined by many genes and their effects have been found to be cumulative. This phenomenon is known as polygenic inheritance. This is also considered as “ Quantitative inheritance” or “multiple factor inheritance”.
Other examples that can be studied are the kernel colour in wheat and inheritance of cob length in maize.

IV. Pleiotropism
Pleiotropism is defined as a phenomenon when single gene may produce more than one effect (the multiple effect of a gene) or control several phenotypes depending on its position.

Eg.In drosophila white eye mutation leads to depigmentation in many other parts of the body, giving a pleitropic effect.

In transgenic organisms, the introduced gene can produce different effects depending on where the gene has introgressed. 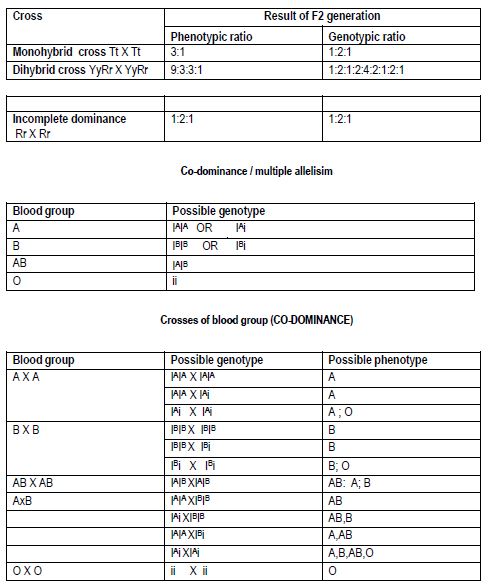 Please click the link below to download pdf file for CBSE Class 12 Biology - Principles of Inheritance and Variation.