Read and download free pdf of CBSE Class 12 Biology Evolution Worksheet Set B. Students and teachers of Class 12 Biology can get free printable Worksheets for Class 12 Biology in PDF format prepared as per the latest syllabus and examination pattern in your schools. Standard 12 students should practice questions and answers given here for Biology in Grade 12 which will help them to improve your knowledge of all important chapters and its topics. Students should also download free pdf of Class 12 Biology Worksheets prepared by school teachers as per the latest NCERT, CBSE, KVS books and syllabus issued this academic year and solve important problems provided here with solutions on daily basis to get more score in school exams and tests

Class 12 Biology students should refer to the following printable worksheet in Pdf for Evolution in standard 12. This test paper with questions and answers for Grade 12 Biology will be very useful for exams and help you to score good marks

Question- Find the odd one out w.r.t. evolution

Question- In 1938, a coelacanth was found in

Question- Fossils discovered in Java in 1891 belonged to

Question-Which of the following is not vestigeal organ in human beings?

(3) Vermiform appendix and nictitating membrane of the eye

Question-Which of the following is a vestigial organ?

Question- Find the odd one out related to evolution

(3) Wings of butterfly and of birds

Question-Which of the following is not a vestigial organ?

Question-The origin of seeds in the land plants was achieved about 345 million years ago, in lineages recognised as ancestral to all more advanced vascular plants in

Question-Evolutionary process, giving rise to new species adapted to new habitats and ways of life, is called as adaptive radiation, for example

Question-Which of the following is a placental mammal not marsupial?

Question-When more than one adaptive radiations appeared to have occurred in an isolated geographical area, it is called

Question-Which of the following fact is not true for Homo habilis?

(2) They were the first human-like being

(3) They showed the hominid features

Question- Theory of panspermia was proposed to explain the

Question-As horse evolved, there was progressive reduction in number of toes. Which of the following is correct sequence in the evolution of horse?

Question-According to the discovery made in 1980's. RNA can act like enzyme to assemble new RNA molecules on RNA template. Which of the following statements is not proved by this theory?

(2) Perhaps the first macromolecule was RNA

(3) Coacervates were the basis for the first cell

(4) After formation of RNA, stability of molecule improved by surrounding RNA within a coacervate

Question- An experiment to prove that organic compounds were the basis of life, was performed by

Question- Theory of abiogenesis or spontaneous generation was finally disapproved by

Question-Which of the following theory is related to transfer of life from one planet to another?

Question-According to cosmozoic theory, life comes on earth from other planets in space in the form of

(3) The Origin of Species

Question-Origin of earth dates back to

Question-The English scientist who worked on the origin of life and settled in India?

Question-All of the following conditions were present on early earth, except

Question-What did S.L. Miller observe in his experimental set-up?

(1) Formation of sugars and nitrogenous bases

Question-The proponent of the theory of spontaneous generation was

Question- S.L.Miller conducted an experiment in 1953 to support the

Question-Who finally refuted the theory of spontaneous generation and experimentally disproved it?

1 State the theory of spontaneous generation.

2 What is founder effect?

4 What causes speciation according to Hugo de Vries?

5 Name any two vertebrate body parts that are homologous to human forelimbs?

6 What are the key concepts in the evolution theory of Darwin?

7 Why are the wings of butterfly and of a bat called analogous?

8 How is Darwin’s concept of evolution different from de Vries? 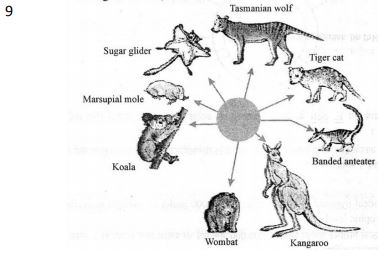 a) Mention the specific geographical region where these organisms are found.

b) Name and explain the phenomenon that has resulted in the evolution of such diverse species in the region.