1 Name two Indian Companies which are also known as MNC.

2 Point out the main objective of MGNREGA 2005.

3 In which year United Nations adopted the „UN Guidelines for Consumer Protection‟?

Ans: All the suggestions or proposals about overcoming various challenges to democracy are called „democracy reform‟ or „political reform‟.


5 What was the strong demand of the emerging middle classes in Europe during nineteenth century?

Name the writer who wrote the book „The History of the Loss of Vietnam.‟

What do you understand by „Epistolary‟?

Ans: Epistolary – Written in the form of a series of letters.

7 Who brought printing to Europe? What was „vellum‟? „The production of handwritten manuscripts could not satisfy the ever-increasing demand for books‟. Why? Explain any one reason.

B. Vellum – A parchment made from the skin of animals

1. Copying was an expensive, laborious and time-consuming business.

2. Manuscripts were fragile, awkward to handle, and could not be carried around or read easily.

Name any one woman novelists? „Women and world of novel‟. Explain with examples.

A. Jane Austin, Charlotte Bronte or George Eliot (Any 2)

1. The most exciting element of the novel was the involvement of women. The eighteenth century saw the middle classes become more prosperous.

2. Women got more leisure to read as well as write novels. And novels began exploring the world of women – their emotions and identities, their experiences and problems.

3. Many novels were about domestic life. Examples. Jane Austen‟s Pride and Prejudice

8 Why was Frankfurt National assembly convened? Why did it fail?

1. On 18 May 1848, from the German regions a large number of political associations whose members were middle-class professionals, businessmen and prosperous artisans came
together in the city of Frankfurt and decided to vote for an all-German National
Assembly.

2. When the deputies offered the crown on these terms to Friedrich Wilhelm IV, King of Prussia, he rejected it and joined other monarchs to oppose the elected assembly. While the opposition of the aristocracy and military became stronger, the social basis of parliament eroded. The parliament was dominated by the middle classes who resisted the demands of workers and artisans and consequently lost their support. In the end troops were called in and the assembly was forced to disband. (1Mark)

How did Paul Bernard argue in favour of economic development of Vietnam? Explain.

Ans: 1. Some like Paul Bernard, an influential writer and policy-maker, strongly believed that the economy of the colonies needed to be developed. He argued that the purpose of acquiring colonies was to make profits.

2. If the economy was developed and the standard of living of the people improved, they would buy more goods. The market would consequently expand, leading to better profits for French business.

3. Bernard suggested that there were several barriers to economic growth in Vietnam: high population levels, low agricultural productivity and extensive indebtedness amongst the peasants.

9 “Some people conclude that politics and social divisions should not be allowed to mix.” Support this idea with two arguments.

1. At first sight, it would appear that the combination of politics and social divisions is very dangerous and explosive.

3. If they start competing in terms of some existing social divisions, it can make social divisions into political divisions and lead to conflict, violence or even disintegration of a
country. This has happened in many countries.

10 Assess the Centre- State relations before and after 1990.

Ans: 1. For a long time, the same party ruled both at the Centre and in most of the States. In those days, the Central Government would often misuse the Constitution to dismiss the State governments that were controlled by rival parties. This undermined the spirit of federalism.

2. All this changed significantly after 1990. This period saw the rise of regional political parties in many States of the country. This was also the beginning of the era of COALITION GOVERNMENTS at the Centre.

3. Since no single party got a clear majority in the Lok Sabha, the major national parties had to enter into an alliance with many parties including several regional parties to form a
government at the Centre. 4. It led to a new culture of power sharing and respect for the autonomy of State Governments. This trend was supported by a major judgment of the Supreme Court that made it difficult for the Central Government to dismiss state governments in an arbitrary manner. (Assessed as a whole answer)

11 What is „transparency‟-How has this mechanism contributed to hold the Government accountable in democracy?

Ans: 1. If a citizen wants to know if a decision was taken through the correct procedures can find this out. She has the right and the means to examine the process of decision making. This is known as transparency.

2. When we are trying to find out the outcomes of democracy, it is right to expect democracy to produce a government that follows procedures and is accountable to the people

4. If we wanted to measure democracies on the basis of this expected outcome, you would look for the following practices and institutions: regular, free and fair elections; open public debate on major policies and legislations; and citizens‟ right to information about the government and its functioning. (Any other relevant point)

12 What is the main criterion used by the World Bank in classifying different countries?

What are the limitations of this criterion?

2. While „averages‟ are useful for comparison, they also hide disparities.

3. Money in your pocket cannot buy everything

(Explain with examples) (Any other relevant points)

13 Why is the tertiary sector becoming so important in India? Explain any three reasons.

Ans: 1. In any country several services such as hospitals, educational institutions, post and telegraph services, police stations, courts, village administrative offices, municipal
corporations, defence, transport, banks, insurance companies, etc. are required. These can be considered as basic services. In a developing country the government has to take
responsibility for the provision of these services.

3. Greater the development of the primary and secondary sectors more would be the demand for such services.

5. Over the past decade or so, certain new services such as those based on information and communication technology have become important and essential. The production of these services has been rising rapidly. (Any three explained)

14 Write a brief account on WTO in the Globalization process.

Ans: 1. World Trade Organization (WTO) is one such organisation whose aim is to liberalise international trade. Started at the initiative of the developed countries, WTO establishes rules regarding international trade, and sees that these rules are obeyed.

15 What precautions do you suggest for consumer to take while purchasing medicines from the market?

1. When we buy medicines, on the packets, you might find „directions for proper use‟ and information relating to side effects and risks associated with usage of that medicine.

3. Date of Manufacturing and expiry.

16 Describe the vital and positive role of credit with examples.

“Cheap and affordable credit is crucial for the country‟s development.” Support your answer with specific reasons. Same as Set A-Q-25

17 “All over the world, people express their dissatisfaction with the failure of political parties to perform their functions well.” Analyse the statement with arguments.

What was the main objective of starting BSP as a National Party? Discuss the main features of National and State Parties. Answer for both questions remains the same as Q-24

18 Why in India a third tier of administration introduced? Examine the structure of Rural Panchayathi Raj system.

19 „Mass production became an important feature of the US economy and industrial production started by late nineteenth century‟. Who was responsible for this change? Explain briefly about his contributions towards US economy.

„In the twentieth century, handloom cloth production expanded steadily almost trebling between 1900 and 1940‟. Explain how did it happen?

“Bombay films have contributed in a big way to produce an image of the city as a blend of dream and reality, of slums and star bungalows”. Justify.

Answer same for all three questions as Set-B-Q-20

20 How had Non-Cooperation Movement spread to countryside? Explain.

Why did Gandhiji decide to re-launch a nationwide Satyagraha against the proposed Rowlatt Act 1919? How was it organized? Explain.

Answer remains the same as Set A- Q-20

21 Locate and label the place in the given outline political map of India:

The place where the Indian National Congress session demanded „Poorna Swarj‟ in 1929.

22 Locate and label the place in the given outline political map of India:

The place where Mahatma Gandhi called off Non Cooperation Movement in 1922. 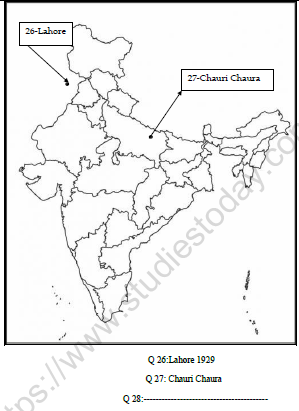