English
Download PDF
Read and download free pdf of CBSE Class 7 English Paragraph Writing Worksheet. Students and teachers of Class 7 English can get free printable Worksheets for Class 7 English in PDF format prepared as per the latest syllabus and examination pattern in your schools. Standard 7 students should practice questions and answers given here for English in Grade 7 which will help them to improve your knowledge of all important chapters and its topics. Students should also download free pdf of Class 7 English Worksheets prepared by school teachers as per the latest NCERT, CBSE, KVS books and syllabus issued this academic year and solve important problems provided here with solutions on daily basis to get more score in school exams and tests

Class 7 English students should refer to the following printable worksheet in Pdf for Paragraph Writing in standard 7. This test paper with questions and answers for Grade 7 English will be very useful for exams and help you to score good marks

Notes :
An analytical paragraph is a form of descriptive writing which is written on the basis of a given chart, graph, data, outline, clues, table etc. It requires analysis and comparison of the given facts and drawing conclusion based on the given data. When writing an analytical paragraph, one should remember to describe the facts in the best possible manner and cover the information provided. The paragraph must use clear and crisp language along with providing complete details of the data provided in the question.

Features of an Analytical Paragraph:
• It describes the given chart, table, data, graph, cues etc.
• It should be brief and comprehensive but at the same time, include complete information.
• It should state the facts that are provided.
• It should have simple and accurate language.
• It should mention figures and quantities appropriately.
• It should use the same tense throughout, as far as possible.
• It should not provide any personal observation or response.
• It should preferably use the passive form of the verb.

Format of an Analytical Paragraph Content in 100-120 words
The content of the paragraph must include the following:
• Introduction (explain in one or two lines the context or what is clearly evident from the chart or graph)
• Body of the paragraph (explain in detail the figure and trends, making comparisons and contrasts)
• Conclusion (give the overall view or summary of the chart or graph)

Points to Remember
• We must not include any personal opinions, conclusions or observations but simply stick to the facts.
• We must choose wisely the important information, organize it well, state the correct facts and summarize it properly.
• For introduction, we can start with phrases such asThe chart given above describes…/The given table suggests…/ The line graph shows…/ The data given provides information about…/ The pie chart illustrates…, etc.
• For body of the paragraph, we should organize the information well. We should look for the large differences that are very prominent. We can mention the aspect which is the smallest or the largest in the data given. Any aspect that is similar should be mentioned next. We should further mention about the aspect that has remained unchanged or is constant throughout.
• If the chart or table mentions two different groups, we should refer to both of them in the paragraph. If there is any contrast or comparison that could be drawn, we must present it effectively. If the chart is about a particular time period or highlights trends of several years, we should mention about each year in a concise manner. If any comparison or contrast can be made for two or more years, we should write about that too.
• For describing the pattern of growth, we can use words and phrases like- rapidly doubled‘, skyrocketed‘,striking increase‘, peaked‘, soared‘, declined‘, plummeted‘, leveled off‘, stagnated‘, fluctuating‘ ,starting to rise‘, starting to fall‘, drop down‘, slightly‘, etc.
• Mentioning quantities: When including numbers and figures, the accuracy must be ensured. Quantities can be described in a number of ways, such as percentage, fraction, ratios etc. For describing quantities, we can also use words and phrases like one-third of‘, nearly one-fourth of‘, majority‘, on an average‘, twice as much‘, almost equal‘, the highest‘, the lowest‘, approximately‘, etc.
• For establishing relationship or contrast, we can make use of words and phrases like- similarly‘, in contrast with‘, in comparison to‘, however‘, whereas‘, as opposed to‘, while‘, a striking difference‘, a noticeable difference‘, etc.
• For conclusion, we may use words and phrases like overall‘, subsequently‘, in all‘, in a nutshell‘, in short‘, therefore‘, etc.

Question. The given line graph provides information about changes in birth and death rates in New Zealand between 1901 and 2101. Write an analytical paragraph summarizing the information and make comparisons where relevant in about 100-120 words. 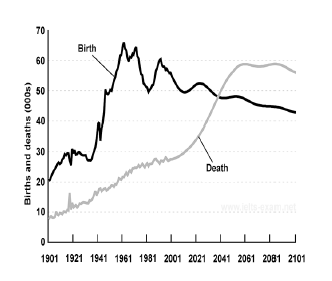 Answer. The graph shows changes in the birth and death rates in New Zealand since 1901 and forecasts trends till 2101.Between 1901 and 2041, the birth rate has been consistently higher than the death rate. It stood at 20000 in 1901, at the start of this period and started increasing gradually after that. It reached to its peak of around 65000 in 1961. Since then, the birth rate has fluctuated between 50000 and 60000. It is expected to decline in the coming years, reaching approximately 42000 by 2101.In contrast, the death rate stood at around 10000 in 1901 and has increased steadily after that. It is expected to rise strikingly from 2021 before levelling off to approximately 60000 between 2061 and 2081. The graph indicates a slight decline in deaths in the year 2101.The graph shows a huge gap between birth rate and death rate from 1961 to 2001. However, this gap is expected to reduce in the later years. Overall, as opposed to the prevailing trends, the death rate will be reversed and will be more than the birth rate in the later part of this century.

Question. The given chart shows the division of household tasks by gender in Great Britain. Write an analytical paragraph describing the chart in not more than 100-120 words. 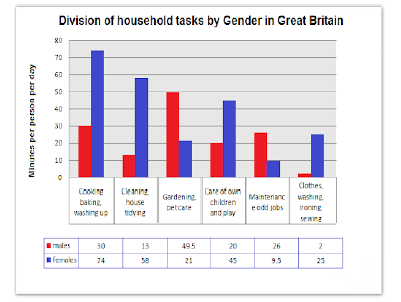 Answer. The chart provides information about the division of household tasks by gender in Great Britain and the number of minutes per day spent by both males as well as females in doing various tasks. On an average, women spend approximately four hours doing the household tasks, whereas men spend less than two and half hours for the same. The tasks on which women spend more time than men include cooking, cleaning the house, taking care of the children and laundry. In doing all these tasks, women spend approximately 200 minutes which is almost three times the time spent by men in accomplishing these tasks. On the other hand, men spend twice the time than women in doing tasks like gardening and maintenance of odd jobs in the house. Men spend majority of their time, almost 50 minutes, in gardening and pet care whereas women spend only 30 minutes for these tasks. The time spent by men in washing, ironing and sewing clothes is as low as 2 minutes per day as opposed to 25 minutes spent by women. In a nutshell, women spend far more time when it comes to doing household chores than men who prefer to do gardening, pet care and maintenance of odd jobs.

Question. The given pie chart shows proportion of people from different households living in a state of poverty in the UK in the year 2002. Write an analytical paragraph based upon the information provided in about 100-120 words 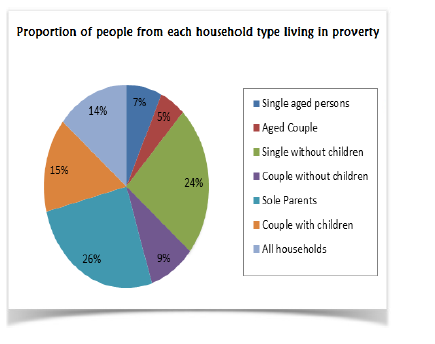 Answer. The given pie chart illustrates seven different categories of households living in poverty in the UK in the year 2002. It is clearly evident from the pie chart that 26% of the total povertystricken households were those of sole parents who formed the majority. Single people without children accounted for the second highest proportion of 24%. In contrast to couples without children who accounted for just 9%, couples with children accounted for 15% of the poor households. Single aged persons formed 7%, whereas aged couples formed 5% of poor households. Overall, 14% of all households in the UK were living under poverty in the year 2002. In all, the younger generation seemed to have a greater poor percentage than their aged counterparts and couples without children had better economic conditions than those with children.

Question. The following table shows details about the different internet activities for six categories of people according to different age groups. Study the table and write an analytical paragraph based upon it in about 100- 120 words. 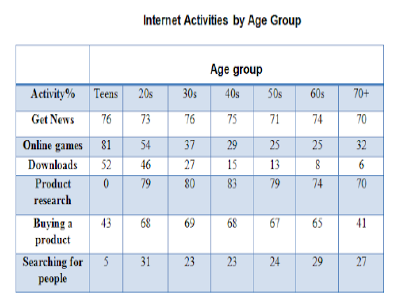 Answer. The given table suggests the internet activities of six age groups ranging from teens to those in their seventies for six different kinds of activities on the internet. The table shows that the younger generation is more interested in online games and news, whereas the older generation spends time on the internet in order to research and buy products. It is evident from the table that 81% of the teens mainly use the internet for playing online games, and many are also interested in news and downloads as well as in buying products.

Recently you travelled by the Metro with your family. Write a paragraph in about 80-100 words on the topic ‘A Journey by the Metro ‘ . Use the following hint points and your own too.