Learning Objectives:-
The learner will be able to,
• Learn the Ultra structure of Chloroplast .
• Realise the importance of solar energy and properties of light.
• Acquire knowledge of Quantum, Quantum yield and Quantum requirement.
• Develop curiosity for photosynthetic experiments like Red drop, Emerson Enhancement effect and Hill’s Reaction.
• Analyse the pathway of electron- PS I and PS II.
• Recognise the Photo-Oxidative and Photo Chemical Pathway.
• Develop skill in Photosynthetic pathways and ability to draw C3, C4, C2 and CAM cycle.
Chapter Outline
13.1 Historical events in photosynthesis
13.2 Definition, Significance and Site of photosynthesis
13.3 Photosynthetic pigments
13.4 Spectrum of electromagnetic radiation
13.5 Photosynthetic unit
13.6 Absorption spectrum and Action spectrum
13.7 Emerson’s experiments & Hill’s reaction
13.8 Modern concept of photosynthesis
13.9 Photo-oxidation phase of light reaction
13.10 Photochemical phase of light reaction
13.11 Photophosphorylation
13.12 Chemiosmotic theory
13.13 Dark reaction or C3 cycle
13.14 Hatch & Slack Pathway or C4 Cycle
13.15 CAM cycle or Crassulacean Acid Metabolism
13.16 Photorespiration or C2 Cycle
13.17 Factors affecting photosynthesis
13.18 Photosynthesis in bacteria
Life on earth is made up of organic compounds. How do we get these organic compounds? Ultimately, plants are the main source of all kinds of carbon compounds in this planet. We directly or indirectly depend on plants for this. Plants are the major machinery which produce organic compounds like carbohydrates, lipids, proteins, nucleic acids and other biomolecules.
Though man has reached the glory of achievements still he is not able to imitate the metabolic activities of plants which produces energy resources and other biomolecules. 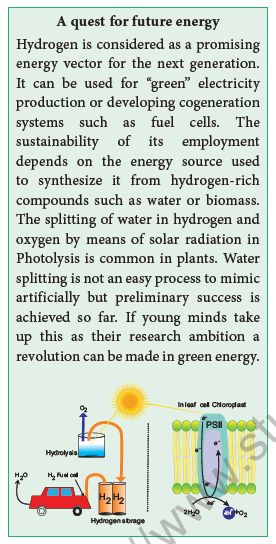 The plants get energy from sun by converting solar or radiant energy into chemical energy by the process of Photosynthesis, which acts as a driving force for both biotic and abiotic world. Photosynthesis produces 1700 million tonnes of dry matter per year by fixing 75 × 1012 Kg of carbon every year. Photosynthetic organisms use only 0.2 % of incident solar light on earth. Carbohydrates produced by photosynthesis are the basic raw material for respiration and also to produce many organic compounds. It maintains atmospheric oxygen and carbon dioxide level. Photosynthesis consumes atmospheric carbon dioxide which is continuously added by the respiration of organisms. Photosynthesis is the major
endergonic reaction. In this chapter, we will study about the energy yielding process of photosynthesis and various types of energy utilization processes to produce carbohydrates.
13.1 Historical Events in Photosynthesis
• Van Helmont (1648) – Increase in organic substances comes from water alone by growing a Willow tree that gains weight but soil loses only 2 ounces of the original weight.
• Stephen Hales (1727) – Father of Plant Physiology, Plants obtain nourishment from air and light.
• Joseph Priestley (1772) – Performed experiments with candle, mice and Mint plant and concluded that vegetation purifies the air.
• Jean-Ingen-Housz (1779) – Confirmed Priestley’s experiment that oxygen released by the plants is possible only in light.
• Lavoisier (1783) – Purifying gas produced by plants in sunlight is Oxygen (Phlogiston) and noxious gas produced by burning of candle (de Phlogiston) is Carbon di oxide.
• Desaussure (1804)- Explained the importance of water in the process of photosynthesis.
• Dutrochet (1837) – Explained the importance of Chlorophyll in Photosynthesis.
• Von Mayer (1845) – Green plants convert solar energy into chemical energy of organic matter. CO2+ H2O Organic matter + O2
• Liebig (1845) – Organic matter of plants was derived from CO2.
• Julius Von Sachs (1854) – Discovered that product of photosynthesis was starch.Green substance (chlorophyll) is located in special structures (Chloroplast).
• T.W. Engelmann (1888)- Plotted action spectrum of photosynthesis
• Blackman (1905) – Proposed Law of Limiting factors.
• Warburg (1920) – Used unicellular green algae Chlorella for the study of Photosynthesis.
• Van Neil (1931) – Oxygen released during photolysis comes from water and not from CO2. He also conducted experiments in Purple green bacteria and demonstrated Photosynthesis.
Light
2H2A + CO2        →            (CH2O)n+H2O+ 2A
chlorophyll
In Green Sulphur bacteria H2S is the Hydrogen donor which releases Sulphur instead of oxygen.
• Emerson and Arnold (1932) – Existence of light and dark reaction by flashing light experiments.
• R. Hill (1937) – Explained photolysis with the help of isolated chloroplasts and electron acceptors in the presence of light.
• Ruben and Kamen (1941) – Used 18O radioactive Oxygen to prove that oxygen evolves from water.
• Arnon, Allen and Whatley (1954) – Used radioactive 14CO2 to show fixation of CO2 by isolated chloroplast.
• Melvin Calvin (1954) – Used radioactive 14CO2 and traced path of carbon in the dark phase of photosynthesis or C3 Cycle.
• Emerson et al., (1957) – Reported existence of two photosystems
• Hatch and Slack (1965) – Reported C4 pathway and CO2 fixation in C4 plants
• Huber, Michel and Dissenhofer (1985) – Crystalized photosynthetic reaction centre of Rhodobacter and received the Nobel Prize in 1988.
13.2 Definition, Significance and Site of Photosynthesis
13.2.1 Definition of Photosynthesis
Photosynthesis is referred as photochemical oxidation and reduction reactions carried out with help of light, converting solar energy into Chemical energy. It is the most important anabolic process. Plants and photosynthetic bacteria use simple raw materials like carbon dioxide water and with the help of light energy synthesize carbohydrates and evolve oxygen. The overall chemical equation for photosynthesis is:
Light
6CO2 + 6H2O       →         C6H12O6 + 6O2↑
Chlorophyll
Ruben and Kamen (1941) demonstrated six molecules of water as insufficient for the evolution of 6 molecules of O2 and modified the equation as:
Light
6CO2 + 12H2O     →     C6H12O6 + 6 H2O + 6O2↑
Chlorophyll
Photosynthesis is a collection of oxidation and reduction reactions (Redox reaction).
Oxidation- Water is oxidised into oxygen (loss of electrons).
Reduction – CO2 is reduced into Carbohydrates (gain of electrons).In some bacteria, oxygen is not evolved and is called as non-oxygenic and anaerobic photosynthesis. Examples:Green sulphur, Purple sulphur and green filamentous bacteria.
13.2.2 Significance of Photosynthesis
1. Photosynthetic organisms provide food for all living organisms on earth either directly or indirectly.
2. It is the only natural process that liberates oxygen in the atmosphere and balances the oxygen level.
3. Photosynthesis balances the oxygen and carbon cycle in nature.
4. Fuels such as coal, petroleum and other fossil fuels are from preserved photosynthetic plants.
5. Photosynthetic organisms are the primary producers on which all consumers depend for energy.
6. Plants provide fodder, fibre, fire wood, timber, useful medicinal products and these sources come by the act of photosynthesis