4. Acetogenic bacteria: This group of bacteria oxidize H2 by reducing CO2 to acetic acid. Which is then used up by the methanogens to generate methane. 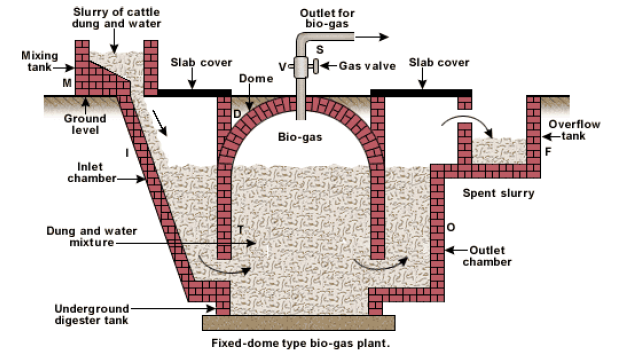 When 10-30% acetic acid content is achieved, the liquid is filtered. The filtrate is allowed to ripen till the disagreeable smell disappears. It is pastured and called vinegar. The acid is concentrated and vinegar is used as souring agent, preservative and condiment. Acetic acid is used in plastics, pharmaceuticals, colouring agents, insecticides, production of solvents and flavoring agent.
(ii) Citric acid: Aspergillus niger, Mucor species can ferment sugar to produce citric acid. Citric acid is preservative and flavoring agent. It is also used in medicines, engraving, dyeing and inks
(iii) Lactic acid: First organic acid is to be fermented, lactic acid is obtained by activity of bacteria like streptococcus lacti, fungus Rhizopus etc. Over a variety of nutrient media like hydrolysed corn or potato starch, molassess, sulphates liquor etc. Lactic acid is used in cleansing, flavoring, preserving pickles, curing of meat. It is used as mordant in tanning, dyeing, printing of wool and preparation of plastics
(iv) Other organic preparations:
(a) Gallic acid is obtained with the help of Aspergillus niger. It is employed in ink making.
(b) Gluconic acid is manufactured through the agency of Penicillium purpurogenum, for use as calcium gluconate (providing calcium to infants, lactating mother and treating milk fever in high milk yield cows and in preparation of pharmaceuticals
(c) Butyric acid is formed by activity of Clostridium butyricum. It is the acid that occurs in rancid butter
3. Enzymes
(i) Pectinase: They are obtained from fungi grown on pectin containing media. Eg. Aspergillus niger, Pectinases are used in enhancing juice extraction from fruits, cleansing of fruit juice, removing bitterness retting of fibres and fermentation of green coffee
(ii) Proteases: They are obtained from both bacteria (e.g. Bacillus subtilis, B. lichenformis) and fungi ( e.g. Aspergillus oryzae). Proteases are used in enhancing tenderness of meat, extraction of fish liver oil, clarification and chill proofing of alcoholic drinks, synthesis of glue, cleaning of hides and in detergents for removing protein based strains
(iii) Lipase they are lipid digestive enzymes that are obtained by growing Candida lipolytica, Aspergillus niger etc lipases are used in flavouring cheese, hydrolyzing oils for soap manufacture and in detergent formulations for removing fat based stains
(iv) Amylases they are starch digesting enzymes which are obtained from Aspergillus oryzae, B. diastaticus etc. The enzymes are used in softening and sweetening of bread, desizing fibres, cleansing starch related stains, clearing starch related stains in utensils and clothes
(v) Streptokinase: It is also called tissue plasminogen activator or TPA which is obtained from haemolytic streptococcus species and modified genetically to be useful in human beings. It is used as clot buster or dissolving blood clots in vessels of patients having undergo mycocardinal infaction or heart attack
4. Cyclosporin A
It is an 11=membered cyclic oligo-peptide. It is obtained from fungus Trichoderma polysporum or Tolypocladium inflatum cyclosporin A has immunosuppressive property as it inhibits activation of T-cell response to transplanted organ
5. Statins
They are inhibitor of enzyme HmG can reductase of liver which forms mevalonate required for cholesterol synthesis. Statin are synthesised by activity of yeast Monascus purpureus
6. Vitamins
(i) Vitamin C: Acetobacter is helpful in dehydrogenation of D-sorbital and its conversion to L-sorbose. Which is precursor of vitamin –C or L-ascorbic acid
(ii) Vitmin B12 : Organism like Propionibacterium frendeureichii, Streptomyces oliaceus are used on nutrient medium made of starch, corn syrup or molasses. The cells are harvested and autolysed to separate the vitamin.