Class 11 Chemistry students should refer to the following concepts and notes for Structure Of Atom in standard 11. These exam notes for Grade 11 Chemistry will be very useful for upcoming class tests and examinations and help you to score good marks

2.   J. J. Thomson, in 1898, proposed that an atom possesses a spherical shape (radius approximately 10–10 m) in which the positive charge is uniformly distributed. The electrons are embedded into it in such a manner as to give the most stable electrostatic arrangement (Fig. 2.4, NCERT Page 5). Many different names are given to this model, for example, plum pudding, raisin pudding or watermelon.

a)   Most of the space in the atom is empty as most of the a–particles passed through the foil undeflected.

c)  Calculations by Rutherford showed that the volume occupied by the nucleus is negligibly small as compared to the total volume of the atom. The radius of the atom is about 10–10m, while that of nucleus is 10–15m.

d)  On the basis of above observations and conclusions, Rutherford proposed the nuclear model of atom (after the discovery of protons). According to this model :(i) The positive charge and most of the mass of the atom was densely concentrated in extremely small region. This very small portion of the atom was called nucleus by Rutherford. (ii) The nucleus is surrounded by electrons that move around the nucleus with a very high speed in circular paths called orbits. Thus, Rutherford‘s model of atom resembles the solar system in which the nucleus plays the role of sun and the electrons that of revolving planets. (iii) Electrons and the nucleus are held together by electrostatic forces of attraction.

7.  Drawbacks of Rutherford Model According to the electromagnetic theory of Maxwell, charged particles when accelerated should emit electromagnetic radiation (This feature does not exist for planets since they are uncharged). Therefore, an electron in an orbit will emit radiation, the energy carried by radiation comes from electronic motion. The orbit will thus continue to shrink. Calculations show that it should take an electron only 10–8s to spiral into the nucleus. But this does not happen. Thus, the Rutherford model cannot explain the stability of an atom.

8.  The frequency (ν ), wavelength (λ) and velocity of light (c) are related by the equation (2.5). c = ν λ The other commonly used quantity specially in spectroscopy, is the wavenumber (ν-). It is

defined as the number of wavelengths per unit length. Its units are reciprocal of wavelength unit, i.e., m–1.

9.  H. Hertz performed a very interesting experiment in which electrons (or electric current) were  ejected when certain metals (for example potassium, rubidium, caesium etc.) were exposed to a beam of light . The phenomenon is called Photoelectric effect.  For photoelectric effect :  hv = hv+ 1/2 mv2

(i) The energy is radiated or absorbed by a body not continuously but discontinuously in form of small packets.

(ii)  Each packet is called quantum. In case of light, the quantum is called ‗photon‘.  The energy of quantum is directly proportional to the frequency (v) of the radiation.  E Χv  E =  hv,  Where ‘h’is Planck‘s constant. Its value is 6.625Χ1034Joule second.

11.  The spectrum of radiation emitted by a substance that has absorbed energy is called an emission spectrum. Atoms, molecules or ions that have absorbed radiation are said to be ―excited‖. To produce an emission spectrum, energy is supplied to a sample by heating it or irradiating it and the wavelength (or frequency) of the radiation emitted, as the sample gives up the absorbed energy, is recorded.

12. An absorption spectrum is like the photographic negative of an emission spectrum. A continuum of radiation is passed through a sample which absorbs radiation of certain wavelengths.
13. Line Spectrum of Hydrogen: When an electric discharge is passed through gaseous hydrogen, the H2 molecules dissociate and the energetically excited hydrogen atoms produced emit electromagnetic radiation of discrete frequencies. The hydrogen spectrum consists of several series of lines named after their discoverers.

could be described by the following expression :
14. Bohr’s Model For Hydrogen Atom
a) The electron in the hydrogen atom can move around the nucleus in a circular path of fixed radius and energy. These paths are called orbits, stationary states or allowed energy states. These orbits are arranged concentrically around the nucleus.
b) An electron can move only in those orbits for which its angular momentum is integral multiple of h/2Π that is why only certain fixed orbits are allowed.The angular momentum of an electron in a given stationary state can be expressed as in equation

15. Bohr‘s theory can also be applied to the ions containing only one electron, similar to that present in hydrogen atom. For example, He+ Li2+, Be3+ and so on. The energies of the stationary states associated with these kinds of ions (also known as hydrogen like species) are given by the

expression
16. Limitations of Bohr’s Model: It fails to account for the finer details (doublet, that is two closely spaced lines) of the hydrogen atom spectrum observed by using sophisticated spectroscopic techniques. This model is also unable to explain the spectrum of atoms other than hydrogen, for example, helium atom which possesses only two electrons. Further, Bohr‘s theory was also unable to explain the splitting of spectral lines in the presence of magnetic field (Zeeman effect) or an electric field (Stark effect).
17. Dual Behaviour of Matter: The French physicist, de Broglie in 1924 proposed that matter, like radiation, should also exhibit dual behaviour i.e., both particle and wavelike properties.
18. The de Broglie relation. :de Broglie relation state that the wavelength associated with a moving object or an electron is inversely proportional to the momentum of the particle.

20. Orbital. It is a region or space where there is maximum probability of getting electron.
21. Quantum numbers. They are used to get complete information about electron, i.e., location, energy, spin, etc. These quantum numbers also help to designate the electron present in an orbital.
22. Principal quantum number. It specifies the location and energy of an electron. It is measure of the effective volume of the electron cloud. It is denoted by 'n‘. Its possible values are 1, 2, 3,4 …..
23. Angular momentum quantum number. It is also called 'azimuthal quantum number‘. It determines the shape of the orbital. It is denoted by 'l‘. The permitted values of 'l‘ are 0, 1, 2, etc., upto n–1. For a given value of n, l = 0 to n – 1 '. e.g., if value of n is 4, l can have values

24. Magnetic quantum number. It is denoted by 'm‘ and its value depends on value of '‘ since magnetism is due to angular momentum. It determines the magnetic orientation of an orbital, i.e., the direction of orbital relative to magnetic field in which it is placed. Its permitted values are - l to + l including zero, e.g., when l = 1, then m = -1, 0, +1. It has total number of values equal to 2l + 1.
25. Spin quantum number. It indicates, the direction in which electron revolves. Spin is magnetic property and is also quantized. It has two permitted values + ½ or – ½. The spin angular momentum of an electron is constant and cannot be changed.
26. (n+l) rule: The relative order of energies of various sub-shells in a multi-electron atom can be predicted with the help of (n+l) rule (also called Bohr-Bury rule)According to this rule a subshell with lower values of (n+l) has lower energy.In case two sub-shell has equal value of (n+l), the sub-shell with lower value of n has lower energy
27. Pauli’s Exclusion Principle. No two electrons in an atom can have all the four quantum numbers same. It can also be stated as – An orbital can have maximum two electrons and they must be of opposite spin quantum numbers.
28. Aufbau principle. Electrons are filled in the various orbitals in the increasing order of their energies, i.e., orbital having lowest energy will be filled first and the orbital having highest energy will be filled last.Increasing energy ofatomic orbitals for multi-electron atoms
1s < 2s < 2p < 3s <3p < 4s <3d < 4p <5s < 4d <5p < 6s < 4f < 5d < 6p < 7s
29. Hund’s rule of maximum multiplicity. No electron pairing takes place in p, d and f orbitals until each orbital in the given sub-shell contains one electron, e.g., N (7) has electronic configuration 1s2 2s2 1 1 1 2 2 2 x y z p p p according to Hund‘s rule and not 2 2 2 1 1 2 2 2 x y s s p p .
30. The valence electronic configurations of Cr and Cu, therefore, are 3d5 4s1 and 3d104s1 respectively and not 3d4 4s2 and 3d94s2. It has been found that there is extra stability(Stability of Completely Filled and Half Filled Subshells) associated with these electronic configurations.
31. Three orbitals of 2p subshell (2px, 2py, and 2pz orbitals). 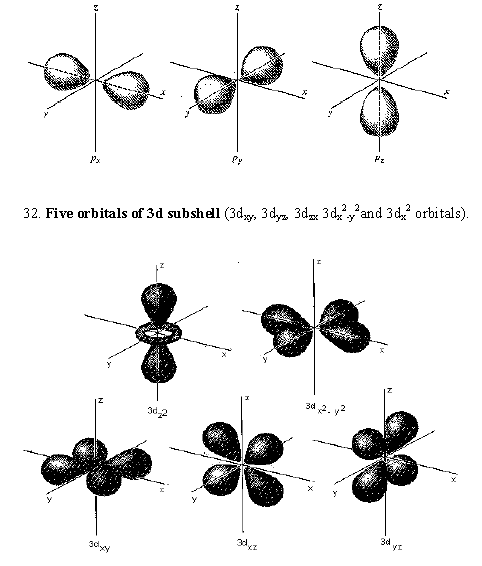