Class 11 Chemistry students should refer to the following concepts and notes for States Of Matter in standard 11. These exam notes for Grade 11 Chemistry will be very useful for upcoming class tests and examinations and help you to score good marks

1.  Intermolecular forces : are the forces of attraction and repulsion between interacting particles (atoms and molecules). This term does not include the electrostatic forces that exist between the two oppositely charged ions and the forces that hold atoms of a molecule together i.e., covalent bonds. Attractive intermolecular forces are known as van der Waals forces, in honour of Dutch scientist Johannes van der Waals (1837-1923). 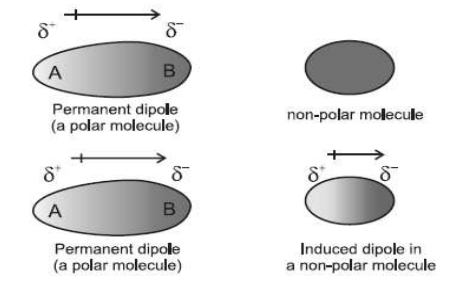 4.  Dispersion Forces or London Forces:Atoms and nonpolar molecules are electrically symmetrical and have no dipole moment because their electronic charge cloud is symmetrically distributed. But a dipole may develop momentarily even in such atoms and molecules. This can be understood as follows. Suppose we have two atoms ‗A‘ and ‗B‘ in the close vicinity of each other (Fig. 5.1a NCERT page 133). It may so happen that momentarily electronic charge distribution in one of the atoms, say ‗A‘, becomes unsymmetrical i.e., the charge cloud is more on one side than the other (Fig. 5.1 b and c NCERT page 133). This results in the development of instantaneous dipole on the atom ‗A‘ for a very short time. This instantaneous or transient dipole distorts the electron density of the other atom ‗B‘, which is close to it and as a consequence a dipole is induced in the atom ‗B‘. The temporary dipoles of atom ‗A‘ and ‗B‘ attract each other. Similarly temporary dipoles are induced in molecules also. This force of attraction was first proposed by the German physicist Fritz London, and for this reason force of attraction between two temporary dipoles is known as London force. Another name for this force is dispersion force.

5.  Hydrogen bond: Hydrogen bond is represented by a dotted line (– – –) while a solid line represents the covalent bond. Thus, hydrogen bond can be defined as the attractive force which binds hydrogen atom of one molecule with theelectronegative atom (F, O or N) of another molecule this is special case of dipole-dipole interaction..

6. Boyleís Law (Pressure – Volume Relationship): At constant temperature, the pressure of a fixed amount (i.e., number of moles n) of gas varies inversely with its volume. This is known as Boyleís law.

7. Charles Law (Temperature – Volume Relationship): It states that pressure remaining constant, the volume of a fixed mass of a gas is directly proportional to its absolute temperature.i.e. V ά T (at constant P & V)

8. Gay Lussacís Law (Pressure-Temperature Relationship): It states that at constant volume, pressure of a fixed amount of a gas varies directly with the temperature. Mathematically, . P ά T (at constant V & n)

14. Density and Molar Mass of a Gaseous Substance:M= P dRT

• Gases consist of large number of identical particles (atoms or molecules) that are so small and so far apart on the average that the actual volume of the molecules is negligible in comparison to the empty space between them. They are considered as point masses. This assumption explains the great compressibility of gases.explains the great compressibility of gases.

• There is no force of attraction between the particles of a gas at ordinary temperature and pressure. The support for this assumption comes from the fact that gases expand and occupy all the space available to them.

• Particles of a gas are always in constant and random motion. If the particles were at rest and occupied fixed positions, then a gas would have had a fixed shape which is not observed.

• Collisions of gas molecules are perfectly elastic. This means that total energy of molecules before and after the collision remains same. 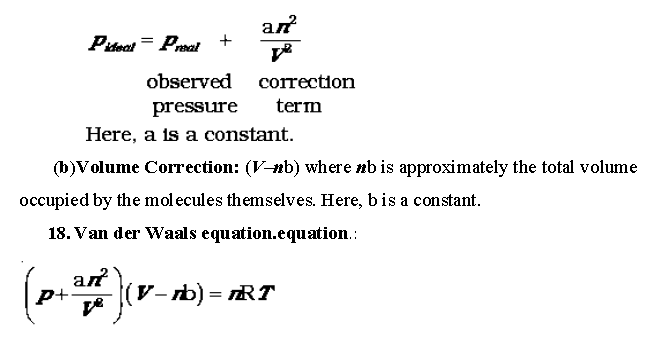 20. The deviation from ideal behaviour can be measured in terms of compressibility factor Z, which is the ratio of product pV and nRT. Mathematically Z= pV /nRT

21. The temperature at which a real gas obeys ideal gas law over an appreciable range of pressure is called Boyle temperature or Boyle point.