Class 11 Chemistry students should refer to the following concepts and notes for Classification Of Elements in standard 11. These exam notes for Grade 11 Chemistry will be very useful for upcoming class tests and examinations and help you to score good marks

CLASSIFICATION OF ELEMENTS AND PERIODICITY IN

Mendeleev’s Periodic Law:- The properties of the elements are the periodic function of their atomic masses.

Modern Periodic Law: The physical and chemical properties of elements are the periodic functions of their atomic numbers.

p- Block elements: They belongs to group- 13 to 18. The outer most electronic configuration is ns2 np1 -6. He (1s2) is a s- block element but is positioned

with the group 18 elements (ns2 np6) because it has completely filled valence shell and as a result, exhibits properties characteristic of other noble gases.

d- block elements (Transition elements) are the elements of group 3 to 12 having outer electronic configuration (n-1) d1-10 ns1-2. Four transition series are 3d, 4d, 5d and 6d. The 6d- series is incomplete. Atomic radius generally decreases across a period and increases as we descend the group.

1Noble Gases: The gaseous elements of group 18 are called noble gases. The general outermost electronic configuration of noble gases (except He) is ns2 np6.

He exceptionally has 1s2 configuration. Thus the outermost shell of noble gases is completely filled.

PERIODICITY: The repetition of similar properties after regular intervals is called periodicity.

Cause of Periodicity: The properties of elements are the periodic repetition of similar electronic configuration of elements as the atomic number increases.

ATOMIC RADIUS- The distance from the center of the nucleus to the outermost shell of the electrons in the atom of any element is called its atomic radius.

Periodicity- (a) In period- Atomic radius of elements decreases from left to right in a period.

(b) In Group- Atomic radius of elements increases on moving top to bottom in a group.

COVALENT RADIUS- Half the inter-nuclear distance between two similar atoms of any element which are covalently bonded to each other by a single covalent bond is called covalent radius.

VAN DER WAALS’ RADIUS: Half the inter-nuclear separation between two similar adjacent atoms belonging to the two neighbouring molecules of the same substance in the solid state is called the van der waals’radius of that atom.

METALLIC RADIUS: Half the distance between the nuclei of the two adjacent metal atoms in a close packed lattice of the metal is called its metallic radius. Van der Waals’radius > Metallic radius > Covalent radius

IONIC RADIUS: The effective distance from the centre of the nucleus of an ion upto which it has an influence on its electron cloud is called its ionic radius.
A cation is smaller but the anion is larger than the parent atom. In case of iso-electronic species, the cation with greater positive charge has smaller radius but anion with greater negative charge has the larger radii.

IONISATION ENTHALPY: The ionisation enthalpy is the molar enthalpy change accompanying the removal of an electron from a gaseous phase atom or ion in its ground state. Thus enthalpy change for the reaction; M(g)→ M+(g) + e- 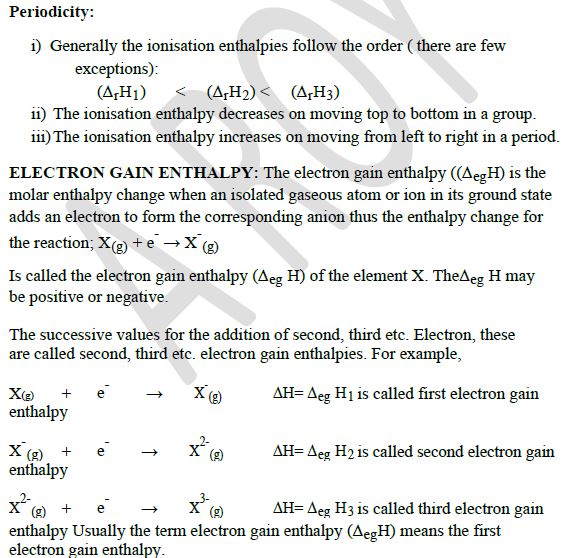 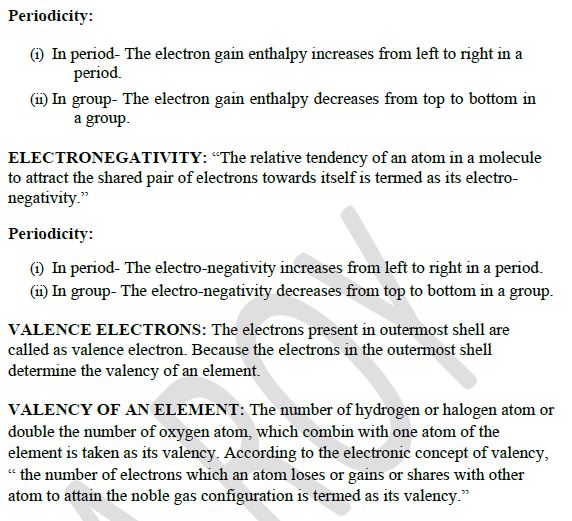