Class 11 Chemistry students should refer to the following concepts and notes for Chemistry in standard 11. These exam notes for Grade 11 Chemistry will be very useful for upcoming class tests and examinations and help you to score good marks

SOME BASIC CONCEPTS OF CHEMISTRY

Chemistry: Chemistry is the branch of science that deals with the composition, structure and properties of matter. Chemistry is called the science of atoms and molecule

•Organic Chemistry -This branch deals with study of carbon compounds especially hydrocarbons and their derivatives.

•Physical Chemistry-The explanation of fundamental principles governing various chemical phenomena is the main concern of this branch. It is basically concerned with laws and theories of the different branches of chemistry.

•Industrial Chemistry-The chemistry involved in industrial processes is studied under this branch.

•Analytical Chemistry-This branch deals with the qualitative and quantitative analysis of various substances.

•Biochemistry-This branch deals with the chemical changes going on in the bodies of living organisms; plants and animals.

Physical properties are those properties which can be measured or observed without changing the identity or the composition of the substance. E.g. colour, odour, melting point, boiling point, density etc.

The measurement or observation of chemical properties requires a chemical change to occur. e.g. Burning of Mg-ribbon in air

Chemical properties are characteristic reactions of different substances; these include acidity or basicity, combustibility etc.Many properties of matter such as length, area, volume, etc., are quantitative in nature.

Metric System was based on the decimal system.

The International System of Units (SI)

The International System of Units (in French Le Systeme International d’Unites– abbreviated as SI) was established by the 11th General Conference on Weights and Measures (CGPM from ConferenceGenerale des Poids at Measures). The SI system has seven base units. 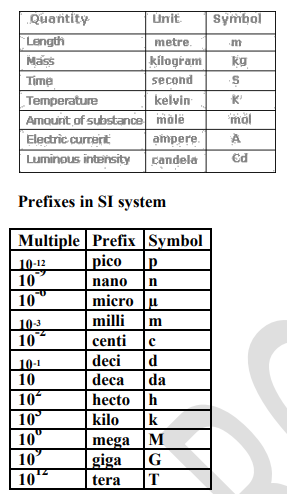 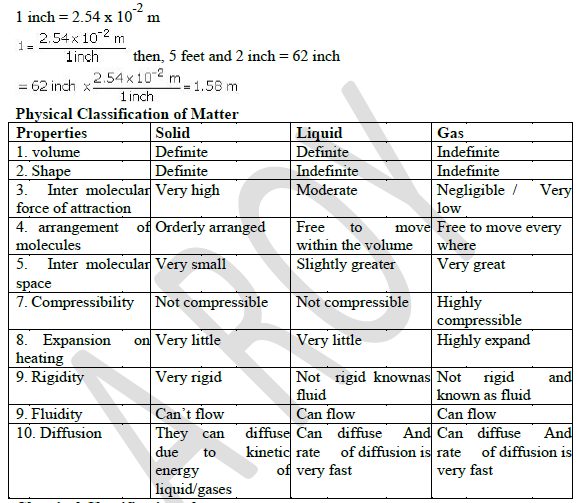 Elements
An element is the simplest form of matter that cannot be split into simpler substances or built from simpler substances by any ordinary chemical or physical method. There are 114 elements known to us, out of which 92 are naturally occurring while the rest have been prepared artificially.
Elements are further classified into metals, non-metals and metalloids.
Compounds
A compound is a pure substance made up of two or more elements combined in a definite proportion by mass, which could be split by suitable chemical methods.
Characteristics of compound
• Compounds always contain a definite proportion of the same elements by mass.
• The properties of compounds are totally different from the elements from which they are formed.
• Compounds are homogeneous.
• Compounds are broadly classified into inorganic and organic compounds. Inorganic compounds are those, which areobtained from non-living sources such as minerals. For example, common salt, marble and limestone. Organiccompounds are those, which occur in living sources such as plants and animals. They all contain carbon. Commonorganic compounds are oils, wax, fats etc.
Mixtures
A mixture is a combination of two or more elements or compounds in any proportion so that the components do not lose their identity. Air is an example of a mixture Mixtures are of two types, homogeneous and heterogeneous.
Homogeneous mixtures have the same composition throughout the sample. The components of such mixtures cannot be seen under a powerful microscope. They are also called solutions. Examples of homogeneous mixtures are air, seawater, gasoline, brass etc.
Heterogeneous mixtures consist of two or more parts (phases), which have different compositions. These mixtures have visible boundaries of separation between the different constituents and can be seen with the naked eye e.g., sand and salt, chalk powder in water etc.

Please click the link below to download pdf file for CBSE Class 11 Chemistry Some Basic Concepts of Chemistry.