Class 11 Chemistry students should refer to the following concepts and notes for Hydrogen in standard 11. These exam notes for Grade 11 Chemistry will be very useful for upcoming class tests and examinations and help you to score good marks

1. Hydrogen is the lightest element known since it has an atomic mass of 1.0079

2. Hydrogen resembles Group 1 elements because it has electronic configuration (1s1) similar to alkali metals and can loose one electron to form unipositive ions

5. In elemental form Hydrogen exists as a diatomic molecule H2 and is called dihydrogen

7. The production of dihydrogen can be increased by reacting carbon monoxide of syngas mixtures with steam in the presence of iron chromate as catalyst. This reaction is called as water gas shift reaction

8. The process of producing 'syngas' from coal is called 'coal gasification'

10.The binary compounds of hydrogen with other elements are calledhydrides

12. Covalent or molecular hydrides are binary compounds of hydrogenwith elements of comparatively high electronegativity such as p-block elements

• Electron rich hydrides have excess electrons than required to formnormal covalent bonds. Excess electrons are present as lone pairs .Examples of this are hydrides of group 15, 16 and 17 such as ammonia, water etc.

• Electron deficient hydrides do not have sufficient number of electronsto form normal covalent bonds. Examples of this are hydrides of group 13

14.Metallic hydrides or Interstitial hydrides are the compounds ofhydrogen with transition metals of group 3,4,5 of d-block, Cr metal of group 6, f-block element

15.Since the composition of metallic hydrides does not correspond tosimple whole number ratio they are also called non-stoichiometric hydrides

16. Due to high polarity, water dissolves most of the polar substances

17.Due to hydrogen bonding water has high boiling point and high heatof vaporization

18.Density of water is more than that of ice

20. Water is amphoteric in nature because it has the ability to act as anacid as well as base

21.Autoprotolysis or self ionization of water: One water molecule acts as an acid by donating a proton to another water molecule which acts as a base. This is also called autoprotolyis of water

22.Water free from soluble salts of calcium and magnesium is called soft water

25.Permanent hardness in water is due to soluble salts of chlorides and sulphates of calcium and magnesium 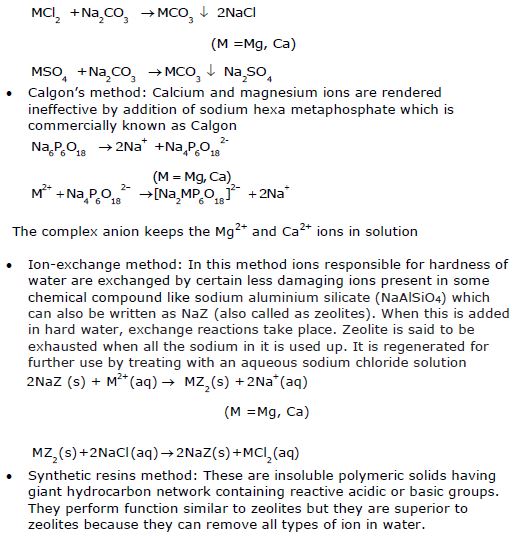