Class 12 Biology students should refer to the following concepts and notes for Principles Of Inheritance And Variations Study Guide in standard 12. These exam notes for Grade 12 Biology will be very useful for upcoming class tests and examinations and help you to score good marks 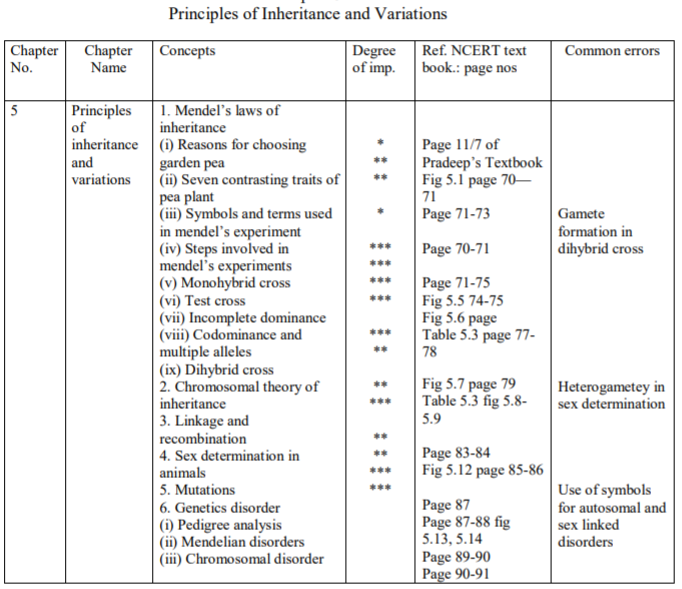 ANEUPLOIDY :- The phenomenon of gain or loss of one or more chromosome.

AUTOSOMES :- All the chromosomes of an individual that are not involved in the determination of sex.

BACK CROSS:- When F1 progeny /heterozygous is crossed with either of the plant.

CO DOMINANCE :- When two alleles of a gene are equally dominant & express themselves in the presence of other.

DIHYBRID :- The individual that is heterozygous for the alleles controlling two characters.

DIHYBRID CROSS :- A cross made between individuals of a species considering the inheritance of contrasting pair of two traits.

DOMINANT ALLELE :- Allele that express itself in a hybrid/heterozygous condition.

EMASCULATION :- Removal of anthers from the bisexual flower before maturation of pollen grains.

GENETICS :-The branch of science that deals with inheritance & variations.

GENOTYPE :-The genetic constitution of an organism.

HEREDITY ;-The process of transmission of characters from one generation to another generation/parent to offspring.

HETROZYGOUS :- Organism having dissimilar pair of allele for a character.

HOMOZYGOUS :- Organism having similar pair of allele for a character.

INCOMPLETE DOMINANCE :- When neither of two alleles of a gene is completely dominant over the other giving an intermediate character.

LINKAGE:- The phenomenon where two or more linked genes are always inherited together/tendency of a gene (located on same chromosome) to move together into gametes.

LINKED GENES-All the genes present on a chromosome.

MONOHYBRID :- The individual that is heterozygous for the alleles controlling one character.

MONOHYBRID CROSS :- Cross made between two individuals of a species considering the inheritance of the contrasting pair of a single character.

MONOSOMY :- The condition where a particular chromosome is present in a single copy in a diploid cell.

MULTIPLE ALLELISM :- When a gene exists in more than two allelic forms.

NON-DISJUNCTION :- Phenomenon in which the members of homologous chromosome pair do not separate during meiosis.

PEDIGREE ANALYSIS :- It is an analysis of the distribution and movement of traits in a series of generations of a family.

PHENOTYPE :- Observable or external characteristics of an organism.

PLEIOTROPY:- When a gene has the ability to have more than one phenotypic effect.

RECESSIVE ALLELE :- Allele that is not expressed in a hybrid/heterozygous condition.

SEX CHRMOSOME :- Chromosomes that are involved in the determination of sex.

TRISOMY :- The condition where a particular chromosome is present in 3 copies in diploid cell.

VARIATION :-Dissimilarities among the individuals of a species. 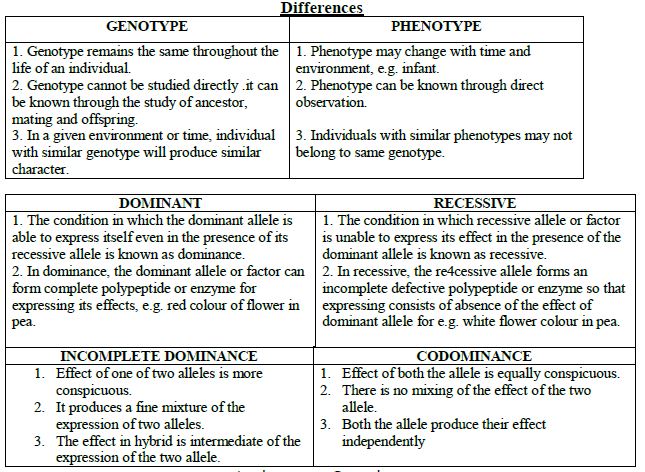 LEVEL 1
1. Name the law that explains the expression of only one of the parental characters in the F1 generation of a monohybrid cross?
2.. What is a linkage map?
3.. How is the child affected if it has grown from the zygote formed by an XX–egg fertilised by a Ycarrying sperm? What do you call this abnormality?
4. Not all characters show true dominance. What are the two other possible type of dominance? Give an example of each?
5. What proportional of individuals produced in the progeny of a cross between two individuals with genotype TtSs will be TtSs and ttss respectively
6.. A cross between two plants heterozygous for a single locus was made. The progeny contained the following:
i) Round seeds, large starch grains:
ii) Round seeds, intermediate starch grains: 2
iii) Wrinkled seeds, small starch grains: 1
What phenomenon is exhibited by the above result? Show the genotype of the parents and offspring using a punnet square.
7. (i)In an experiment3:3:1:1 phenotypic ratio was obtained on crossing a pea plant with axial,violet flowers with another pea plant having axial, white flowers. Judge the accuracy of this result using a punnet square.
(ii) Two plants (Snapdragon) with red flowers and white flowers are crossed and produced all pink flowers in F1 generation
a) What phenomenon is responsible for it.
b) Write the genotype of F1.
c) Write the phenotype of F2 generation.
d) What would be the phenotype and genotype ratio of the F2 generation?

LEVEL 2
1. How many types of glycoproteins (oligosaccharides) that determine the ABO blood group are found on the surface of RBCs in humans?
2. Pick out the possible combinations of blood groups of parents of a boy who has a blood group O?
(i) Mother O group, Father AB group
(ii) Mother O group, Father heterozygous A group
(iii) Both Mother and Father A group (heterozygous)
(iv) Both Mother and Father AB group
3.. What was the most significant conclusion that Mendel drew from his experiment?
4.. A haemophilic man marries a normal homozygous woman. What is the probability that their daughter will be haemophilic?
(a) 100%,
(b) 75%,
(c) 50%,
(d) 0%.
5. A homozygous green seeded plant is crossed with yellow seeded plant. The progeny obtained was half yellow seeded and half green seeded.
i) Write the genotype of yellow seeded progeny.
ii) Write the technical name of cross.
6. A man with blood group O and his wife with blood group AB claim a child with blood group AB as their son. Justify whether it is possible or not with a punnet square.
7. (i) The egg of the animal contains 10 chromosomes of which one is X-chromosome. How many autosomes would be there in the karyotype of this animal?
(ii) What is meant by aneuploidy?
8.Write the sex chromosome complement of each of the following;
(i) Male fowl
(ii) Human female
(iii) Male grasshopper
(iv) Female grasshopper
9. When two genes (involved) in a dihybrid cross are situated on the same chromosome, the proportion of parental gene combination was much higher than the non-parental combination. What is it due to?
Who discovered the phenomenon?
10. (i) Which of the two, sperms or ovum, determines the sex of the offspring in fowl? Why?
(ii) What is the type of sex determination known as?
11. In Lathyrus, blue flower colour and long pollen are dominant over red flower colour and round pollen. In a cross between two plants, one with blue flowers and long pollen, both heterozygous and the other with red flowers and round pollen, the progeny contained the following:
Blue flowers, long pollen           :        42%
Blue flowers, round pollen         :        08%
Red flowers, long pollen            :        08%
Red flowers, round pollen          :       42%
Explain the phenomenon responsible for such result?
12. Justify the situation that in human beings, sex of the child is determined by father, and not by mother?

LEVEL 3
1. What percentage of gametes produced by an individual with genotype AaBb will be ab?
2. Why does deletion or insertion of a segment of DNA result in alteration of chromosomes (also called chromosomal aberration)?
3. If the frequency of parental form is higher than 25% in a dihybrid test cross, what does that indicate about the two genes involved?
4. Dominance is not an autonomous feature of a gene or the product it codes for; it depends on the gene product and the production of a particular phenotype from the gene product. Justify with one example.
5. A colour blind man marries a woman with normal vision whose father was colour blind. Work out a cross to show the genotype of the new couple and their prospective sons?
6. Answer the following questions with reference to the given pedigree. 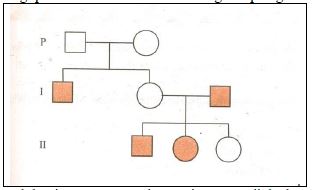 Please click the link below to download pdf file for CBSE Class 12 Biology - Principles of Inheritance and Variations Study Guide.