Class 12 Biology students should refer to the following concepts and notes for Human Health And Disease in standard 12. These exam notes for Grade 12 Biology will be very useful for upcoming class tests and examinations and help you to score good marks 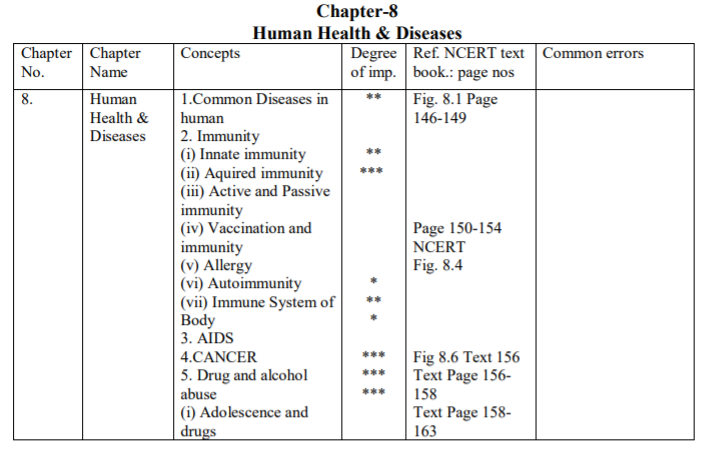 CIRRHOSIS :- A fatal disease of liver causes due to chronic use of alcohol.

CONTACT INHIBITION :- A property of normal cells due to which contact with othercells inhibits their uncontrolled growth. Cancerous cells have lost the quality of contact inhibition hence divide uncontrollably.

DIEASE :- A state when functioning of one or more organs or systems of the body is adversely affected, characterized by various symptoms, we say that we have a disease.

HEALTH :- A state of complete physical, mental and social well being.

IMMUNITY :- The overall ability of organisms to fight the disease causing pathogens, conferred by the immune system is called immunity.

VACCINE :- Weakened pathogen or antigenic proteins of the pathogen introduced / injected into a healthy person to protect him from disease is called vaccine e.g. pulse polio. 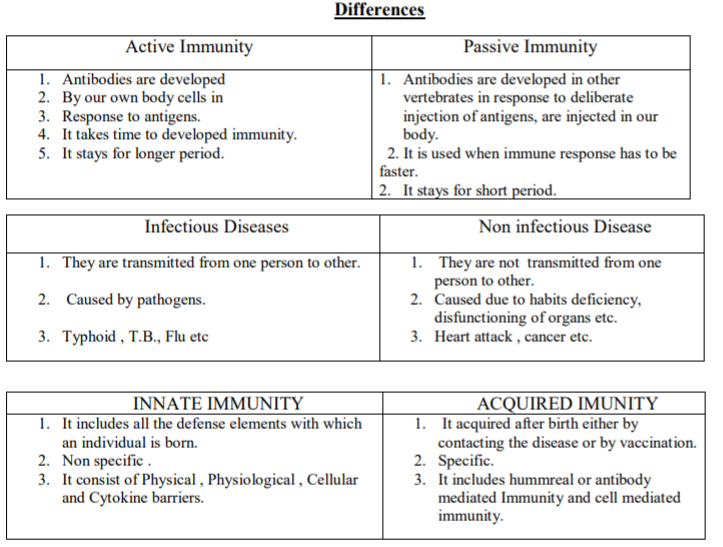 1.It is advised to always complete the course of an anti biotic prescribed by the physician. Give the scientific reason?

2.Why is the antibody –mediated immunity called humoral immunity?

3.Why do children of metro cities of India suffer from allergies and asthma?

4.What is the role of following in body defence against infections?

5.Some viruses can make DNA copy from RNA strand .Explain the mechanisms behind this processes

1A pathogen enters the small intestine through food and water contamination and migrates through blood, the sustained high fever weakness, stomach pain are symptoms. Which test confirms this disease.

2Once a person starts taking alcohol (or)drugs . how he may protect himself

3.Only female Anopheles mosquito acts as a vector? Why?

4. Name a plant other than coca plant that has hallucinogenic property?

5.A group of viruses infected only nose and the respiratory passages but not the lungs. Mention the disease and its causative organism.

6.Enumerate any two properties that distinguish the cancer cells from normal cells.

7.A person suddenly develops fever diarrhoea and weight loss. After test his blood was found low in lymphocytes.

(i) What could be the disease he is suffering from?

(ii) Name the confirmatory test to diagnose the disease.

(iii)Which particular part of the immune system is likely to get affected and in what manner?

8.Which chemicals are produced during allergic reactions? Also name the cells which produce these chemicals?

2.A person need to take immune-suppressive agents all through his/her life after an organ transplant. Why?

3.Name the organism where antigenic polypeptide is produced by recombinant DNA technology 4.A person‘s nails and lips turn grey to bluish. Find out the disease he is suffering from. Name the pathogen.

5.Name the missing organisms/disease in the table below:-

6.Lymph nodes are small solid structures located at different points along the lymphatic vessels. How are they involved in our immune system?

7. A person claimed that he has seen sounds, heard colours and smelt light.

(i) What could be the possible reasons?

Mention any one source for these chemicals.

A ) LSD B) Morphine C) Barbiturates.

Q2 What are the two chemical substances released into the blood by the mast cells ?

Specify the effect of each .

Q3 Why are some children diseases not appear for a second time ?

Q4 How does the skin serve as the first line of defence ?