Class 12 Biology students should refer to the following concepts and notes for Ecosystem in standard 12. These exam notes for Grade 12 Biology will be very useful for upcoming class tests and examinations and help you to score good marks

Question. Which element is formed by the weathering of rocks and absorbed by plant from the soil?
(a) Phosphorus
(b) Carbon
(c) Nitrogen
(d) Oxygen
Answer : A

Question. Phosphorus is needed for the production of
(a) DNA and RNA
(b) cellular membranes
(c) bones and teeth
(d) All of these
Answer : D

Question. In the phosphorus cycle, weathering makes phosphate available first to
(a) producers
(b) decomposers
(c) consumers
(d) None of these
Answer : A

Question. The reservoir for the gaseous type of biogeochemical cycle exists in
(a) stratosphere
(b) atmosphere
(c) ionosphere
(d) lithosphere
Answer : B

Question. In a ……… cycle, the elements returns and is withdrawn from the atmosphere. Most appropriate word to fill the blank is
(a) gaseous
(b) sedimentary
(c) Both (a) and (b)
(d) None of these
Answer : A

Question. The reservoir for the sedimentary cycle exists in
(a) earth’s crust
(b) organic sediments
(c) calcareous sediments
(d) limestone
Answer : A

Question. The total amount of nutrients like carbon, phosphorus, calcium, etc., present in soil at any time is called
(a) standing crop
(b) standing state
(c) nutrient crops
(d) sediment
Answer : B

Question. Which one of the following is not a gaseous biogeochemical cycle in ecosystem?
(a) Oxygen cycle
(b) Phosphorus cycle
(c) Nitrogen cycle
(d) Carbon cycle
Answer : B

Question. Which of the following regulates the amount of carbon dioxide in the atmosphere
(a) respiration in animals
(b) respiration in plants
(c) photosynthesis activity of plants
(d) oceanic resesvoir of carbon
Answer : D

Question. What is themediumbywhich carbon cycle takes place?
(a) Through atmosphere
(b) Through ocean
(c) Through living and dead organisms
(d) All of the above
Answer : D

Question. What human activities are responsible to increase the amount of CO 2 in the atmosphere?
(a) Deforestation
(b) Massive burning of fossil fuels
(c) Vehicle used for transport
(d) All of the above
Answer : D

Question. Which of the following factor is contributing to an overload of the carbon cycle?
(a) Photosynthesis
(b) Cellular respiration
(c) Deforestation
(d) Afforestation
Answer : C

Question. Select the incorrect match. AIIMS 2018
I. Sedimentary nutrient cycle–Nitrogen cycle
II. Pioneer species–Lichens
III. Secondary succession–Burned forests
IV. Pyramid of biomass of aquatic ecosystem–Upright
Codes
(a) I and IV
(b) I, II and III
(c) I and III
(d) III and IV
Answer : A

Question. Assertion (A) An ecosystem is an interaction between biotic and abiotic components.
Reason (R) AG Tansley coined the term ecosystem.
Answer : B

Question. Assertion (A) Herbivores are also called as first order consumers.
Reason (R) These obtain their food directly from plants.
Answer : A

Question. Assertion (A) A network of food chains existing together in an ecosystem is known as a food web.
Reason (R) An animal like kite cannot be a part of a food web.
Answer : C

Question. Assertion (A) The pyramid of energy is always upright.
Reason (R) The flow of energy is unidirectional.
Answer : A

Question. Assertion (A) The pyramid of number of pond ecosystem is upright.
Reason (R) Phytoplanktons are maximum and secondary consumers are lesser in number.
Answer : A

Question. Assertion (A) Oceans act as the global sink for CO 2.
Reason (R) Human activities are increasing CO2 concentration in the air.
Answer : B

Question. Consider the following statements.
I. The components of ecosystem do not include decomposition.
II. Decomposers are saprophytic organisms like fungi,bacteria and flagellates especially abundant in the bottom of the pond.
Choose the correct option.
(a) I is true, but II is false
(b) I is false, but II is true
(c) Both I and II are true
(d) Both I and II are false
Answer : B

Question. Consider the following statements.
I. Producers are also called as transducers because they are able to change radiant energy into chemical form.
II. Consumers are animals, which feed on other organisms or their parts.
III. Decomposers are saprotrophs, which feed on dead bodies of organisms.
Which of the statements given above are correct?
(a) I, II and III
(b) I and II
(c) I and III
(d) II and III
Answer : A 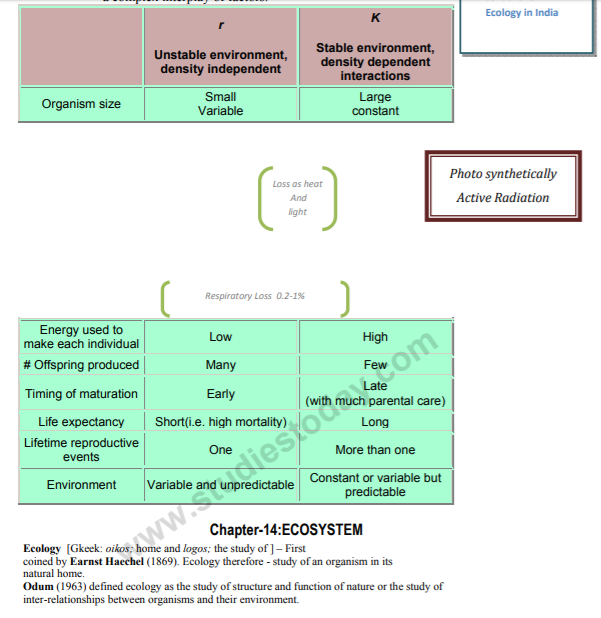 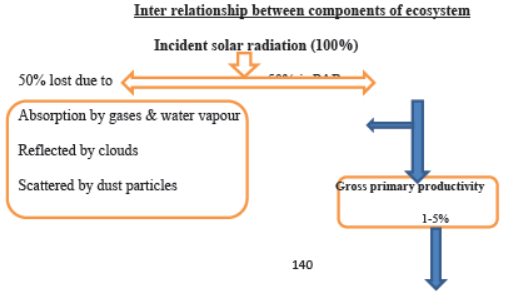 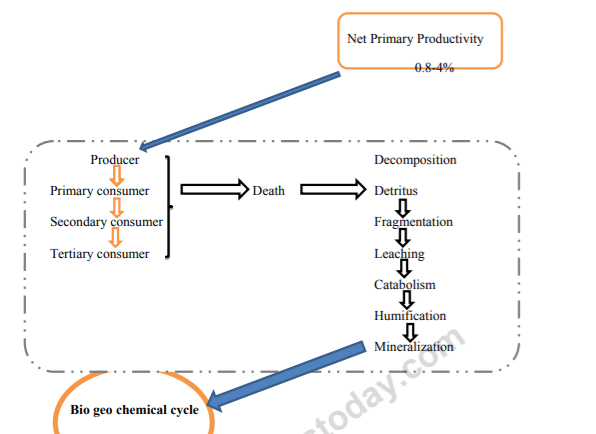 • Habitat: Environment in which a species normally lives or the location of a living organism.

• Ecology: The Scientific Study of the Interactions between organisms and the environment

• Population: A group of individuals of the same species living in a particular geographic area.

• Population ecology: Concentrates mainly on factors that affect how many individuals ofa particular species live in an area.

• Community: Consists of all the organisms of all the species that inhabit a particular area; it is an assemblage of populations of many different species.

• Community ecology: The whole array of interacting species in a community. This area of research focuses on how interactions such as predation, competition, anddisease, as well as abiotic factors such as disturbance, affect community structure andorganization.

• Ecosystem: Consists of all the abiotic factors in addition to the entire community of species that exist in a certain area. An ecosystem—a lake, for example—may containmany different communities.

•Ecosystem ecology: The emphasis is on energy flow and chemical cycling among thevarious biotic and abiotic components.

•Biome: Any of the world’s major ecosystems, classified according to the predominantvegetation and characterized by adaptations of organisms to that environment. Terrestrial regions inhabited by certain types of life, especially vegetation. eg. Deserts, grassland and forests. • Biological diversity - variety of different species (species diversity), genetic variability among individuals within each species (genetic diversity), and variety of ecosystems (ecological diversity).

Biotic potential - maximum rate at which the population of a given species can increase when there are no limits of any sort on its rate of growth.

Carrying capacity (K) - maximum population of a particular species that a given habitat can support over a given period of time.

Consumer - organism that cannot synthesize the organic nutrients it needs and gets its organic nutrients by feeding on the tissues of producers or of other consumers; generally divided into primary consumers (herbivores), secondary consumers (carnivores), tertiary (higher-level) consumers, omnivores, and detritivores (decomposers and detritus feeders).
Deforestation - removal of trees from a forested area without adequate replanting.

Desert - biome where evaporation exceeds precipitation and the average amount of precipitation is less than 25 centimeters (10 inches) a year. Such areas have little vegetation or have widely spaced, mostly low vegetation.

Desertification - conversion of rangeland, rain-fed cropland, or irrigated cropland to desert like land, with a drop in agricultural productivity of 10% or more. It is usually caused by a combination of overgrazing, soil erosion, prolonged drought, and climate change.

Ecological diversity - the variety of forests, deserts, grasslands, oceans, streams, lakes, and other biological communities interacting with one another and with their nonliving environment.

Ecological niche - total way of life or role of a species in an ecosystem. It includes all physical, chemical, and biological conditions a species needs to live and reproduce in an ecosystem.
Ecology - study of the interactions of living organisms with one another and with their nonliving environment of matter and energy.Study of the structure and function of nature.

Environmental degradation - depletion or destruction of a potentially renewable resource such as soil, grassland, forest, or wildlife by using it at a faster rate than it is naturally replenished. If such use continues, the resource can become nonrenewable on a human time scale or nonexistent (extinct).

Extinction - complete disappearance of a species from the earth. This happens when a species cannot adapt and successfully reproduce under new environmental conditions or when it evolves into one or more new species (speciation).

Grassland - biome found in regions where moderate annual average precipitation (25 to 76 centimeters, or 10 to 30 inches) is enough to support the growth of grass and small plants, but not enough to support large stands of trees.

Habitat - place or type of place where an organism or a population of organisms lives.

Immature community - community at an early stage of ecological succession. It usually has a low number of species and ecological niches and cannot capture and use energy and cycle critical nutrients as efficiently as more complex, mature ecosystems.

Keystone species - species that play roles affecting many other organisms in an ecosystem.

Limiting factor - single factor that limits the growth, abundance, or distribution of the population of a species in an ecosystem.

Native species - species that normally live and thrive in a particular ecosystem.

Primary succession - sequential development of communities in a bare area that has never been occupied by a community of organisms.

Secondary succession - sequential development of communities in an area in which natural vegetation has been removed or destroyed but the soil is not destroyed.