Class 12 Biology students should refer to the following concepts and notes for Biotechnology Principles And Processes Study Guide in standard 12. These exam notes for Grade 12 Biology will be very useful for upcoming class tests and examinations and help you to score good marks 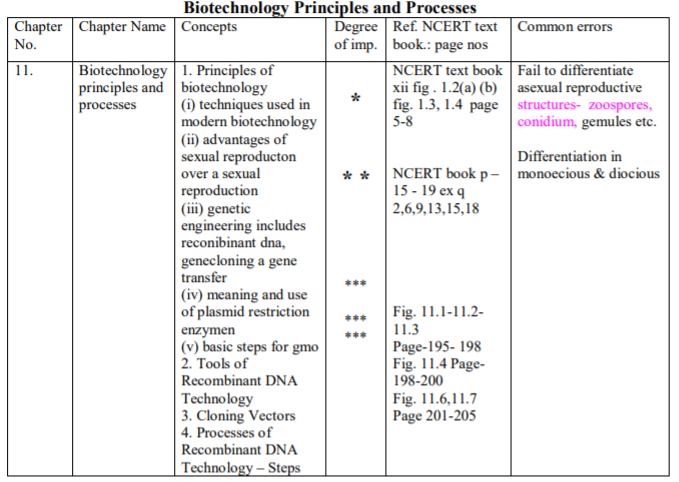 CLONING :- Producing exact copy or copies of a single parent.

DNA LIGASE :- An enzyme that can seal one DNA fragment with another DNA segment, both having sticky ends.

ELUTION :- The process top separate bands of DNA which are cut out from the Agarose gel & extracted from the gel piece.

ENDONUCLEASES :- The enzymes which make cut at specific position within the DNA.

GEL ELECTROPHORESIS :- The technique of separation of DNA fragments on a natural polymer(gel).

GENETIC ENGINEERING :- The technique to after the chemistry of genetic material DNA / RNA to introduce these into host organisms & thus change the phenotype of the host organism.

GENOME :- Total DNA in the cell of an organism.

LIGASE :- An enzyme that joins the ends of two strands of Nucleic acid.

TRANSFORMATION : - It is a process through which a piece of DNA is introduced in a host. 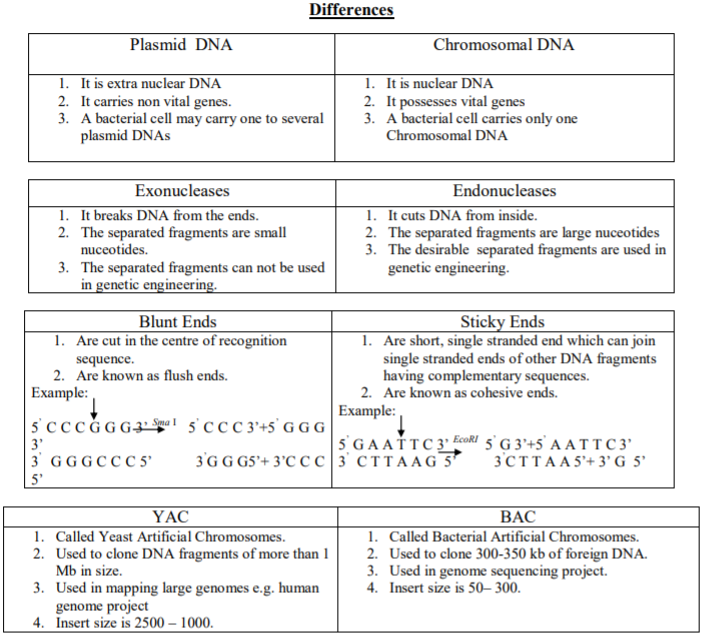 3.Name the polymerase which is generally used in PCR reactions.

4.How is a host cell made competent in introducing rDNA?

5.Name the enzyme commonly used to dissolve the cell wall of bacterial cell?

LEVEL2
1.Why is a thermo stable DNA Polymerase needed in amplification/genetic engineering.

2.For the isolation of the genetic material , cells are treated with cellulose or chitinase . Give reason for it

3.Name the enzyme which cut the DNA molecules into fragments with sticky ends?

5.Name the method in which foreign DNA is directly introduced into host cell?

7.What are the three basic steps involved in a single PCR amplification cycle.

9.How is isolation of the genetic material done?

10.Give diagrammatic representation of rDNA technology

2. Each restriction enzyme cuts the DNA at a specific nucleotide sequence .Name such a sequence.

3.What type of cut ends are formed when both are fonned when both stands of DNA molecule is cleaved exactly at the same nucleotide position?

4.How does a transgenic organism differ from the rest of its population? Cite any two examples of such organism for human advantage

5.How is the gene z (for B-galactosidase) used as marker?

6.Besides better aeration and mixing properties what other advantages do stirred tank bioreactors have over shake flasks ?

7.How are bacteria made capable to take up recombinant DNA? Name the bacteria used for this process.

8.State the principle underlying ‗gel electrphoresis‘ and mention two applications of this technique in Biotechnology.

9.DNA being hydrophilic cannot pass through the cell membrane of a cell. Explain how does recombination DNA get introduced into the cell to transform the latter.

10.In bacterial culture some of the colonies produce blue colour in the presence of a chromogenic substrate and some did not due to the presence or absence of an insert (rDNA) in the coding sequence of the beta- galactosidase.
a) Mention the mechanism and steps involved in the above experiments .
b) How is it better than the technique of plating on two plates having different antibiotics?

2 How is gene transfer in animals done ? Give the suitable example .