Science
Download PDF
Read and download free pdf of CBSE Class 10 Science Control and Coordination Assignment Set B. Get printable school Assignments for Class 10 Science. Standard 10 students should practise questions and answers given here for Science in Grade 10 which will help them to strengthen their understanding of all important topics. Students should also download free pdf of Printable Worksheets for Class 10 Science prepared as per the latest books and syllabus issued by NCERT, CBSE, KVS and do problems daily to score better marks in tests and examinations

Class 10 Science students should refer to the following printable assignment in Pdf for Control And Coordination in standard 10. This test paper with questions and answers for Grade 10 Science will be very useful for exams and help you to score good marks

Question. Which is/are correct correct about insulin?
(a) It controls blood sugar.
(b) It is produced by islets of Langerhans.
(c) It is produced by parathyroid gland.
(d) It is called the fight and flight hormone.
Answer : A , B

Question. Gustatoreceptors lie
(a) on the tongue
(b) in the nose
(c) in the ear
(d) in the eyes
Answer : A

Question. Synaptic terminal is the end of
(a) cyton
(b) dendrite
(c) axon
(d) none of the above
Answer : C

Question : Name the place where largest number of neurons are found in the human body.
a. Stomach
b. Heart
c. Brain
d. Lungs.
Answer : C

Question : The substance that cause fall of mature leave and fruits from plants is due to:
a. auxin
b. gibberllin
c. cytokinin
d. ABA
Answer : D

Fill in the blanks.

Question. Name the hormone which is associated with the metabolism of carbohydrates, proteins, calcium and phosphorus.
Answer: Thyroxine.

Question. Why do living organisms show movement?
Answer: To use changes in the environment to their advantage.

Question. What are the functions of the Hypothalamus?
Answer: Hypothalamus regulates the secretion of hormones from pituitary gland.

Question. Give an example of a plant hormone that promotes its grow th. W’here is it synthesized?
Answer: Auxin promotes growth. It is synthesised at the shoot tip of the plant body.

Question. Name the part of the brain which is concerned with muscular coordination in the body.
Answer: Cerebellum.

Question. What are endocrine glands?
Answer: Ductless glands which manufacture hormones and secrete them directly into the blood stream. 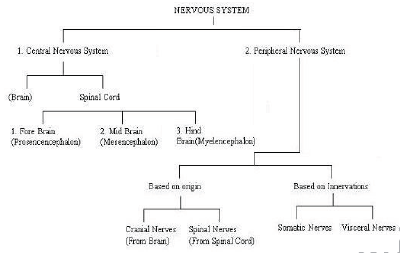 Question : In figure A, B and C, which appears more accurate and why? 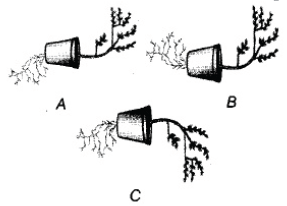 Answer :   This movement of plant part in response to gravity is called geotropic movement and the phenomenon involved is called geotropism. Here, Figure (A) is more accurate to show geotropism. The roots of a plant always grow downward in response to the gravity (called negative geotropism) to make sure they find soil and water. On the other hand, the stem always grows up, i.e., away from gravity pull (called positive geotropism) to make sure it will get light. Both these conditions are shown in figure A.
Question : “Nervous and hormonal systems together perform the function of control and coordination in human beings.” Justify the statement.
Answer :  Control and coordination of functioning of various organ and organ system of the body is under the direct control of nervous system in close coordination with endocrine(hormonal) system. This control is achieved by a complex network of neurons which carry signals in the form of electric impulses; to and from the brain and controls the body function directly whereas, the endocrine system are the ductless glands which release chemical substances directly into the blood and reaching the target site for action.
Nervous and hormonal systems are complementary to each other. Thus, it can be said that nervous and hormonal system together perform the function of control and coordination in human beings.
Question : Define neurons. Identify the parts of a neuron at which:
a. information is all together collected.
b. impulses are converted to chemical signal for further transmission.
Answer : The structural and functional units of nervous system are called neurons. It means the units which makes up the nervous system are called neurons. These are specialized units for acceptance and transmission of impulses to and fro between the brain and other body parts.
a. End of dendrite tip of nerve cell.
b. Dendrite →cell body →axon to its ends.
Question : How does our body respond when adrenaline is secreted into the blood?
Answer :  When adrenaline is secreted into the blood, it prepares our body for emergency action. It speeds up heart beat and breathing, raises blood pressure and allows more glucose to go into the blood to give us a lot of energy quickly to fight or urn away from frightening situation. The blood supply decreases form the skin and digestive system and increase to skeletal muscles. All there conditions help the individual to respond the emergency situation.

Question : What are the major parts of the brain? Mention the functions of different parts.
Answer :   The brain is covered by a three layered system of membranes; called meninges. Cerebrospinal fluid is filled between the meninges. The CSF provides a cushion to the brain against mechanical shocks. The brain is located inside the skull for maximum protection. The human brain can be divided into three regions, viz. forebrain, midbrain and hindbrain. 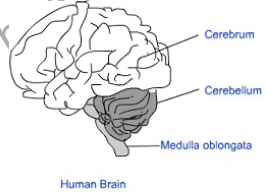 Forebrain: It is divided into three regions:
1. Olfactory Lobes - These lobes receives impulses from olfactory receptors of nose region.
2. Cerebrum - It is the largest part of the brain and helps in speech, intellectuality, mapping, hearing, sight, taste, smell, etc.
3. Diencephalon - It has Hypothalamus which has control centre for hunger, thirst, sweating, emotions, etc.
Midbrain: It controls the reflex movements of head, neck and trunk in response to visual and auditory stimuli, changes in pupil size, etc.
Hindbrain: It consists of three parts:
1. Cerebellum - It maintains posture, equilibrium and Muscle tone.
2. Pon Varolii - It controls some aspects of respiration.
3. Medulla Oblongata - It controls heart rate, breathing movements, coughing, sneezing, vomiting, etc.
Question : With the help of labelled diagram explain the general scheme to illustrate how nervous impulses travel in the body?
Answer :

The information from the environment is detected by receptors and passed on to the dendrite of the sensory neuron, from where the electrical signals are passed on to the cyton then to axon and finally to the presynaptic knob which releases neurotransmitters which goes to the synaptic cleft and generates an electric response on to the dendrite of the next neuron and ultimately to brain (or spinal cord). The response from brain (or spinal cord) is similarly passed on to the effector, that ndergoes the desired response.
Click to View or Download pdf file ›
Click for more Science Study Material ›