Science
Download PDF
Read and download free pdf of CBSE Class 10 Physics Light Assignment Set A. Get printable school Assignments for Class 10 Physics. Standard 10 students should practise questions and answers given here for Physics in Grade 10 which will help them to strengthen their understanding of all important topics. Students should also download free pdf of Printable Worksheets for Class 10 Physics prepared as per the latest books and syllabus issued by NCERT, CBSE, KVS and do problems daily to score better marks in tests and examinations

Class 10 Physics students should refer to the following printable assignment in Pdf for Light in standard 10. This test paper with questions and answers for Grade 10 Physics will be very useful for exams and help you to score good marks

Question : Match the following with the correct response:

Question. Assertion (A): Convex mirror is preferred for rear view mirrors in vehicles.
Reason (R) :The field view of a convex mirror is lesser than that of concave mirror.

Question. Assertion (A): Light changes its speed when it passes from one medium to another.
Reason (R): When a ray travels from vacuum to a medium, then refractive index is known as absolute refractive index.

Question. Assertion (A): Large Concave mirrors are used to concentrate sunlight to produce heat in solar cookers.
Reason (R): Concave mirror converges the light rays falling on it to a point.

Question. Assertion (A): The angle of incidence for a ray of light having zero angle of reflection is two.
Reason (R): Refracting surfaces follow Snell’s Law.

Question. Assertion (A) : It is impossible to see virtual image with our naked Eye.
Reason (R) : The rays do not actually emanate from a virtual image.

Question : When a plane mirror is placed horizontally on the levelled ground at a distance of 40 m from the foot of a tower, the top of the tower and its image in the mirror subtend an angle of 90° at the eye. What is the height of the tower?
Answer : 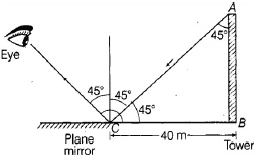 Question :  Form the image in case an object is moved from infinity to the concave mirror.
Answer :  Images formed by a concave mirror.
Object at Infinity. Two cases arise :
i. Object between F and P. A ray AD from A goes parallel to principal axis after reflection passes through F (rule 1). Another ray AE striking the mirror normally through C is reflected back (rule 3). They form virtual image of the object behind the mirror. The image is erect and enlarged.

Object between F and P. An erect, enlarged, virtual image is formed behind the mirror.
Images Formed by a Concave mirror
ii. Object at F. A ray AD parallel to principal axis passes through F. Another ray AE strikes the mirror normally at E is reflected back as it passes through C (Rule 3).
They form image of object AB at infinity. The image is very much enlarged and is real and inverted.

Object at E. Real, inverted, extremely enlarged image is formed at infinity.
iii. Object between F and C (f and 2f) A ray AD from object going parallel to principal axis is reflected towards F (Rule 1). Another ray AE through C is reflected back (Rule 3) forming image of A at A'. Similarly image of B is formed at B'. Image is real, inverted, enlarged and beyond C (2f) i.e. as shown in fig.

Object at C, Image is also at C. It is real.
v. Object beyond C. A ray AD from A parallel to principal axis after reflection passes through F (Rule 1), Another ray from A through C, ray AG is reflected back along the same path (Rule 3), forming real, diminished, inverted image of AB is formed at A'B', between F and C.

Object beyond C, a real, inverted diminished image between F and C, inverted at C and is of same size as that of object.
vi. When mirror is inclined so that the rays strike the mirror obliquely. The ray AB passing through F after reflection goes parallel to principal axis towards BA' (Rule 2). Another ray DE through C striking the mirror at E is reflected back. The two form an image at A' Image is real, inverted, extremely diminished and at F. 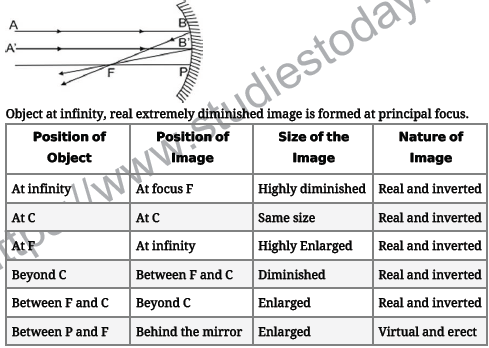 Question :  With the help of a ray diagram show the type of images formed when object is placed at the following positions in front of concave mirror.
(a) at infinity
(b) beyond C
(c) at F (d) at C
(e) between F and C
(f) between F and O

Question. Nidhi wanted the image of her pencil to be double the size of its original size. Name the mirror used for getting such image.
Answer : Concave mirror.

Question. An incident ray makes an angle of 60° with the mirror. What is the angle of reflection?
Answer : 60°.

Question. What are the two types of reflection?
Answer : (i) Regular (ii) Irregular

Question. Give characteristics of image formed by plane mirror
Answer : • Image is virtual and erect.
• Size is same as of the object.
• It is formed at same distance.

Question. Give uses of convex mirror.
Answer : • It is used as the rear view mirror in cars.
• It is used in street lights as it diverge the light over larger area.

Question. In a small town fair Akshay took his friend and showed him a mirror in which his image showed upper half body very fat and lower body very thin. Akshay’s friend got upset but
Akshay explained him by showing his similar image in the mirror.
(a) Name two mirrors used in this fair shop.
(b) Name the mirror in which the size of image is small.
(c) What value of Akshay is reflected?
Answer : (a) Concave and convex mirror.
(b) Convex mirror gives small size image.
(c) Akshay showed compassion and empathy.

Q1 A ray of light AM is incident on a spherical mirror as shown in the diagram. Redraw the diagram and show the path of reflected ray.

Q2 Explain why a ray of light passing through the centre of curvature of a concave mirror gets reflected along the same path?

Q3 What is the radius of plane mirror?

Q4 Why do we use convex surface for side view mirror?

Q5 Relate the focal length ‘f ‘ and the radius of curvature ‘R’.

Q6 Which kind of mirror is used in the headlights of a motor car and why?

Q7 What is focal length of a plane mirror?

Q8 A concave mirror is placed in water. Will there be any change in the focal length? Give reasons.

Q9 Name the type of mirror which always forms a virtual and diminished image.

Q10 A ray of light LM is incident on a mirror as shown in the figure. The angle of incidence for the ray is the angle between it and the line joining the other points in the figure. Name these two points. 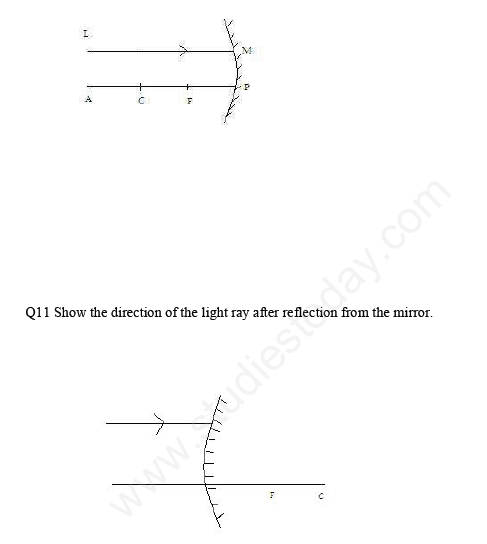 Q12 Can a virtual image be photographed?

Q13 Locate the position of image formed by a concave mirror if the object is at 2F or C.
Q14 Find the focal length of a convex mirror whose radius of curvature is 32cm.