Science
Download PDF
Read and download free pdf of CBSE Class 10 Physics Electricity Assignment Set A. Get printable school Assignments for Class 10 Physics. Standard 10 students should practise questions and answers given here for Physics in Grade 10 which will help them to strengthen their understanding of all important topics. Students should also download free pdf of Printable Worksheets for Class 10 Physics prepared as per the latest books and syllabus issued by NCERT, CBSE, KVS and do problems daily to score better marks in tests and examinations

Question. Electrical resistivity of any given metallic wire depends upon
(a) its thickness
(b) its shape
(c) nature of the material
(d) its length
Answer. C

Question. What is the commercial unit of electrical energy?
(a) Joules
(b) Kilojoules
(c) Kilowatt-hour
(d) Watt-hour
Answer. C

Question. The heating element of an electric iron is made up of:
(a) copper
(b) nichrome
(c) aluminium
(d) iron
Answer. B

Question. A student carries out an experiment and plots the V-I graph of three samples of nichrome wire with resistances R1 , R2 and R3 respectively. Which of the following is true? 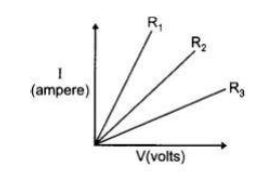 Question. Coulomb is the SI unit of:
(a) Charge
(b) current
(c) potential difference
(d) resistance
Answer. A

Question. Calculate the current flow through the 10 Ω resistor in the following circuit.

Question. The obstruction offered by material of conductor to the passage of electric current is known as :
(a) Resistance
(b) Conductance
(c) Inductance
(d) None of these
Answer. A

Question. The unit of potential difference is :
(a) Volt
(b) Ohm
(c) Ampere
(d) Faraday
Answer. A

Question. The instrument used for measuring electric current is :
(a) Ammeter
(b) Galvanometer
(c) Voltmeter
(d) Potentiometer
Answer. A

Question. While a cell is being charged, energy is converted into energy.
(a) mechanical, electrical
(b) electrical, chemical
(c) heat, electrical
(d) chemical, heat
Answer. B

Question. Copper is not preferred to make fuse wire because it .
(a) is a good conductor of electricity
(b) has a low melting point
(c) has a high melting point
(d) is not easily available
Answer. B 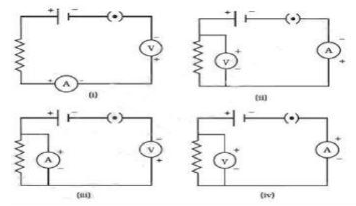 ASSERTION-REASON TYPE QUESTIONS
Following questions consist of two statements – Assertion (a) and Reason (R). Answer these questions selecting the appropriate option given below:
(a) Both A and R are true and R is the correct explanation of (a)
(b) Both A and R are true but R is not the correct explanation of (a)
(c) A is true but R is false.
(d) A is false but R is true.

Question. Assertion (a) : Bending a wire does not affect electrical resistance.
Reason (R) : Resistance of a wire is proportional to resistivity of material.
Answer.  B

1.Electrical resistivities of some substances, at 20°C are given below in the table. Study the table and answer the given questions.

Question. Which is a better conductor of electric current ?
(a) Silver
(b) Copper
(c) Tungsten
(d) Mercury
Answer. A

Question. Which element will be used for electrical transmission lines ?
(a) Iron
(b) Copper
(c) Tungsten
(d) mercury
Answer. B

Question. Nichrome is used in the heating elements of electric heating device because:
(a) It has high resistivity
(b) It does not oxidise readily at high temperature
(c) Both of the above
(d) None of the above
Answer. C

2. In the given circuit, three identical bulbs B1, B2 and B3 are connected in parallel with a battery of 4.5 V. Study the diagram and answer the questions given below:

Question : What does an electric circuit mean?
Answer- A continuous closed path made of electric components through which an electric current flows is known as an electric circuit.
Question : Define the unit of current.
Answer- The unit of current is ampere. Ampere is defined by the flow of one coulomb of charge per second.
Question : Calculate the number of electrons constituting one coulomb of charge.
Answer- Charge = q = 1 C
Number of electrons = n = ?
Charge on an electron = e = 1.6 x 10-19 C
We know that, q = ne
Hence, n = q/e = 1 / 1.6 x 10-19 = 6.25 x 1018 electrons.
Question : Name a device that helps to maintain a potential difference across a conductor.
Answer- Battery and cell.
Question : What is meant by saying that the potential difference between two points is 1 V?
Answer- When 1 J of work is done to move a charge of 1 C from one point to another, it is said that the potential difference between two points is 1 V.
Question : How much energy is given to each coulomb of charge passing through a 6 V battery?
Answer- Charge = q = 1 C
Potential difference = V = 6 V
Energy = W = ?
We know that, v =w/q
, Hence, W = Vq = 6 x 1 = 6 J (joule).
Question : On what factors does the resistance of a conductor depend?
Answer- The resistance of the conductor depends on: Length, Cross-sectional area, Temperature and Nature of the material of the conductor.
(1) Resistance is directly proportional to the length of conductor.
(2) Resistance is inversely proportional to the area of cross section of the conductor.
Question : Will current flow more easily through a thick wire or a thin wire of the same material, when connected to the same source? Why?
Answer- The current will flow more easily through thick wire. It is because the resistance of a conductor is inversely proportional to its area of cross - section. So thicker wire has less resistance and hence more easily the current flows.
Question : Let the resistance of an electrical component remain constant while the potential difference across the two ends of the component decreases to half of its former value. What change will occur in the current through it?
Answer- According to Ohm’s law (V=IR) current is directly proportional to the potential difference across the ends of the conductor if resistance remains constant. Hence current will also decrease to half of its former value
i.e.1/2.
Question : Why are coils of electric toasters and electric irons made of an alloy rather than a pure metal?
Answer- Because the melting point and resistivity of an alloy are much higher than a pure metal.
Question : Use the data in the table 12.2 and answer the following questions:

Now equivalent resistance (R) for the circuit is: 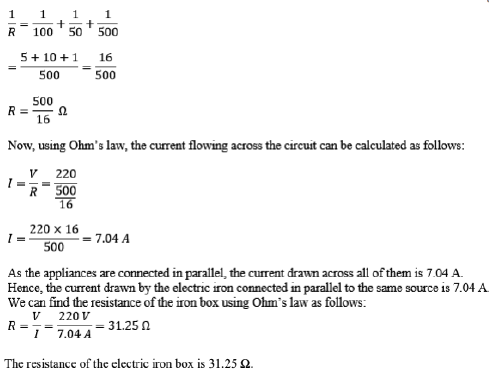 1. When does the current flow in an electric circuit?
2. What is the difference between resistance and resistor?
3. What are the factors on which the resistance of conductor depends? Give the corresponding relation.
4. Calculate the resistance of a 2m long nichrome wire of radius 0.321mm. Resistivity of nichrome is 15 x 10-6 Ω m. If the potential difference of 10v is applied across this wire, what will be the current in the wire?
5. Derive an expression for the equivalent resistance of three resistances connected in series?
6. Derive an expression for the combination of three resistances connected in parallel.
7. Express Ohm’s law both by a mathematical formula and by a graph.
8. Derive an expression for the heat produced in a resistor R when a voltage drop across it is V. Hence state Joule’s law of heating.
9. Describe some practical applications of heating effect of the electric current.
10. An electrical heater is used on a 220v supply and takes a current of 5A
1. What is its power
2. What is the cost of using the heater for 50 hours if 1 KWh costs Rs. 1.50?
11. A house hold uses the following electric appliances :
i) Refrigerator of rating 400 W for 10 hours each day.
ii) Two electric fans of rating 80 W each for 12 hours each day.
iii) Six electric tubes of rating 18 W each for 6 hours each day.
Calculate the electricity bill of the house hold for the month of June if the cost per unit of electric energy is Rs. 3
12. Distinguish between kilowatt and kilowatt hour.
13. Define the term electric energy. Write an expression of the electric energy consumed in an electric circuit.
14. Define the term electric power. Write an expression for it.
15. Define kilowatt hour. How many joules are equal to 1 KWh.
16. Two identical resistors, each of resistance 10 Ohms are connected
i) in series ii) in parallel, in turns to a battery of 6 volts. Calculate the ratio of power consumed in the combination of resistors in two cases.