CBSE Class 10 Science Carbon and its compounds Assignment Set A

Science
Download PDF
Read and download free pdf of CBSE Class 10 Science Carbon and its compounds Assignment Set A. Get printable school Assignments for Class 10 Science. Standard 10 students should practise questions and answers given here for Science in Grade 10 which will help them to strengthen their understanding of all important topics. Students should also download free pdf of Printable Worksheets for Class 10 Science prepared as per the latest books and syllabus issued by NCERT, CBSE, KVS and do problems daily to score better marks in tests and examinations

Class 10 Science students should refer to the following printable assignment in Pdf for Carbon And Its Compounds in standard 10. This test paper with questions and answers for Grade 10 Science will be very useful for exams and help you to score good marks

Class 10 Science Assignment for Carbon And Its Compounds

Question : Write the name and structure of an aldehyde with four carbon atoms in its molecule.
Answer :

Question : How are covalent bonds formed ?
Answer : Covalent bonds are formed by the sharing of electrons between the atoms.

Question : Write the molecular formula of the 2nd member of the homologous series where the first member is ethyne.
Answer : C3H4, C4H6

Question : Which element exhibits the property of catenation to maximum extent and why ?
Answer : Carbon, due to strong C—C bond.

Question : Write the name and structure of an alcohol with three carbon atoms in its molecule.
Answer : Propanol,

Question : What is a homologous series of carbon compounds ?
Answer : A homologous series is the family of organic compound having the same functional group, and the successive (adjacent) members of which differ by CH2 unit or 14 atomic mass unit.

Question : Write the molecular formula of the 2nd and the 3rd member of the homologous series whose first member is methane.
Answer :. Ethane (C2H6)
Propane (C3H8)

Question : Define catenation.
Answer : The property of self-linking of atoms of an element through covalent bonds in order to form straight chain, branched chains or cyclic chains of different sizes is called catenation.

Question : Name the following compounds:
(i) CH3—CH2—OH,
Answer : (i) Ethanol

Question : Write the name and structure of an aldehyde with four carbon atoms in its molecule.
Answer :

Question : Write the molecular formula of the 2nd and 3rd member of the homologous series whose first member is ethene.
Answer : C3H6 and C4 H8

Question : Explain the formation of scum when hard water is treated with soap.
Answer : Soap does not work properly when the water is hard. A soap is a sodium or potassium salt of long chain fatty acids. Hard water contains salts of calcium and magnesium.
When soap is added to hard water, calcium and magnesium ions present in water displace sodium or potassium ions from the soap molecules forming an insoluble substance called scum. A lot of soap is wasted in the process.

Question : Give reason why carbon can neither form C4+ cations nor C4– anions, but forms covalent compounds. Also, state the reason to explain why covalent compounds are bad conductors of electricity and have low melting and boiling points?
Answer : Carbon cannot form C4+ cation because removal of 4 electrons from a carbon atom would require a large amount of energy.
Carbon cannot form C4– anion because it would be difficult for the nucleus with 6 protons to hold on to 10 electrons.
Hence, carbon atoms share electrons forming covalent compounds.
Covalent compounds do not form ions/ charged particles and therefore do not conduct electricity.
Inter-molecular forces of attraction are weak, hence they have low melting and boiling points.

Question : An aldehyde as well as a ketone can be represented by the same molecular formula, say C3H6O. Write their structures and name them. State the scientific relation between the two.
Answer : (i) Propanal (aldehyde); 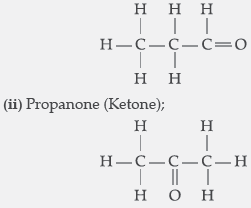 Question : Give a test that can be used to confirm the presence of carbon in a compound. With a valency of 4, how is carbon able to attain noble gas configuration in its compounds?
Answer : When carbon compound is burnt in the presence of oxygen, a gas is evolved. Gas evolved turns lime water milky.
By sharing its four valence electrons with other elements, carbon attains stable noble gas configuration.

Question : What is meant by isomers ? Draw the structure of two isomers of butane, C4H10. Explain why we cannot have isomers of first three members of alkane series.
Answer : Isomers are the compounds which have the same molecular formula but different structural formula.
Isomers of Butane:

We cannot have isomers of the first three members of the alkane series because of the following laws of isomers:
(i) The parent chain should have the most number of carbon atoms.
(ii) The branching cannot be done from the first and the last carbon atom of the structure.

Question : The number of carbon compounds is more than those formed by all other elements put together. Justify the statement by giving two reasons.
Answer : (i) Due to self linking ability of carbon/catenation.
(ii) Since carbon has a valency of four it can form bonds with four other atoms of carbon or atoms of some other monovalent element.
(iii) Due to small size of carbon it forms very strong and (or) stable bonds with other elements.

Question : Draw the structures of the following compounds and identify the functional group present in them:
(i) Butanoic acid
(ii) Bromopropane
(iii) Butyne
Answer : 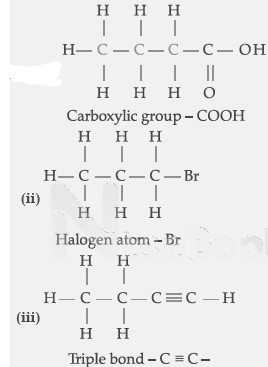 Question : What is a homologous series of carbon compounds?
Give an example and list its three characteristics.
Answer : A series of compounds in which the same functional group substitutes for hydrogen in a carbon chain is called a homologous series.
Example: Alkane / Alkene / Alkyne / Alcohol or any other one correct example.
Characteristics:
(i) They have same general formula.
(ii) They have same functional group.
(iii) The difference in the molecular mass of two successive member is 14u.
(iv) The difference in the molecular formula of two successive member is of CH2 unit.
(v) They have similar chemical properties.

Question : How would you distinguish experimentally between an alcohol and a carboxylic acid?
Answer :  The following two tests are used:
i. Litmus test: Treat the given compound with blue litmus solutions. If the blue litmus solution turns red, it is a carboxylic acid and if does not turn red, it is an alcohol.
ii. Sodium bicarbonate test: Add some sodium bicarbonate solution to the given compound. If there is a brick evolution of a colourless and odourless gas (CO2 ) which turns freshly prepared lime water milk, it is carboxylic acid and if there is no effervescence, it is an alcohol.
Long Answer Type Questions :
Question : i. What are hydrocarbons? Give examples.
ii. Give the structural differences between saturated and unsaturated hydrocarbons with two examples each.
iii. What is functional group? Give examples of four different functional groups.
Answer : i. The compounds that are made up of carbon and hydrogen atoms are called hydrocarbons, e.g. methane (CH4), ethane (CH2 = CH2). Ethyne (C2H2), cyclohexane (C6H12), benzene (C6H6)etc.
ii. In saturated hydrocarbons, all the four valencies of carbon are satisfied by a single covalent bond while in unsaturated hydrocarbons, double or triple bonds are required to satisfy the valencies of carbon, e.g.
a. Saturated hydrocarbons
Methane (CH4), Ethane (CH3 — CH3)
b. Unsaturated hydrocarbons
Ethene (H2C = CH2), Ethyne (HC ≡ CH)
iii. A functional group is an atom or group of atoms that define the structure (or the properties) of organic compounds. The four examples are:
a. -OH Alcohol
b. -COOH Carboxylic acid
c. -CHO Aldehyde
d. -X Halogen

Question : What is methane ? Draw its electron dot structure. Name the type of bonds formed in this compound. Why are such compounds: (i) poor conductors of electricity and (ii) have low melting and boiling points ? What happens when this compound burns in oxygen ?
Answer : Methane is a colourless and highly flammable gas produced on decomposition of vegetation naturally in marshlands. It is the simplest hydrocarbon (CH4).
Electron dot structure:
All the bonds present between four hydrogen atoms and one carbon atom at the centre are covalent bonds.
(i) Methane is a poor conductor of electricity as all the bonds present are covalent bonds. Hence, no free electrons are available for conduction of electricity.
(ii) As force of attraction between the molecules are not very strong in covalently bonded carbon compounds, therefore, methane being a covalent compound has very low melting and boiling point.
When methane burns in oxygen, carbon dioxide, water and large amount of heat and light is released.
CH4 + 2O2 → CO2 + 2H2O + heat and light

Question : i. Write the names of the functional groups in

.
ii. Describe a chemical test to distinguish between ethanol and ethanoic acid.
iii. Write a chemical equation to represent what happens when hydrogen gas is passed through an unsaturated hydrocarbons in the presence of nickel as a catalyst?
Answer :
i. a. Ketone (R-CO-R)
b. Aldehyde (R-CHO)
ii. Distinguish between ethanol and ethanoic acid:
a. Ethanol does not react with metal carbonate while ethanoic acid reacts with metal carbonates to form salt, water and CO2.
e.g. 2CH3COOH + Na2CO3 → 2CH3 COONa + CO2+ H2O
b. Ethanol does not react with NaOH while ethanoic acid reacts with NaOH to form sodium ethanoate and water
e.g. CH3COOH+NaOH →  CH3 COONa+ H2O
c. Ethanol can undrergo oxidation to produce aldehyde and futher it can oxidize to produce acid.
iii. saturated hydrocarbon is obtained as hydrogen gas passed through unsaturated hydrocarbon. The reaction is an example of addition reaction better known by the name of hydrogenation reaction.