Science
Download PDF
Read and download free pdf of CBSE Class 10 Science Biology Respiration Assignment. Get printable school Assignments for Class 10 Biology. Standard 10 students should practise questions and answers given here for Biology in Grade 10 which will help them to strengthen their understanding of all important topics. Students should also download free pdf of Printable Worksheets for Class 10 Biology prepared as per the latest books and syllabus issued by NCERT, CBSE, KVS and do problems daily to score better marks in tests and examinations

Class 10 Biology students should refer to the following printable assignment in Pdf for Respiration in standard 10. This test paper with questions and answers for Grade 10 Biology will be very useful for exams and help you to score good marks

Question. Lack of oxygen in muscles often leads to cramps in the legs of sprinters. This is due to conversion of pyruvate to :
(a) ethanol
(b) carbon dioxide
(c) acetic acid
(d) lactic acid

Question. In cockroaches, air enters the body through :
(a) lungs
(b) gills
(c) spiracles
(d) skin

Question. Which of the following is most likely to have a much higher breathing rate ?
(a) man
(b) fish
(c) dog
(d) sparrow

Question. During the deficiency of oxygen in tissues of human beings, pyruvic acid is converted into lactic acid in :
(a) cytoplasm
(b) chloroplast
(c) mitochondria
(d) golgi body

Question. Which of the following increases in muscle cells when they are lacking in oxygen ?
(a) carbon dioxide
(b) lactose
(c) lactic acid
(d) uric acid

Question. Internal respiration may be defined as :
(a) breathing in and releasing of oxygen in the tissue
(b) the oxidation of food substances to release energy
(c) the building up (synthesis) of complex substances
(d) getting rid of carbon dixode that would accumulate in the tissues.

Question. The photosynthesis in a plant is not taking place during the day time if the plant is releasing :
(a) water vapour
(b) oxygen
(c) carbon dioxide
(d) all the above

Question. The breathing and respiration in woody stem of a plant takes place through :
(a) root hair
(b) lenticels
(c) closed stomata
(d) open stomata

Question. One of the following organism does not depend on simple diffusion of gases for breathing and respiration.
This organism is :
(a) Amoeba
(b) Prawn
(c) Planaria
(d) Bryophyllum

Question. During marathon, we sometimes get painful contractions of leg muscles due to the accumulation of one of the following in leg muscles. This is :
(a) carbon dioxide
(b) alcohol
(c) lactose
(d) lactic acid

(a) Which organism is undergoing aerobic respiration ?
Answer : B

(b) Which organism is undergoing anaerobic respiration ?
Answer : A

(c) Which type of organism, A or B, can convert glucose into alcohol ?
Answer : A

(d) Name one organism which behaves like A.
Answer : Yeast

Question. A, B and C are three living organisms. The organism A is a unicellullar fungus which can live without air.
It is used in the commercial production of an organic compound P from molasses. The organism B is a  unicellular animal which lives in water and feeds and moves by using pseudopodia. It breathes through an organelle Q. The organism C is a tiny animal which acts as a carrier of malarial parasite. It breathes and respires through a kind of tiny holes R and air-tubes S in its body.

(c) Which organism/organisms undergo aerobic respiration ?
Answer : B and C 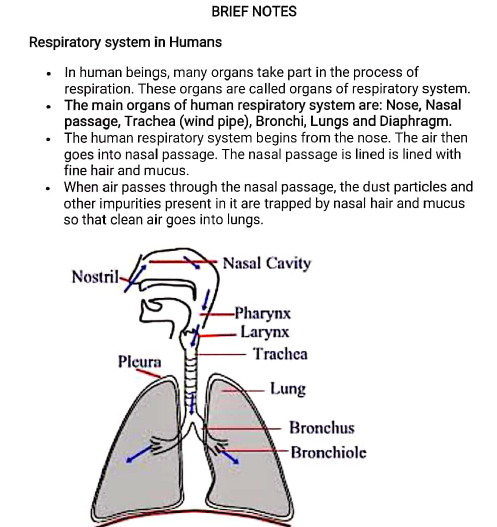 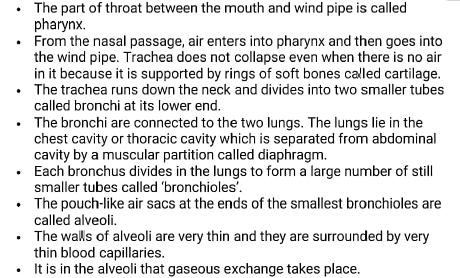 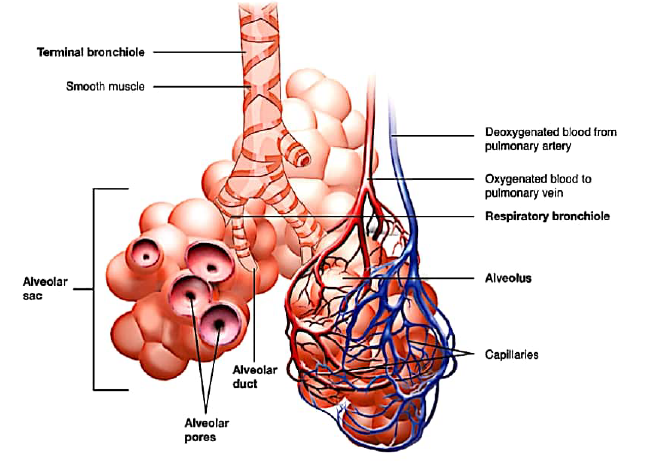 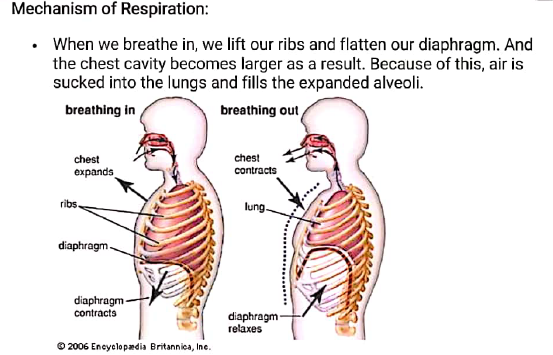 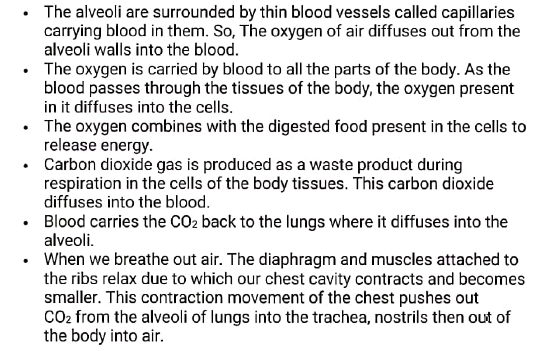 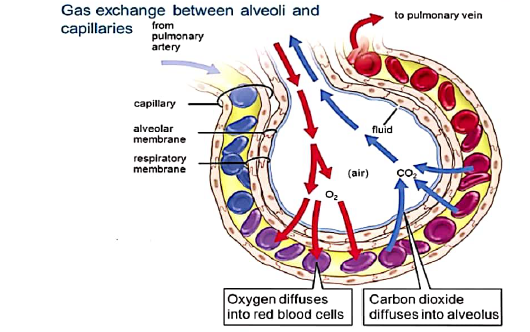 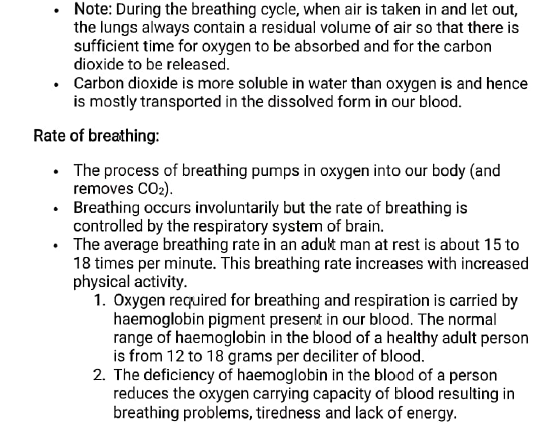 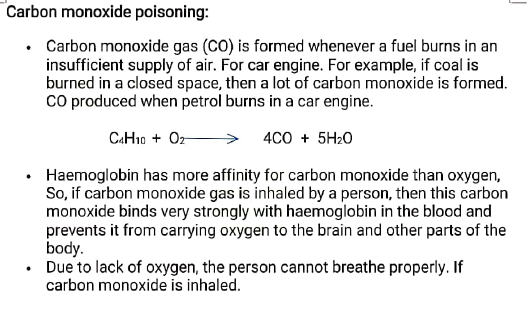 Question : 1 Name the intermediate and the end product of glucose break down in aerobic respiration

Question : 2 a) Draw the respiratory system of human beings
b) Label the following in the diagram drawn Larynx , Trachea , Primary bronchus , Lungs
c ) What happens to the carbon dioxide which collect in the human tissues ?

Question : 3 Why is the rate of breathing in aquatic organisms much faster than that seen in terrestrial organisms? How does oxygenation of blood takes place in fish?

Question : The process of respiration is concerned with
(A) liberation of oxygen
(B) liberation of carbon dioxide
(C) liberation of energy
(D) intake of oxygen
Answer :  C
Question : The common immediate source of energy for cellular activity is
(A) NAD
(B) ATP
(C) DNA
(D) RNA
Answer :  B
Question : The tissue respiration refers to
(A) inspiration
(B) external respiration
(C) internal respiration
(D) expiration
Answer :  C
Question :  If the CO2 concentration in the blood increases, the rate of breathing will
(A) decrease
(B) stop
(C) increase
(D) have no effect
Answer :  C
Question : Vocal cards occur in
(A) pharynx
(B) glottis
(C) bronchial tube
(D) larynx
Answer :  D
Question : In man, which of the following structures is analogous to the spiracles of cockroach ?
(A) Alveoli
(B) Lungs
(C) Bronchioles
(D) Nostrils
Answer :  D
Question : Which of the following prevents collapsing of trachea ?
(A) Diaphragm
(B) Ribs
(C) Cartilaginous ring
(D) Muscles
Answer :  C
Question : Which of the following gases makes the most stable combination with the hemoglobin of red blood cells.
(A) CO2
(B) CO
(C) O2
(D) N2
Answer :  B
Question : Volume of air inspired or expired with each normal breath is called
(A) tidal volume
(B) inspiratory capacity
(C) total lung capacity
(D) residual volume
Answer :  A
Question : Most of the carbon dioxide in the blood is carried in the form of
(A) carbonic acid
(B) bicarbonates
(C) carbaminohaemoglobin
(D) dissolved CO2
Answer :  B
Question : Breathing rate in mammals in controlled by a part of the brain called the
(A) thalamus
(B) hypothalamus
(C) medulla oblongata
(D) cerebellum
Answer :  C
Question : In anaerobic respiration
(A) O2 is taken in
(B) CO2 is taken in
(C) O2 is given out
(D) CO2 is given out
Answer :  D
Question : Disease called pleurisy is due to
(A) inflammation of pleura
(B) inflammation of trachea
(C) inflammation of alveoli
(D) none of these above
Answer :  A
Question : Leaves respire with the help of
(A) lenticles
(B) stomata
(C) plasmodesmata
(D) cuticle
Answer : B
Question : Correct statement is
(A) roots of plant respire through lenticles and stomata.
(B) stem of plant respire through lenticles
(C) both A and B are correct
(D) both A and B are incorrect
Answer :  B
Question : Which of the following is not a characteristic of good respiratory surface ?
(A) Thin and moist
(B) Large surface area
(C) Close to oxygen and gas transport
(D) Thick and dry surface
Answer : D
Question : Respiration in yeast
(A) takes place in the presence of oxygen
(B) yields lactic acid and carbon dioxide
(C) in anaerobic and produces carbon dioxide
(D) takes place only in darkness
Answer : C
Question : Muscle cells engaged in vigorous activity build up a high concentration of
(A) lactic acid
(B) pyruvic acid
(C) alcohol
(D) cholesterol
Answer : A
Question : Exchange of respiratory gases takes place in an earthworm through
(A) moist skin
(B) gills
(C) trachea
(D) lungs
Answer : A
Question : Oxygen is transported in blood mainly by
(A) leucocytes
(B) erythrocytes
(C) thrombocytes
(D) blood plasma
Answer :  B