Read and download free pdf of CBSE Class 10 Science Biology Life Process Respiration Assignment. Get printable school Assignments for Class 10 Biology. Standard 10 students should practise questions and answers given here for Biology in Grade 10 which will help them to strengthen their understanding of all important topics. Students should also download free pdf of Printable Worksheets for Class 10 Biology prepared as per the latest books and syllabus issued by NCERT, CBSE, KVS and do problems daily to score better marks in tests and examinations

Class 10 Biology students should refer to the following printable assignment in Pdf for Life Process Respiration in standard 10. This test paper with questions and answers for Grade 10 Biology will be very useful for exams and help you to score good marks

Question. Which one of the following organisms respires through the skin?
(a) Blue whale
(b) Salamander
(c) Platypus
(d) Peacock

Question. The first enzyme that the food encounters in human digestive system is :
(a) Pepsin
(b) Trypsin
(c) Chymotrypsin
(d) Amylase

Question. Haemoglobin is dissolved in Plasma of blood in:
(a) Earthworm
(b) Roundworm
(c) Tapeworm
(d) Insects

Question. Which one of the following organisms has a cellular respiratory pigment dissolved in plasma and is also a predaceous carnivore and shows matriphagy?
(a) Scorpion
(b) Cockroach
(c) Earthworm
(d) Sea cucumber

Question. Glucose is the prime source of energy in our body. However, it is stored in the form of glycogen in the muscle and liver of animals and in the form of starch in plants. As a result, everytime a cell requires glucose, it must hydrolyze glycogen which is an energy consuming process. Why does the cell store glycogen instead of glucose in free form?
(a) Glycogen is more compact and more hydrophilic.
(b) Storage of glucose in free form will consume more ATP.
(c) Glucose in the free form creates more osmotic pressure.
(d) Glucose is highly reactive molecule hence storing in the free form can result in unwanted reactions in the cells.

Question. A squirrel was eating a fruit on the ground. Suddenly, it was attacked by a dog. The squirrel rushed to the tree immediately and saved itself from the dangerous attack. What immediate changes are most likely to have taken place in the body of the squirrel?
A. Blood flows to the stomach for rapid digestion.
B. Adrenaline was secreted in the blood by the adrenal glands.
C. Heart beat becomes faster and pumps more blood so that muscles get more oxygen.
D. Adrenocorticotropic hormone is secreted in the blood and blood flows more towards the vital organs.
Select the correct combination of options given below:
(a) A and B
(b) A and C
(c) B and C
(d) C and D

Question. Microscopic examination of a blood smear reveals an abnormal increase in the number of granular cells with multiple nuclear lobes. Which one of the following cell Types has increased in number?
(a) Lymphocytes
(b) Monocytes
(c) Neutrophils
(d) Thrombocytes

Question. Which one of the following organs is NOT a site for the production of white blood cells?
(a) Bone marrow
(b) Kidney
(c) Liver
(d) Spleen

Question. Which of the following process occur only in animals?
(a) Respiration
(b) Nutrition
(c) Nervous control
(d) Hormonal control

Question. Root pressure is effective way transporting water in xylem. This pressure is generated
(a) In bright sunlight
(b) During night
(c) At very low temperature
(d) In high trees

Question : What is the difference between breathing and respiration?

Question : Write down the name of sound producing organ in man.

Question : What is the role of diaphragm in respiration?

Question : What is the specific reason for muscle cramps that are caused due to sudden physical activity?

Question : 1. Write the use of cartilaginous rings in trachea?

2. What prevents entry of food particles into wind pipe?

Question :   The air entering our nose is generally cold and contains dust particles. How is the air made warm and free of dust particles inside the respiratory tract?

Question :   What is the significance of residual volume of air that lungs always contain?

Question : What are the adaptations in plant leaves to satisfy the oxygen requirement for aerobic respiration?

Question : Instant source of energy is ___________.
a. Sucrose
b. Fats
c. Glucose
d. Amino acids
Answer : C
1. c. Glucose
Explanation: Glucose is simple sugar which is formed when carbohydrate get broken. Also, the carbohydrates get digested into glucose. Since, glucose does not have to be digested, it acts as an instant source of energy
Question : Out of the four experimental set-up shown below, which one will demonstrate the evolution of carbon dioxide during respiration of germinating seeds ? 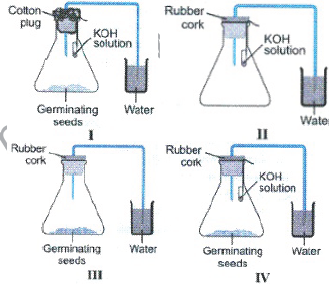 Question : Why are glomeruli considered as dialysis bags?
Answer : The main fimetion performed by the glomeruli is selective filtration. They filter small molecules containing glucose, salts, urea, and liquid senim. Etc. The large molecules such as proteins remain in blood. Thus, glomenili of the kidneys function as dialysis bags.

Question : What is the role of saliva in the digestion of food?
Answer : The saliva contains an enzyme called salivary amylase that breaks down starch which is complex molecule into glucose.

Question : What is villi? What are its functions?
Answer : Finger like projection present in the inner lining of small intestine are called villi. They increase the surface area for the absorption of digested food in the small intestine.

Question : What is the role of glomerulus in kidney?
Answer : Glomerulus is a group of capillaries present in the cup like Bowman’s Capsule. It receives blood from renal artery which brings excretory wastes from body to the kidney. It filters water, salts, glucose, urea, the nitrogen containing end products of proteins and yellow bile compounds from the liver.

Question : Why is it essential to match the blood groups of donors and receiver person before arranging transfusion of blood?
Answer : RBC’s of blood carries antigen as well as antibody. If blood is not matched before transfusion then blood of receiver start producing antibodies against donor blood and destroys blood cells, this causes deficiency of blood and causes death.

Question : While eating you are advised not to talk. Why are you advised so?
Answer : We are advised so because while eating some food particles might enter the wind pipe which can lead to choking.

Question : In the process of Photosynthesis food A is prepared which gets converted into food B. What are A and B? Why is A converted to B?
Answer : Food A is glucose and food B is Starch. A is converted to B as B is insoluble form of carbohydrate. It is more compact and hence, suitable for storage.

Question : Leaves of a healthy potted plant were coated with petroleum jelly. How will it affect the plant? State two reasons.
Answer :The plant will not remain healthy for long due to the following reasons:-

Question : What will be the outcome if a farmer foods his field everyday?
Answer : Respiration of plants will be affected because the oxygen present in the interspaces of the soil will be replaced by water.

Question : Name the areas in a woody stem through which respiratory exchange of gases take place.
Answer : In woody stem, the bark has lenticels for gaseous exchange.

Question : What is the significance of photosynthesis?
Answer : Photosynthesis is the most important and basic process which sustains life on this earth. It has manifold significance such as:
a. It synthesises food from inorganic substances. This food becomes the ultimate source of energy and life for all the living organisms.
b. It is the only known method which release oxygen in the atmosphere and keeps the O2 concentration constant. The consumption of O2 by living organisms during respiration is compensated by photosynthesis.
c. It also helps to keep the CO2 concentration in the atmosphere constant. The CO2 being released due to the respiration of living organisms is being incorporated into glucose during photosynthesis.
d. Coal, petroleum and natural gas are fossil fuels. These have been produced by the application of heat and compression on the past plants.
e. All useful plant products such as timber, rubber, resins, drugs, oils, fibres etc. are derived from the process of photosynthesis.
f. Green plants are the main producers of food in the ecosystem. All other organisms directly or indirectly depend on green plants for food.

Download Free printable worksheets for Class 10 Biology designed by expert teachers for all important chapters and topics and is available for free download in...
More..

Download free Printable Worksheets, test papers with questions and answers for Class 10 Biology for all important topics and chapters as per CBSE, NCERT, KVS...
More..