2 Pick out a colloid from the following : 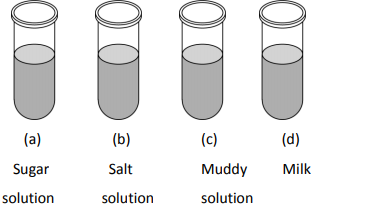 3. Which of the following is property of true solution ?

a) Homogeneous b) Heterogeneous c) Translucent d) None of these

4.The process of separation of insoluble solids from a liquid is called :

5. Which of the following mixtures is stable?

7. Which of the following represents a correct set of observations for a mixture of common salt and water?

2. To prepare a) a mixture b) a compound
using iron filings and sulphur powder and distinguish between these on the basis of:
i. appearance i.e., homogeneity and heterogeneity
ii. behaviour towards a magnet
iii. behaviour towards carbon disulphide as a solvent.
iv. effect of heat.

1.The color of Sulphur is :

2. FeS is not attracted by magnet because :

a) It has lost properties of its components. b) It is not made up of iron. c) It is a mixture d) It is black in color.

4. In FeS , the particles of iron and sulphur are :
a) Visible b) Not visible
c) Visible under microscope d) None of these
5. Iron reacts with sulphur to form FeS at :
a) High temperature b) Low temperature
c) Moderate temperature d) Below 0oC
6. When a mixture of iron fillings and sulphur is heated , the colour of the mixture changes from :
a) Black to yellow b) Yellow to black
c) Greyish yellow to black d) Black to brown
7. Which of the following has lowest melting point :
a) Iron b) Sulphur
c) Iron sulphide d) Carbon
3. To carry out the following reactions and classify them as physical or chemical changes.
a. Iron with copper sulphate solution in water.
b. Burning of magnesium in air.
c. Zinc with dilute sulphuric acid
d. Heating of copper sulphate
e. Sodium sulphate with barium chloride in the form of their solutions in water.
1. The colour of hydrated copper sulphate is :
a) Blue b) Colourless
c) Brown d) Yellow
2. What happens when Zn granules react with dilute sulphuric acid :
a) Bubbles due to colourless , odourless gas are formed and colourless solution is obtained .
b) No reaction takes place.
c) Pungent smelling gas comes out.
d) No gas evolved.
3. Fe + CuSO4 → FeSO4 + Cu is an example of :
a) Displacement reaction b) Decomposition reaction
c) Redox reaction d) Double decomposition
4. What happens when iron nails are added to copper sulphate solution :
a) The solution becomes pale green and reddish brown copper metal gets deposited.
b) The solution becomes colourless
c) There is no reaction d) Copper displaces iron
5. BaSO4 is :
a) White ppt b) Colourless
c) Blue solution d) Blue ppt.
6. Magnesium oxide , when placed on moist red litmus paper :
a) It remains red b) It turns blue
c) It becomes white d) It becomes black
7. What is the nature of SO2 :
a) Acidic b) Basic
c) Neutral d) All of these
4. To separate the components of a mixture of sand , common salt and ammonium chloride (or camphor) by sublimation.
1. Sublimation is the process in which :
a) Liquid changes into gaseous state
b) Solid changes into liquid state
c) Solid directly changes into gaseous form
d) Solid first converts into liquid , then into vapour form.
2. Which of the following substances sublimes on heating :
a) Iodine b) Camphor
c) Naphthalene d) All of these
3. In a mixture of sand, common salt and ammonium chloride , the substance that sublimes is:
a) Ammonium chloride b) Sand
c) Common salt d) All of these
4. Recovery of salt from salt solution in water can be done by :
a) Evaporation b) Distillation
c) Filtration d) None of these
5. What do you observe in the inner side of the funnel during sublimation of NH4Cl
a) Particles of white solid b) Yellow fumes
b) Vapours of sodium chloride d) No fumes are deposited
6. Which of the following mixtures cannot be separated by sublimation :
a) Ammonium chloride & sodium chloride b) Ammonium chloride & sand
c) Ammonium chloride & iodine d) Ammonium chloride & copper sulphate
7. A mixture of common salt and ammonium chloride is heated in a china dish covered with an inverted funnel with stem closed with a cotton plug. After the experiment the china dish will contain :
a) Common salt b) Ammonium chloride
c) Both (a) and (b) d) None of these.
5. To determine the melting point of ice and the boiling point of water.
1. Which of the following will help in determining the melting point of ice accurately ?
a) Ice made from tap water b) Ice made from distilled water
c) Ice made mixed with salt d) None of these
2. In determination of melting point of ice , the ice is contaminated with some non-volatile impurity, like common salt, melting point of ice will :
a) Increase b) Decrease
c) May increase or decrease d) Does not change
3. What is the melting point of ice?
a) 0oC b) 100oC
c) 273 K d) Both (a) and (c)
4. Which vessel is used to determine the melting point of ice ?
a) Beaker b) R B Flask
c) Conical Flask d) Measuring Flask
5. At what temperature ice and water both exist together under normal atmospheric pressure ?
a) Below 273.16 K b) Above 273.16 K
c) At 273.16 K d) None of these
6. In determining the boiling point of water , correct reading is obtained when :
a) Temperature start rising b) Water starts boiling
c) Whole of water evaporates d) Temperature becomes constant
7.Water evaporates faster :
a) In still air b) In humid air
c) In dry air d) In windy & dry air
6. To verify the law of conservation of mass in a chemical reaction.
1. What does the law of conservation of mass state?
a) It states that mass is neither created nor destroyed.
b) It states that mass can be created or destroyed.
c) It states that mass cannot be created but can be destroyed.
d) It states that mass can be created but cannot be destroyed.
2. If you melt 100 g of ice will you get the same mass of water ?
a) Yes b) No
c) May be d) Sometimes
3. State the chemical reaction between Barium Chloride (aqueous) & Sodium Sulphate (aqueous) .
a) BaCl2 (aq) + Na2SO4 (aq) → BaSO4 (white ppt) + 2NaCl (aq)
b) BaCl2 (aq) + Na2SO4 (aq) → BaSO3 (red ppt) + 2NaCl (aq)
c) Both (a) & (b)
d) None of these
4. Which of the following reaction does not conform to law of conservation of mass ?
a) Burning of candle b) Melting of ice
c) Fusion reaction occurring in sun d) Combustion of fuel
5. In the reaction 2NaN2→ 2Na +3N2 , if 850 g of NaN2 is decomposed to give 265.20 g of Na , how much N2 is produced ?
a) 584.80 g b) 265.20 g
c) 850 g     d) 484.20 g
6. In chemical reactions how does law of conservation of mass contribute in writing chemical equations ?
a) It does not help. b) Equations can be balanced by writing their correct co – efficient
c) Both (a) and (b) d) None of these
7. In accordance with the law of conservation of mass give the co-efficient of O2 in the equation:
C5H12 + O2 → 5CO2 + 6H2O
a) 4 b) 6
c) 8 d) 2