Class 12 Geography students should refer to the following printable assignment in Pdf for Human Settlements in standard 12. This test paper with questions and answers for Grade 12 Geography will be very useful for exams and help you to score good marks 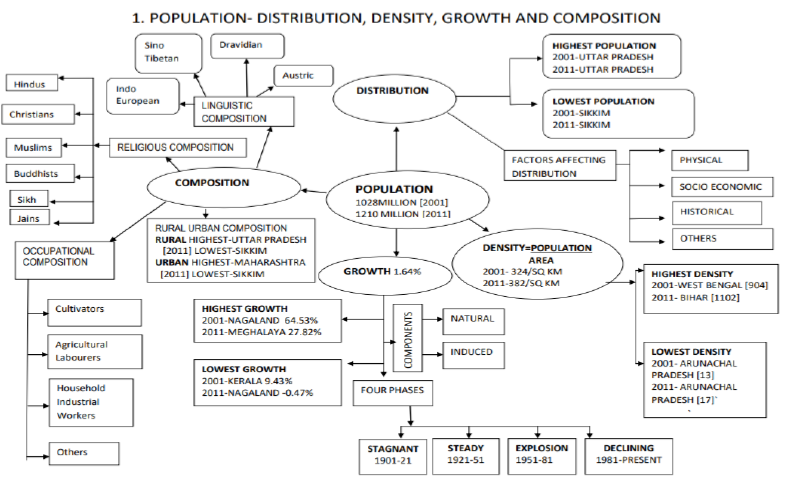 GIST OF THE LESSON
● Settlement -Cluster of dwellings of any type or size where human beings live.
● They vary in size from hamlet to metropolitan cities, they may be small and large, closed or spaced, and they may practice primary/secondary/tertiary activities.

DIFFERENCE BETWEEN RURAL AND URBAN SETTLEMENTS

SEMI-CLUSTERED SETTLEMENTS:
1. Formed due to result from tendency of clustered in restricted area of dispersed settlement
2. Segregation of large settlement may also cause
3. Some may be forced to live separately from the main village
4. Dominance group live in the center of the village
5. People of lower strata live in out skirt of the village
6. Most common in Gujarat and Rajasthan.

HAMLETED SETTLEMENTS
1. Physically separated and located in different place having common name
2. They are locally called panna, para palli,nagla ,dhani
3. They are motivated by social and ethnic factors
4. Found mostly in middle and lower ganga valley

DISPERSED SETTLEMENTS:
1. They are isolated huts or hamlets
2. Located on hills or agricultural lands
3. It is due to nature of terrain, and land resource, water
4. Found in Meghalaya, Uttaranchal, HP, and Kerala

EVOLUTION OF TOWNS IN INDIA

2. MEDIEVALTOWNS:
1. They are the headquarters of kingdoms
2. There are more than 100 towns
3. They are fort towns developed over ruined forts
4. Delhi, Hyderabad, Jaipur, Lucknow, Agra & Nagpur

3. MODERN TOWNS:
1. They are developed by British and other Europeans
2. Generally located on the coast
3. They were forts constructed by Europeans
4. Ex. Surat, Goa, Pondicherry, Mumbai, Madras, Calcutta

Classification of Towns on the basis of Population Size
1.Urban centre with population of more than one lakh is called a city or Class I town
2.Cities accommodating population size between one to five million are called metropolitan cities.
3.More than five million are mega cities

Question. The type of settlements found in the lower valleys of the Himalayas are
a. Semi-clustered
b. Hamleted
c. Dispersed
d. Clustered
Answer. b

Question. Which among the following is not an ancient city?
a. Varanasi
b. Harappa
c. Pataliputra
d. Madurai
Answer. b

Question. Cities having more than 5 million population are known as
a. Metropolitan city
b. Mega city
c. Class I city
d. Million city
Answer. b

Question. Which of these is not a medieval town?
a. Delhi
b. Hyderabad
c. Jaipur
d. Madurai
Answer. d

Question. Nagaland is a state in India having nucleated settlement. Identify the reason behind the same
a. Tribal tradition
b. Security reason
c. Scarcity of water
d. Caste
Answer. b

Question. In which one of the following environments does NOT one expect the presence of dispersed rural settlements-?
a. Alluvial plain of Ganga
b. Forest area of India
c. Desert area of Rajasthan
d. Hilly area of North –East
Answer. a

Question. Consider the following statements and choose the correct answer:
I. The clustered rural settlements are fragmented into several units physically separated from each other bearing a common name.
II. These units are locally called panna, para, palli, nagla, dhani, etc. in various parts of the country.
a. Only I is correct.
b. Only II is correct
c. Both the statements are incorrect
d. Both statements are correct and statement II correctly explains the statement
Answer. c 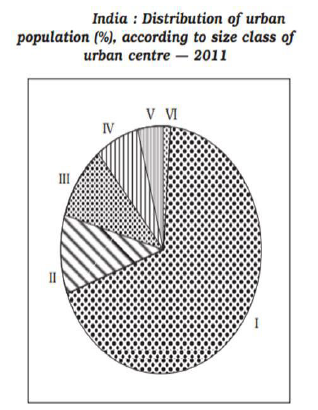 Question. Which among the following is not a megacity in India
a. Bengaluru
b. Hyderabad
c. Chennai
d. Kochi
Answer. d

Question. Which one of the following is NOT part of the definition of a town as per the census of India?
a. Population density of 400 persons per sq km.
b. Presence of municipality, corporation, etc.
c. More than 75% of the population engaged in the primary sector
d. Population size of more than 5,000 persons
Answer. c

Question. Urbanization is expressed in terms of
a. Absolute number
b. Ratio
c. percentage
d. none of above
Answer. c

Settlements vary in size and type. They range from a hamlet to metropolitan cities. With size, the economic character and social structure of settlements changes and so do its ecology and technology. Settlements could be small and sparsely spaced; they may also be large and closely spaced. The sparsely located small settlements are called villages, specialising in agriculture or other primary activities. On the other hand, there are fewer but larger settlements which are termed as urban settlements specialising in secondary and tertiary activities. The basic differences between rural and urban settlements are as follows:
• The rural settlements derive their life support or basic economic needs from land based primary economic activities, whereas, urban settlements, depend on processing of raw materials and manufacturing of finished goods on the one hand and a variety of services on the other.
• Cities act as nodes of economic growth, provide goods and services not only to urban dwellers but also to the people of the rural settlements in their hinterlands in return for food and raw materials. This functional relationship between the urban and rural settlements takes place through transport and communication network.
• Rural and urban settlements differ in terms of social relationship, attitude and outlook. Rural people are less mobile and therefore, social relations among them are intimate. In urban areas, on the other hand, way of life is complex and fast, and social relations are formal

Question. The sparsely located small settlements are called ………….., specializing in agriculture or other primary activities.
a. towns
b. cities
c. villages
d. None of these.
Answer. c

Question. Which of these statements is not true?
a. Villages are rural settlements that specialize in primary activities such as forestry, farming, fishing, diary, etc.
b. Rural settlements are centers of manufacturing finished goods
c. Cities provide goods and services to both urban dwellers and rural population living nearby
d. Urban settlements are based on tertiary activities.
Answer. b

Census of India classifies urban centres into six classes. Urban centre with population of more than one lakh is called a city or class I town. Cities accommodating population size between one to five million are called metropolitan cities and more than five million are mega cities. Majority of metropolitan and mega cities are urban agglomerations. An urban agglomeration may consist of any one of the following three combinations: (i) a town and its adjoining urban outgrowths, (ii) two or more contiguous towns with or without their outgrowths, and (iii) a city and one or more adjoining towns with their outgrowths together forming a contiguous spread. It is evident from Table 4.2 that more than 60 per cent of urban population in India lives in Class I towns. Out of 468 cities, 53 cities/ urban agglomerations are metropolitan cities. Six of them are mega cities with population over five million each. More than one-fifth (21.0%) of urban population lives in these mega cities. Among them, Greater Mumbai is the largest agglomeration with 18.4 million people. Delhi, Kolkata, Chennai, Bengaluru and Hyderabad are other mega cities in the country.

Question. Which of the following factors are not responsible for the different kind of rural settlements found in India?
a. Nature of terrain
b. Availability of water
c. Defiance against thefts and robberies
d. Planning structure
Answer. d

Question. Which of the following possess a good example of Fort town?
a.Delhi
b.Jaipur
c. Agra
d. All of the above
Answer. d

Question. Which of the following urban agglomerations is the largest agglomeration?
a. Greater Mumbai
b. Delhi
c. Chennai
d. Bengaluru
Answer. a

Question. Which of the following features is not associated with urban areas?
a. Cities act as nodes of economic growth
b. Social relations are formal
c. Urban people are less mobile
d. Urban settlements depend on processing of raw materials, manufacturing of finished goods and a variety of services
Answer. c

Question. Write the factors which affect the types of settlements in India.
Answer. (i) Physical feature-
A- Nature of land-Relief
B- Altitude
C- Climate and water supply.
(ii) Cultural and human factors-
A- Caste
B- Religion.
(iii)Security factors
A- Political disturbances
B- War.

Question. What are garrison towns? What is their function?
Answer. Garrison towns are those towns which are established for security functions during the British rule. Their main function is related to defense. For example, Ambala, Jalandhar, Babina, etc.

Question. What factors are responsible for different types of human settlements?
Answer. There are various factors and conditions responsible for having different types of rural settlements in India. These include:
● Physical features – nature of terrain, altitude, climate and availability of water
● Cultural and ethnic factors – social structure, caste and religion
● Security factors – defence against thefts and robberies

Question. Discuss the features of different types of rural settlements with examples.
The Different types of rural settlements are:
Answer. 1. Clustered Settlements-It is a compact or closely built up area of houses. Such
Settlements are generally found in fertile alluvial plains and in the north-eastern states. ex-Gangetic plains of U.P.
2. Semi-Clustered Settlements-In such settlements, the land-owning and dominant
community occupies the central part of the main village,whereas people of lower strata of society and manual workers settle on the outer flanks of the village. ex-Gujarat andRajasthan plains.
3. Hamleted Settlements-When Settlement is fragmented into several units bearing a common name. These units are locally called' Panna, Para, Palli, Nagla, Dhani etc.ex-Chhattisgarh and lower valleys of the Himalayas.
4. Dispersed Settlements-Such settlements appear in the form of isolated huts or hamletsof few huts in remote jungles or on small hills with farms or pasture on the slopes.ex-Meghalaya,Uttarakhand,Himachal Pradesh.

Question. Discuss the classification of Indian towns on the basis of their evolution in different periods. Also give their features.
Answer. The classification of Indian towns on the basis of their evolution in different periods are as follows :
a. Ancient Towns:
i. The number of towns in India have a historical background spanning over 2000 years. Most of them have developed as religious or cultural centres.
ii. One of the important towns among the ancient towns is Varanasi.
iii. Examples of ancient towns: Prayag (Allahabad) Pataliputra (Patna), Madurai.
b. Medieval Towns:
i. In the medieval period there are about 100 existing towns.
ii. Most of them are headquarters of kingdoms and principalities. These are fort towns which came up on the ruins of ancient towns.
c. Modern Towns:
i. In India, European and British and European developed Modern Towns.
ii. Starting their foothold on coastal locations they first developed some trading ports such as Surat, Daman and Diu, Goa, Pondicherry, etc.
iii. Then the British consolidated their hold around three principal modern towns Mumbai (Bombay), Chennai (Madras) and Kolkata (Calcutta) and built them in British style.
iv. Rapidly extending their domination either directly or through control over the princely states they established their administrative centres, hill towns as summer resorts and added administrative, new civil and military areas to them.
v. Towns based on modern industries also evolved after 1850. Example: Jamshedpur. 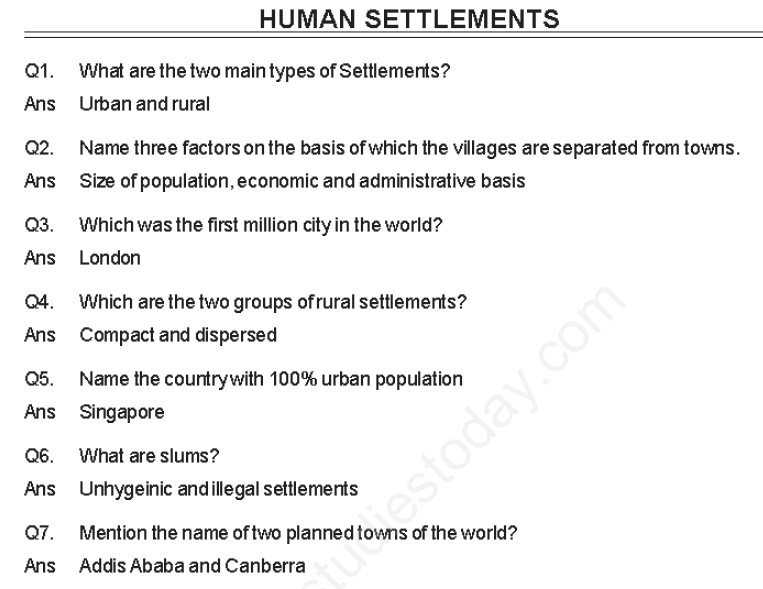 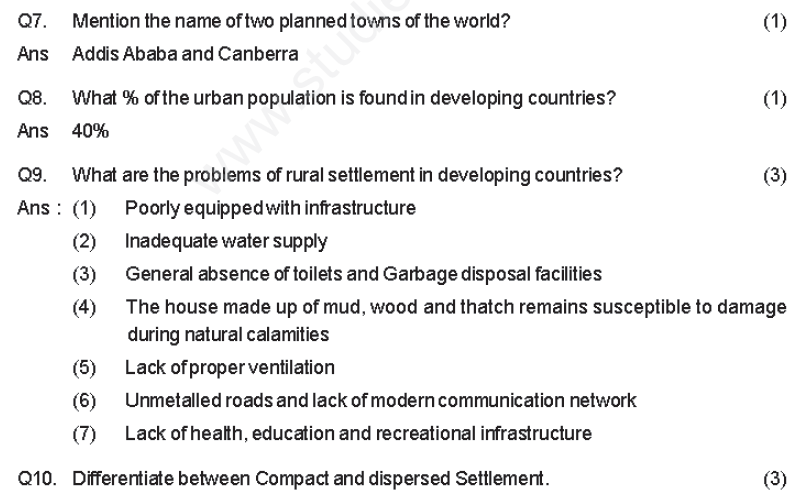