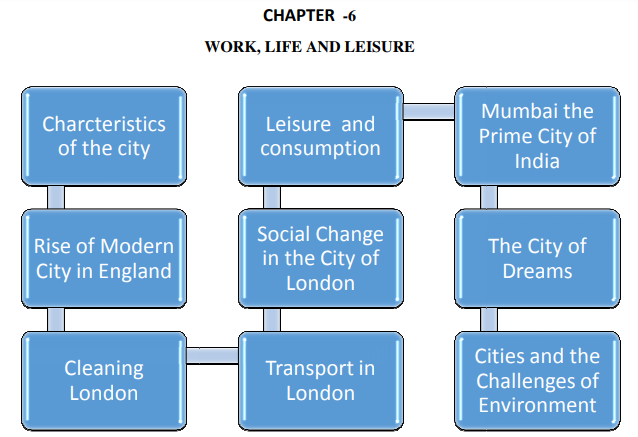 IMPORTANT CONCEPTS OF THE LESSON
◊ Characteristics of the City and industry. Some cities were metropolises and others were urban centres.
◊ Industrialisation and the rise of modern city in England Manchester attracted large number of migrants like clerks, shopkeepers soldiers, servants, beggars, etc.
◊ Housing – Labours lived in cheap and unsafe tenements, dang
◊ Tenement. Dwelling place, e.a larger city.
◊ Philanthropist. A person who is concerned about the welfare of the mankind
◊ Green belt. Area of open land with plants and trees for preservation around the city, maintaining natural habitation
◊ Asphyxiation. Suffocation due to lack of oxygen supply in the blood
◊ Reclamation. Bring wasteland under cultivation make it livable and cultivable.
◊ Individualism.Social theory favouring freedom of individual individuals

• The early industrial cities of Britain such as Leeds and Manchester attracted large numbers of migrants to the textile mills set up in the late eighteenth century.
• Apart from the London dockyards, five major types of industries employed large numbers: clothing and footwear, wood and furniture, metals and engineering, printing and
stationery, and precision products such as surgical instruments, watches, and objects of precious metal.
• Compulsory Elementary Education Act was passed in 1870
• The London underground railway partially solved the housing crisis by carrying large masses of people to and from the city.
• Chartism is a movement demanding the vote for all adult males
• Bombay was a group of seven islands under Portuguese control.
• In 1661, control of the islands passed into British hands after the marriage of Britain’s King Charles II to the Portuguese princess.
• The East India Company quickly shifted its base from Surat to Bombay.
• At first, Bombay was the major outlet for cotton textiles from Gujarat.
• Later, in the nineteenth century, the city functioned as a port through which large quantities of raw materials such as cotton and opium would pass.
• Gradually, it also became an important administrative centre in western India, and then, by the end of the nineteenth century, a major industrial center.
• Bombay became the capital of the Bombay Presidency in 1819, after the Maratha defeat in the Anglo-Maratha war.
• The first cotton textile mill in Bombay was established in 1854.
• By 1921, there were 85 cotton mills with about 146,000 workers.
• Like the European elite, the richer Parsi, Muslim and upper caste traders and industrialists of Bombay lived in sprawling, spacious bungalows
• Chawls were multi-storeyed structures which had been built from at least the 1860s in the ‘native’ parts of the town.
• The Bombay Governor William Hornby approved the building of the great sea wall which prevented the flooding of the low-lying areas of Bombay.
• In 1864, the Back Bay Reclamation Company won the right to reclaim the western foreshore from the tip of Malabar Hill to the end of Colaba
• A successful reclamation project was undertaken by the Bombay Port Trust, which built a dry dock between 1914 and 1918 and used the excavated earth to create the 22-acre
Ballard Estate. Subsequently, the famous Marine Drive of Bombay was developed.
• Harish Chandra Sakharam Bhatwadekar shot a scene of a wrestling match in Bombay’s Hanging Gardens and it became India’s first movie in 1896.
• Dadasaheb Phalke made the film Raja Harishchandra (1913).
• By 1925, Bombay had become India’s film capital, producing films for a national audience.

• Most of the people in the film industry were themselves migrants who came from cities like Lahore, Calcutta, Madras and contributed to the national character of the industry.
• Those who came from Lahore, then in Punjab, were especially important for the development of the Hindi film industry.
• Many famous writers, like Ismat Chughtai and Saadat Hasan Manto, were associated with Hindi cinema.
• Metropolis – A large, densely populated city of a country or state often the capital of region.
• Older cities like London changed dramatically when people begun pouring in after the industrial revolution. Factory or workshop owners did not house the migrant workers.
Instead individual landowners put up cheap, and usually unsafe, tenements for the new arrivals.
• Temperance movement – a largely middle class led social reform movement which emerged in Britain and America from the 19th century onwards. It identified alcoholism as the cause of the ruin of families and society and aimed at reducing the consumption of alcoholic drinks particularly amongst the working classes.
• Libraries art galleries and museums were established in the 19th century to provide people with a sense of history and pride in the achievements of the British.
• Baron Haussmann was well known for rebuilding Paris.
• 10-hour Movement was started for limiting the hours of work in the factories.
• The first smoke nuisance legislation in India was made in Calcutta
• Ebenezer Howard developed the principle of Garden City
• The first underground railway was between Paddington to Farrington

Q.1 - :What steps were taken to clean up London?
• Attempts were made to decongest localities, green the open spaces reduce pollution and landscape the city.
• Large blocks of apartments were built.
• Demands were made for ‘New Lungs’ for the city and the idea of green belt around London was offered.

Q.3 - :How did people entertain themselves in the ’chawls‘?
• Magicians, Monkey players or acrobats used to perform their acts on the streets.
• The Nandi bull used to predict the future.
• Chawls were also the place for the exchange of news about jobs, strikes, riots or demonstrations.

Q.4 - :Explain the social change in London which led to the need for underground
• British made a million houses, single family cottages.
• Now people could not walk to work and this led to the development of underground railways.
• By 1880, the expended train services were carrying 40 million passengers in a year.

Q.5 - :What was the status of the women folk in the conservative industrial towns?
• Women of upper and middle classes faced higher level of isolation, although their lives were made easier by domestic maids.
• Women who worked for wages had some control over their lives particularly among the lower social classes.
• As women lost their industrial jobs and conservative people railed against their presence in public plans, women were forced to withdraw into their homes.

LONG ANSWER TYPE QUESTIONS
Q.1’- :Bombay was a prime city of India .‘Justify by giving examples .
• It was the major outlet for cotton textile from Gujarat.
• It functioned as a major port city.
• It was an important administrative centre in western India.
• It soon emerged as a major industrial centre.
• The opening of the Suez Canal in 1869 brought the west close to Bombay.

Q.2 - :Describe the life in chawls?
• Chawls were multistoried structure built and owned by private landlords such as Merchants, bankers and building contractors.
• Each chawl was divided into smaller one room tenements which had no private toilets.
• Many families could reside at a time in a tenement.
• People had to keep the window of their rooms closed even in humid weather due to close proxy of filthy gutters, buffalo stables etc.
• Though water was scarce and people often quarreled every morning for a turn at the top observers found that house were kept quite clean.

Q.3 -:Explain the life style of workers of mid-19th century in Britain?
• In most of the industries the demand for labour was seasonal.
• The workers were getting very low wages.
• Factories employed large numbers of women.
• Most of the workers were living in slums.
• Factories or workshop owners did not house the migrant workers.
• For the poor workers the street often was the only place for rest, leisure and fun.

Q.4 - :Describe the problems of traveling in the underground railway?
• People were afraid to travel underground.
• The Compartments were over crowed and polluted by smoke.
• The atmosphere was a mixture of Sulphur, coal and dust with fuel fumes from the gas lamps.
• Many felt that the iron monsters added to the mess and unhealthiness of the city.
• Suffocation due to lack of oxygen supply and heat.

Q.5 What is referred to as ’HAUSSMANISATION‘of Paris?
• In 1852, Louis Napoleon III wanted to rebuild the city of Paris and appointed Baron Haussmann, the chief architect, as the prefect of the seine.
• His name has come to stand for the forcible reconstruction of cities to enhance their beauty and order
• The poor were evicted from the centre of Paris.
• For 17 years after 1852, Haussmann rebuilt Paris straight broad avenues or boulevards and open spaces were designed and full- grown trees were transplanted.
• By 1870, one fifth of the streets of Paris were Haussmann’s creation. Bus Shelter sand tap water was introduced.
• The whole process is referred to as Haussmanisation of Paris.

Question Bank
1. How did the condition of women workers change from 19th to 20th century in London?
2. Why well-off Londoners supported the need to build housing for the poor in the 19th century?
3. Why was the city of London like a powerful magnet for migrant population?
4. Give any three changes in the urban family life by the twentieth century.
5. “Singapore presented a good example of planned and organized city” Justify

5 marks
1. What are the values you learn from cities challenge to environment?
2. Explain with examples how Bombay films dealt with the arrival of new migrants in the city and their encounters with real pressures of daily life.
3. Why did London dockworkers go on strike?