Class 10 Social Science students should refer to the following concepts and notes for Democracy And Diversity in standard 10. These exam notes for Grade 10 Social Science will be very useful for upcoming class tests and examinations and help you to score good marks 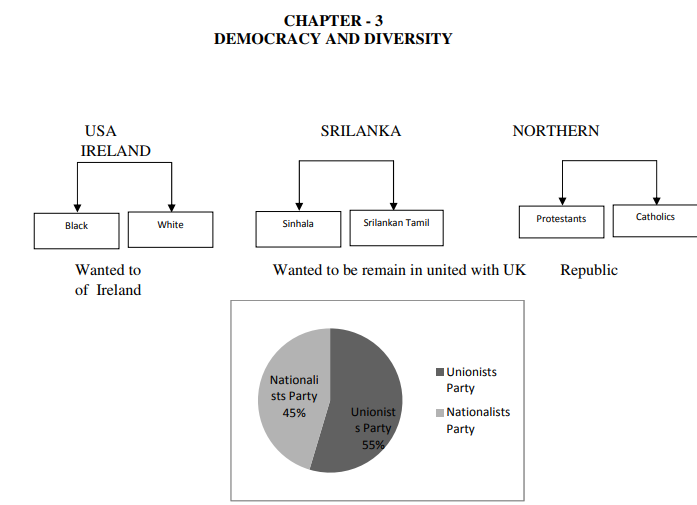 Division of the society on the basis of language, region, caste, colour, race or sex. It signifies linguistic and regional diversity.

A series of events and reform movements with the aim of abolishing legal, racial discrimination against African-Americans. Martin Luther King Jr. started the movement in 1954.This movement practiced non-violent methods of civil disobedience against racially discriminatory laws and practices.

Afro-American, Black American or Black are the terms used to refer mainly to the descendants of Africans who were brought into America as slaves between early 17th and 19th century.

It was a movement started by black people in 1966(1966-1975) against racism and the practice of apartheid. It was a militant movement advocating even violence if necessary to end racism in the US .

It refers to communities who are less than half of the total population of the country.The idea of minority at national level is totally different from what it is at state level.

Homogenous Society signifies absence of significant ethnic differences. It is a society that has similar kinds of people or inhabitants.

Social community formed on the basis of different cultures is known as theMulticultural community. This happens mostly due to the practice of migration when people bring with them their own culture.

Three determinants (factors) for the outcome of politics of social divisions –
• How people perceive their identities- eg-to be an Indian though belonging to different state
• How political leaders raise the demands of any community- eg- The demand for ‘only Sinhala’ in Srilanka brought distrust among Tamils.
• How the govt. react to different groups- eg –Willing to share power and be accommodative like in Belgium

Advantage of social division in democracy-
• Can express their grievances and the govt. attend to it
• Intensity of social division is reduced by canceling one another out, through their expressions(being accommodative)
• Raise their issues in a peaceful manner for seeking votes

ANSWER THE FOLLOWING -
Q1. Mention three similarities between Tommie Smith and John Carlos.
• Both were African – Americans.
• Both won medals at the Mexico Olympic Games in 1968.
• Stood against racial discrimination which was practiced against the Africans in America.

Q2. Who was Peter Norman? Why did he support Carlos and Smith? What punishment did he get for this?
• Peter Norman was an Australian Athlete.
• Norman wore a human rights badge on his shirt during the ceremony to show his support to the dissent of two American athletes.
• Norman was not included in the Australian team for the next Olympic.

Q 3. How do class and religion overlap with each other in Northern Ireland?
• In Northern Ireland the population is divided into two major sects of Christianity – 53% are Protestants and 44% are Roman Catholics. The Catholics are more likely to be poor
and suffered a history of discrimination. On the other hand, the Protestants are rich.
This resulted in conflicts between the two.

Q.5- What do you know about origins of social differences?
• Social differences are mostly based on accident of birth. Some of the differences are based on our choices.
• By Birth- Normally we do not choose to belong to our community, we belong to it simply because we are born into it.
• By choices- Some people are atheists-they do not believe in God or any religion,
some choose to follow religion other than in which they were born.

Question. Which event in the USA is referred as the Black Power Movement (1966-73)?

Ans. The movement to end racism.

Question. What steps should be taken according to you to promote the unity among the people of India?

Ans. Following steps can be taken to promote the unity among Indians :

(i) There should be equal opportunities of representation and no discrimination in the society.

(ii) Participation of more and more people in political affairs should be encouraged.

(iii) Religious tolerance and the support to minority groups should be given and they should be allowed to voice their opinion.

Question. Explain with example the role of political leaders to determine the outcome of politics of social division.

Ans. It depends on how political leaders raise the demands of any community. For example :

(i) it is easier to accommodate demands that are within the constitutional framework and are not at the cost of another community.

(ii) The demand for 'only Sinhala' was at the cost of the interest and identity of the Tamil community in Sri Lanka.

(iii) In Yugoslavia, the leaders of different ethnic communities presented their demands in such a way that these could not be accommodated within a single country.

Question. "Social divisions exist in most of the countries." Explain.

Ans. Social division of one kind or the other exists in most of the countries.

(ii) Countries, such as Germany and Sweden, that were once highly homogeneous are undergoing rapid change with influx of people from other parts of the world.

(iii) Migrants bring with them their own culture and tend to form a different social community. In this sense, most countries of the world are multicultural and have social division.

Question. Politics and social divisions must not be allowed to mix. Substantiate this statement, with five arguments.

Ans. (i) Democracy involves competition among various political parties. Their competition tends to divide any society. If they start competing in terms of some existing social divisions, it can change social division into political division and lead to conflict, violence or even disintegration of a country.

(ii) Hundreds of civilians, militants and security forces were killed in the fight between Unionists and Nationalists and between the security forces of the UK in Ireland.

(iii) Political competition along religious and ethnic lines led to the disintegration of Yugoslavia into six independent countries.

(iv) In a democracy, it is only natural that political parties would talk about the social divisions, make different promises to different communities, look after due representation of various communities, but often it takes a negative turn.

(v) Social divisions affect voting in most countries. People from one community tend to prefer some party to others. In many countries, there are parties that focus only on one community, which does not serve the greater cause.

Question. Describe the consequences of Smith and Carlos reaction to the racial discrimination.

Ans. (i) Carlos and Smith were held guilty for violating the Olympic spirit by making political statement.

(ii) Medals were taken back.

(iii) Norman was not included in the Australian team.