Class 10 Social Science students should refer to the following concepts and notes for Globalisation And The Indian Economy in standard 10. These exam notes for Grade 10 Social Science will be very useful for upcoming class tests and examinations and help you to score good marks 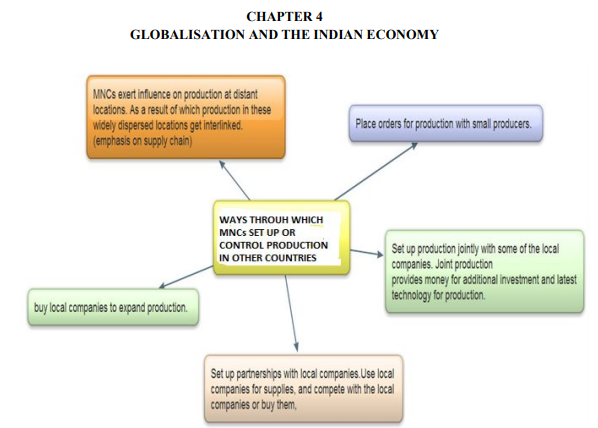 • An MNC is a company that owns and controls production in more than one nation.

• Foreign Investment is investment made by MNCs.

• Liberalization means the removal of barriers and restrictions set by the government on foreign trade.

• Governments use trade barriers to increase or decrease (regulate) foreign trade to protect the domestic industries from foreign competition. Ex. Tax on imports. Around 1991, government India adopted the policy of liberalization

• World Trade Organization (WTO) was started at the initiative of the developed countries. Its main objective is to liberalize international trade.

• Privatization means transfer of ownership of property from public sector to private sector.

• Business Process Outsourcing (BPO) is the contracting of non primary business activities and functions to a third party service provider.

• Multi lateral Agreement is agreement entered by group of countries.

• Mixed economy is a system in which private and public sector work together.

• Economic Reforms or New Economic Policy is policy adopted by the Government of India since July 1991. Its key features are Liberalization, Privatization and Globalization (LPG)

2. What do you mean by FDI?
Foreign Direct Investment.

3. What are SEZ?
Special Economic Zone

5. What is the most common route for investments by MNCs in countries around the world?
Buy existing local companies

1. What are the advantages of foreign trade?
• Foreign trade gives opportunity to reach buyers in domestic and international markets.
• Choice of the consumers expands manifolds
• The process of similar goods in the markets tends to become equal

3. What are the factors that attract MNCs to set up factories in third world countries?
• For better prospectus and profits.
• Favourable government policies
• Availability of highly skilled man power easily and cheaply.

5. What is Tax Barrier? How it helps in regulating the foreign trade?
• In some cases it may be necessary to protect local manufacturers from imports.
• Countries set up Tax Barriers to protect their National Interest
• They may be in the form of high import duty and quota restrictions.

7. How does liberalization contribute to the expansion of markets in India?

• As a result of liberalization foreign companies are able to set up their offices and markets in India
• The Government of India established many Special Economic Zones where all sorts of facilities made available to foreign companies.
• Foreign companies were allowed flexibility in lab our laws so that they could employ workers for short period.

8. How has technology stimulated the globalization process?
• Improvement in transportation technology has made faster delivery of goods across long distances at lower rates.
• Improvement in IT Sector
• Invention of Computers, Internet, Mobile Phones, and Fax etc. has made contacts with people around the world quite easy.

2. What are the factors that have enabled globalisation?
• Rapid improvement in technology
• Development in information and communication technology.
• Liberalization of foreign investment policies of the governments.
• Pressure from international organizations such as WTO

3. Explain any five positive impacts of globalisation.
• Globalisation and greater competition among producers have been of advantage to consumers, in terms of wider choice, improved quality and lower prices.
• Enormous increase in foreign investment through MNCs.
• Several of the top Indian companies have been able to benefit from globalisation as they got newer technology and collaboration with foreign companies.
• Some large companies emerged as MNCs Ex. Tata Motors, Infosys.
• New opportunities are created for companies providing services especially those involving IT.
• It has enabled the third world countries to get better technology at a cheaper rate

• The benefits of globalization were not equally distributed among the people, and generally the upper class, in terms of income and education, only got benefited.

• Agricultural sector has been hard hit by the policies of globalization.

5. What measures can be taken by the government to make globalization fair?

• The policies of the government must focus on protecting the interests of all sections of the people.

• Government should ensure that lab our laws are properly implemented and workers get their rights.

• In certain situations, trade and investment barriers should be imposed.

• The government should negotiate at the WTO for fairer rules.

6. What were the main reasons for imposing barriers in Indian after independence?

• The term liberalization means the removal of barriers and restrictions set by the government on foreign trade.

• Trade barriers were used to protect the domestic industries from foreign competition. E.g. Tax on imports.

• It was considered necessary to protect producers within the country from foreign competition.

• The competition from foreign competitors could have crippled the new born industries in India.

7. Critically examine the functioning of WTO

• The operations of the WTO will lead to undue interference into the internal affairs of different countries.

• Serves the interests of the developed nations.

• Access to markets of developed countries by developing countries is negligible’